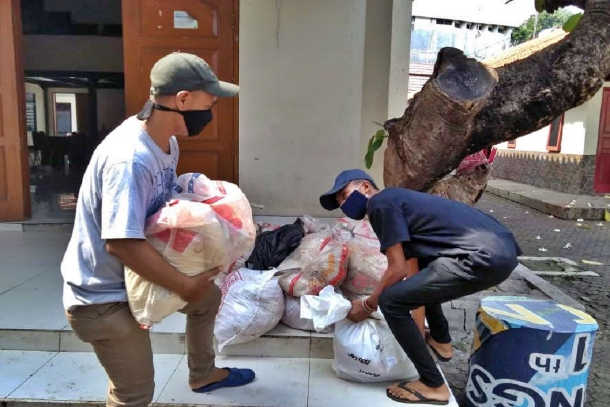 Activists are appealing for food donations to help thousands of cash-strapped university students living in rented accommodation in and around Indonesian capital Jakarta.

The students are going hungry because they cannot afford to buy food amid social distancing restrictions to curb the Covid-19 pandemic, while the Ramadan fasting month is also limiting access to food.

Antonius Hurung, from the Young Patriot Movement of East Nusa Tenggara (Garda NTT), which is organizing aid efforts, said the appeal was in response to reports about thousands of students who had run out of food.

"They chose to stay in their rented accommodation as the government has prohibited people from traveling. But they are now threatened with starvation,” he told UCA News on April 27.

He said there were at least 2,000 students that he knew of in need of food but the true number was almost certainly much higher. He said the group was still collecting information on how many students needed help.

Since the initiative was announced last week, the group had received nearly a ton of rice and instant noodles from donors. "We plan to distribute the food this week. We will deliver it directly to them,” Hurung added.

Firminus Kleofas Abu, a tourism student from Flores who lives in central Jakarta, said he is having difficulty finding food.

"Vendors are a rarity these days, especially during Ramadan where during daytime almost no one sells food,” he said. "We are also afraid to go out as Jakarta has a high number of infections."

Abu said he stayed in the capital to obey the government's travel restrictions and was still studying through distance learning.

Garda chairman Wilfridus Yons Ebit called for people in society to work together and help each other to alleviate the difficulties in this critical time. "Let's get together through this difficult time by making sure no one cries out in hunger," he said.

On April 24, the Jakarta city government announced the extension of social restrictions until at least mid-May.

All passenger flights have also been canceled until June 1, while all passenger train services have been halted until at least June 15.

As of April 27, Indonesia had recorded 8,882 coronavirus cases and 743 deaths, with Jakarta having the highest number of cases with 3,798 infections and 353 deaths.