The latest army assault on ethnic areas between April 29 and May 1 displaced more than 12,000 people 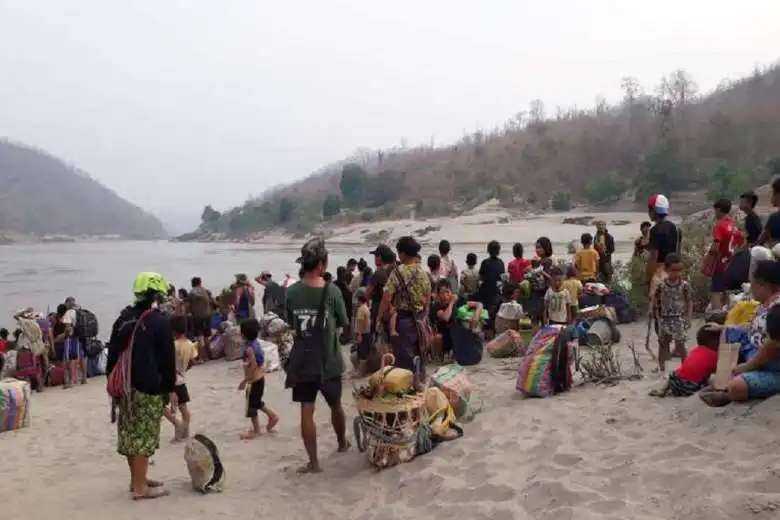 More than 12,000 ethnic Karen in Myanmar’s southeastern Karen and Mon states have been forced to flee their homes as the military continued its air strikes and mortar shelling since last Friday.

Families are hiding in caves as their homes burn while the military air strikes and mortar attacks continue. As of May 3, around 8,000 Karen villagers are hiding in Bilin area, Mon state, according to David Eubank, founder of Free Burma Rangers, a humanitarian group that has for many years provided healthcare to Karen villagers.

He said the military air strikes displaced 12,000 people in the period from April 29 to May 1.

Three villagers were injured and 10 houses were burned to the ground by the military in Lay Kay village, Bilin township, according to the Karen Human Rights Group (KHRG).

“The fleeing villagers are now facing acute security and health challenges, especially newborn babies and pregnant women, and are in need of humanitarian aid,” KHRG said.

The rights group said villagers fear returning home and worry about their houses being burned down.

At least 150,000 people have already been displaced in Karen state alone and they are in desperate need of food, medicine and shelter, according to the aid groups.

Relatively peaceful eastern Myanmar also witnessed the first air strikes in 20 years on March 27, 2021, after an army post was overrun near the border in an incident that claimed 10 lives.

The ongoing conflict has displaced more than 566,100 people, with a further 34,500 people seeking refuge across the border in India and 1,600 in Thailand, according to the United Nations Office for the Coordination of Humanitarian Affair report in April.

Her call came ahead of the ASEAN Humanitarian Assistance to Myanmar meeting which will be held on May 6.

Heyzer has strongly urged ASEAN leaders and donors to prioritize “principled engagement with diverse local humanitarian networks to effectively deliver aid to all communities in need.”

Predominantly Christian Karen state has seen more than 60 years of conflict between the military and the KNU which has left over 100,000 refugees, mostly ethnic Karen, in camps along the Thai border.

The Karen account for about 5 million of Myanmar’s 54 million people and are the third largest ethnic group after the Bamar and Shan. The majority of Karen, also known as Kayin, are Theravada Buddhists while around 15 percent are Christians. Many Karen were animists when Christian missionaries arrived in the 19th century.

JEFFREY RAM
When will the Western Christians feel the pain of suffering Christian minorities of Myanmar and other nations?
Reply