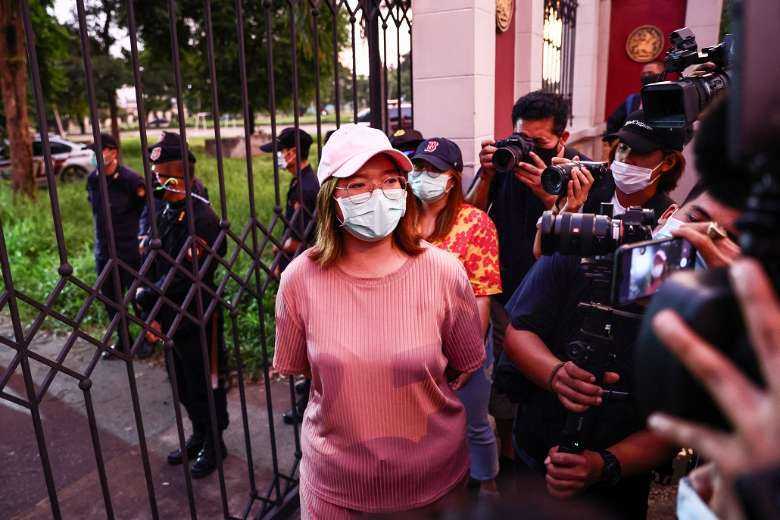 Student Union of Thailand spokesperson Panusaya ‘Rung’ Sithijirawattanakul stands by the gates of Bangkok Remand Prison, while awaiting the result of a bail hearing for three pro-democracy protest leaders on May 11. (Photo: AFP)

A young female pro-democracy activist has prompted Thai authorities to acknowledge that nearly 3,000 inmates have been infected with Covid-19 at just two prisons in Bangkok.

After her release on bail on May 6 from the Central Women’s Correctional Institution, Panusaya "Rung" Sithijirawattanakul, 22, a university student turned political activist who is facing a variety of charges from sedition to royal defamation, revealed in a Facebook post she had come down with the virus in jail. Many other inmates were also infected, she added.

In response, Aryut Sinthoppan, director-general of the Corrections Department, has admitted that 2,835 inmates had tested positive at Bangkok Remand Prison and the Central Women’s Correctional Institution, the capital's two largest prisons currently housing 3,238 and 4,518 inmates respectively.

“The Corrections Department has ordered all correctional facilities to set up an area for quarantine and a field hospital, with doctors and nurses on duty to provide treatment for the infected inmates,” Aryut said.

The revelation has sparked fears that the extent of the outbreak in Thailand has been far greater than the government’s official tally, which has recorded around 2,000 new daily infections around the country for weeks.

Thai prisons, which house nearly 310,000 inmates, have long been notorious for dismal conditions with chronic overcrowding in cells that often forces dozens of inmates to take turns sleeping on the floor side by side while lying on their sides to occupy less space.

“Sleeping quarters are often so close that prisoners report having to sleep on their sides to make room for everyone. Sleeping dormitories in Bangkok correctional facilities do not have beds; [they] are just empty rooms with prisoners expected to sleep on the floor. Former inmates have reported that these cramped sleeping conditions have had a toll on their health.”

Panusaya and several other leaders of a youth-led grassroots pro-democracy movement were arrested earlier this year over their roles in peaceful street rallies throughout much of last year during which participants called for Prime Minister Prayut Chan-o-cha, a former army chief who seized power in a coup in May 2014, to resign.

Demonstrators also demanded sweeping democratic reforms, including new constitutional limits on Thailand’s monarchy, which is officially portrayed as sacrosanct and a key pillar of the nation.

In response, the authorities have charged dozens of student leaders and ordinary protesters with crimes such as royal defamation and sedition.

If convicted of the various charges, many of them could be sentenced to decades in prison.