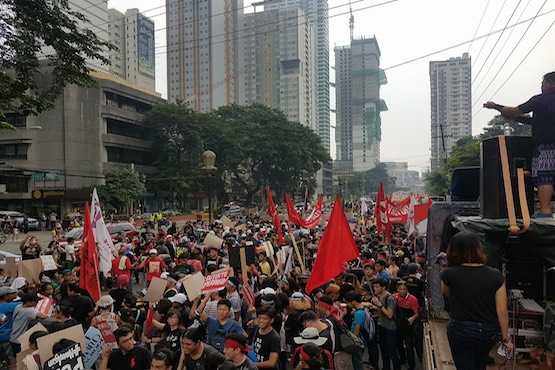 A column of least 20,000 marchers head to Manila's Luneta Park to protest what they say is creeping tyranny under President Rodrigo Duterte on Sept. 21, 2017. (Photo by Robert de Castro)

The protests came on the 45th anniversary of the declaration of martial law by the late dictator Ferdinand Marcos.

Catholic colleges and universities mobilized thousands of students from Manila and nearby provinces for The Movement Against Tyranny (MAT) protests.

The mood was buoyed by an announcement on Sept. 20 that Congress would return the Commission on Human Rights’ budget it had scrapped a week before.

"Once our conscience dies and we begin to accept evil as good, that is terrible. That is hard to correct," David said as he urged Catholics to speak out against a rising tide of extrajudicial killings linked to Duterte's drug war.

Organizers of the rally said tens of thousands were expected to demand "a halt to mass murder" and pledge to resist all forms of tyranny.

The rally branded the Duterte government as heir to the late dictator Ferdinand Marcos, who declared martial law on Sept 21, 1972.

Duterte has threatened to expand martial law on the southern Philippine island of Mindanao nationwide for a variety of reasons, including a refusal by communist rebels to accept a ceasefire without a final peace agreement.

While still popular, Duterte's government has been battered in the last month by a series of killings of young Filipinos, the four-month old war in Marawi city that has displaced half a million Filipinos, and unpopular policies he has had to rescind.

"Let this be a warning to President Duterte: we will not be intimidated or cowed into silence and inaction," said Raoul Manuel, MAT convenor representing the youth.

Manuel said MAT considered the reinstatement of the rights commission’s budget as a victory for the protest movement.

"We will continue to oppose any moves by the administration to restrict our rights," he said.

"The latter not only aids the political rehabilitation of the Marcoses but also employs the same fascist tactics and anti-people policies of the US-Marcos dictatorship, including threats to impose nationwide martial rule," said Karapatan executive director Christina Palabay.

"Duterte and his security cluster has utilized narratives and tactics straight out of Marcos’s playbook of repression, repeating and justifying rights violations, with increasing frequency and intensity," Palabay said.

Archbishop Socrates Villegas, president of the bishops' conference recalled the declaration of martial law 45 years ago.

"The vision forty five years ago was a new society where discipline was observed but opposition was silenced. The streets were clean but dead bodies were mixed with garbage in the dumping sites," he said.

"But the wheels of justice stopped turning and money was the right of only a lucky few," he pointed out.

"Our elders spoke in whispers for fear someone was spying. We had elections but we knew the results even before the ballots were cast. Television and radio were censored and newspapers were controlled."

Even under Duterte, the Philippines still has the gloss of a vibrant, raucous democracy, primarily because of its noisy social media scene.

But the well-oiled government propaganda machinery has made fake news a badge of honor in governance and on Sept. 18, Duterte admitted he makes up figures and intelligence claims to throw his enemies into disarray.