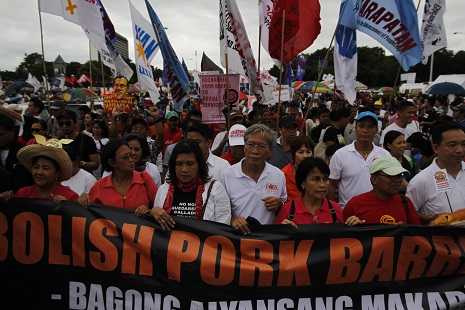 Tens of thousands of people marched against corruption in central Manila today in the largest protest against President Benigno Aquino's administration since he came to power three years ago.

Dubbed the ‘Million People March,’ the rally to Luneta Park in Manila’s old quarter was a protest at the Philippines notorious “pork barrel” fund.

The estimated 80,000 people at the march carried placards with “abolish pork barrel” slogans calling for the government to end the development funds handed out to Filipino lawmakers blamed for rampant corruption in one of a number of rallies held across the Philippines today.

Addressing the crowds in Manila, Cardinal Luis Antonio Tagle called on “everyone to see, listen and love the poor.”

Activist priest Robert Reyes challenged government leaders to resign. “To our [legislators], instead of trying to convince us with all sorts of explanations, ask yourselves: are you still capable of cleansing yourselves?”

Some 200 million pesos (US$4.5 million) is allocated to each of the country’s 24 senators and 70 million pesos to 294 lower house lawmakers, supposedly for development projects in their constituencies.

But a series of recent scandals and a probe by the government’s audit commission revealed missing funds, including some that were diverted to private bank accounts with less than 20 percent of monies found to have been used as declared.

Inday Espina-Varona of the online lobby group change.org said that hundreds of thousands of people have already signed an online petition calling for the abolition of the fund.

Aquino, who won the 2010 presidential election on an anti-corruption platform, reiterated an earlier promise that he would punish those found to have stolen public funds as he urged the public to monitor public spending.

“We will not allow anyone to be used to propagate the corrupt practices of a few,” he said at a speech in Manila on Monday. “We will make certain that the mistakes of the past are not repeated so that we may further ascertain that the people’s money is spent properly.”