Thousands march against land-grabbing in Bangladesh 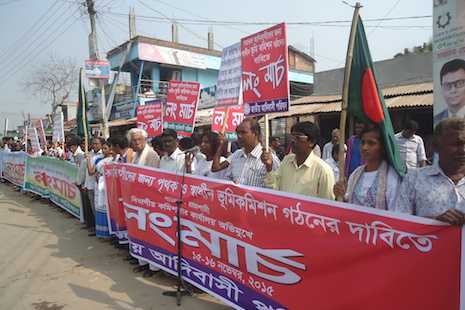 Thousands of Bangladeshi indigenous people call for a special land commission to resolve disputes, in a demonstration held on Nov. 16 in Rajshahi. (Photo by Liton Das)

Thousands of indigenous people took part in a two-day march in northern Bangladesh to press the government to establish an independent commission to end the problem of land disputes, which often impact minority communities.

The 60-kilometer march from Chapai Nawabganj to Rajshahi city Nov. 15-16 brought together about 3,000 people from dozens of indigenous groups.

The protesters submitted a nine-point memorandum to the Rajshahi divisional commissioner calling for the immediate establishment of an independent land commission to end what they claimed were "land-related abuses" committed against indigenous people in the northern part of the country.

"About 2 million indigenous people live in northern Bangladesh, and many face abuses including forced eviction, violence, rape and murder for land," said Rabindranath Soren, president of the National Adivasi Forum, an indigenous peoples' rights group, which organized the march.

"Thousands have fled their homes and migrated to other countries in fear of their lives," he said.

He said various governments have failed to keep pledges to end land-related violence by setting up a special land commission.

"All the governments have neglected indigenous peoples. In 2008, the (governing) Awami League promised it would end the repression of and abuses against indigenous peoples, but it has also failed to keep its promises," Soren said.

He warned of a bigger march on the capital, Dhaka, if Prime Minister Sheikh Hasina failed to meet the protesters' demands.

In Bengali Muslim-majority Bangladesh, about 3 million of the country's 160 million people belong to 45 indigenous, or tribal, groups.

The majority of them are Buddhists and animists, while about half the country's 500,000 Christians also come from indigenous communities.

These communities have long complained of the systematic grabbing of their land by Muslims, who they say often use fake documents or resort to acts of violence to get what they want.

Over the past four decades, more than 140 indigenous people have been killed, many women raped and some 10,000 forced to migrate abroad because of land disputes, according to the Dhaka-based Kapaeeng Foundation, a human rights group.

Bichitra Tirkey, 32, a Catholic mother of three from Naogaon district, took part in the march.

Tirkey claimed she was attacked and raped by Muslim men last year during a land dispute.

"I was attacked because they tried to grab my land with fake documents. But I didn't give up the fight and rescued my property after a seven-year battle," said Tirkey.

"If there was an independent land commission, indigenous people could have land disputes resolved quickly and properly," she said.

Soon after the march ended, a local government official dismissed the protest saying the demand for an independent land commission was "unacceptable."

"Indigenous people are not united and they lack knowledge about land and land rights. Existing laws are perfectly adequate to deal with land problems, so a separate land commission is not necessary," said Ashim Kurmar Sarkar, assistant commissioner of land in Chapai Nawabganj.