The protest comes amid fears that a prominent progressive political party could be disbanded in a judicial decision. 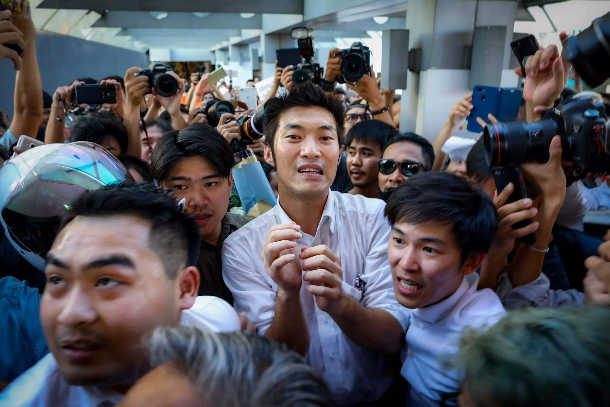 Thanathorn Juangroongruangkit, leader of Thailand's progressive Future Forward Party, is swept up in a crowd of his supporters during a pro-democracy rally in Bangkok (photo: ucanews.org reporter)

Some 12,000 people joined a pro-democracy event on Jan. 12 in a Bangkok park, in the largest public protest of its kind since the country's military overthrew a democratically elected government in 2014.

The participants in Bangkok, mostly young people, jogged and walked for three kilometers, with many of them holding up three fingers along the way. The salute has become a symbol of defiance among pro-democracy activists since the 2014 coup.

A rival pro-government rally held at another park in Bangkok drew a far smaller crowd.

"There is no democracy and no real freedom in Thailand," Chanchai Sangsawan, a university student who joined the pro-democracy protest in the Thai capital, told UCA News.

He said he joined the event with friends "to make a stand for our rights."

The protest was called last month following reports that the Future Forward Party, a prominent progressive political party, could be disbanded in a judicial decision later this month.

In years past several anti-establishment parties have been dissolved by the courts on various technicalities.

Future Forward, which enjoys widespread support among young voters, and its charismatic founder, Thanathorn Juangroongruangkit, 41, have been facing numerous legal cases, most of which were lodged by government agencies and pro-government activists.

Thanathorn was recently stripped of his status as a member of parliament accused of violating a law that prohibits parliamentarians from owning shares in media companies.

Numerous MPs of the ruling pro-military government coalition who were revealed to have broken the same law escaped without being prosecuted.

Thanathorn has warned that his party's dissolution could reignite the kind of raucous street protests that paralyzed parts of the capital for weeks and months on end.

Following elections, Army chief Prayuth Chan-o-cha reaffirmed as prime minister with a narrow majority thanks to a conservative coalition cobbled together from various newly formed parties.

Opposition politicians have criticized that the election rules, which were drawn up by military-backed appointees, worked in favor of pro-establishment political forces.

"We want a truly democratic government, not a dictatorship in disguise," stressed Tanawat Wongchai, a student activist who was an organizer of the "Run Against Dictatorship" event.