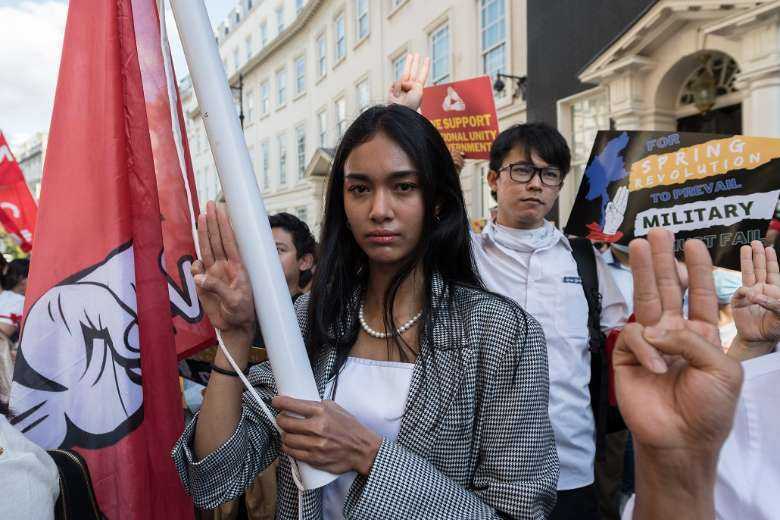 Myanmar celebrity May Myat Noe gives a three-finger salute as members of the British Myanmar community demonstrate outside the Myanmar embassy in London against the military government on Sept. 11. (Photo: Anadolu via AFP)

More than 1,000 people have been forced to flee their homes in Myanmar’s Chin state due to fighting that has escalated between the military and local militia groups in recent days.

Military airstrikes and heavy shelling on Sept. 10 forced people from Lungler village in Thantlang township, in Chin state to flee their homes and seek refuge in nearby villages, according to local media reports.

About 16,000 people from Myanmar have crossed into four Indian border states — Manipur, Mizoram, Nagaland and Arunachal Pradesh — to flee violence and repression that have escalated since the coup, according to Human Rights Watch.

The latest military offensive came after fighting between the military and local militia groups intensified in Chin state, a predominantly Christian area.

More than 16,700 people have already been displaced in several townships in the western state including those who are taking refuge at churches since fighting erupted in the region in May.

Fighting has also escalated in Gangaw township in Sagaing region, near Chin state and the Magway region where thousands of villagers, mostly Buddhists, fled their homes as a result of the military’s indiscriminate shooting and burning of houses, reports say.

At least 20 people, mostly teenagers, were killed by the military in Gangaw township, Sagaing division, on Sept. 10, according to local media reports.

The worst violence followed a call for a people’s defensive war by the National Unity Government (NUG), the shadow government in exile established by ousted lawmakers, activists and ethnic groups.

Fighting has intensified between the military and ethnic armed groups and local resistance groups in Chin, Kayah, Kachin, Karen and Shan states since February, leading to more than 200,000 people being displaced.

Myanmar has descended into political and economic turmoil and is at risk of plunging into civil war following the military coup on Feb. 1 that sparked mass protests. Nearly 1,100 people have been killed and at least 7,000 detained by the junta since then.

Meanwhile, the United Nations Credentials Committee, a nine-member panel including the United States and China, will meet on Sept. 14 to consider who should represent Myanmar at the U.N.  — ambassador Kyaw Moe Tun, who was appointed by the deposed government, or a representative of the junta which seized power seven months ago.

Both the NUG and the junta claim to be the rightful representative of Myanmar at the U.N. The junta said it dismissed Kyaw Moe Tun on Feb. 27 after he publicly denounced the military coup and called for the restoration of democracy at the General Assembly.

Some 358 civil society groups from inside and outside of Myanmar are urging the U.N. to retain Kyaw Moe Tun as the permanent representative of Myanmar.

In a letter sent to the members of the General Assembly on Sept. 13, the groups said Kyaw Moe Tun had provided a crucial voice at the U.N. for the people of Myanmar and the government that was toppled by the coup.

At the weekend, protests in cities and villages voiced support for the NUG and Myanmar’s ambassador at the U.N. while the Myanmar diaspora across the world including Japan and the U.S. also took to the streets to show support for the ambassador.