Government troops prepare to launch an attack on a suspected hideout belonging to Islamic State fighters in the southern Philippines. (Photo by Ferdinandh Cabrera)

An estimated 16,000 people have fled their homes as a result of reported armed clashes between government troops and supporters of the so-called Islamic State group in the southern Philippine province of Maguindanao.

Military aircraft began pounding a suspected hideout of the Bangsamoro Islamic Freedom Fighters in the town of Shariff Saydona Mustapha on March 11.

"It was a demonstration of air power initially then after that, ground forces went in," he said.

This resulted in fighting that killed at least eight rebel fighters and one government soldier.

Relief missions have already begun to assist the families.

Noraida Abo, head of a local women’s group called Uniphyl-Women, said they were worried about residents not able to leave their homes after the military closed key roads.

Maj. Gen Sobejana advised residents in the area to stay in evacuation centers.

Local media quoted a purported rebel spokesman, Abu Amir, as saying that they were forced to fight after government troops entered their communities. 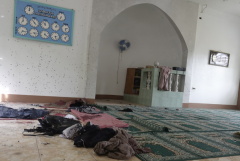 "We were not attacking them as we were just observing a 'wait and see' [approach] to the newly installed Bangsamoro region administration, but we have to fight back once attacked," Amir told local news outlet MindaNews.