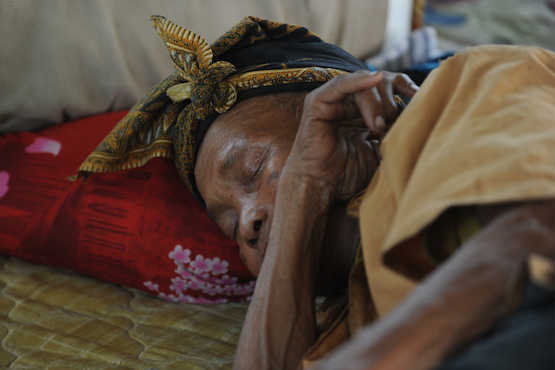 A man sleeps after being evacuated during the raised alert levels for the volcano on Mount Agung in Klungkung regency on the Indonesian resort island of Bali on Sept. 22. Hundreds of small tremors have stoked fears the volcano could erupt for the first time in more than 50 years. (Photo by Sonny Tumbelak/AFP)

More than 57,000 people, including Catholic families, have been evacuated from their homes in Bali after local authorities increased the alert status of the island's biggest volcano Mount Agung to the highest level.

The volcano is one of the most active in the region's Ring of Fire seismic zone and experts predict it will erupt in coming days, prompting the government to take precautions to prevent a repeat of its last eruption in 1963 which killed 1,600 people. Indonesia has about 120 active volcanoes.

At least 27 Catholics from eight families, out of more than 200 Catholics living in Karangasem district of the mainly Hindu island, have taken shelter St. Caecilia Mission Station's hall while others have chosen to stay with family and in government provided accommodation

There are about 41,000 Catholics out of a population of approximately 8.5 million in Bali.

The authorities, meanwhile, have placed a 12 kilometer exclusion zone around the volcano.

"Mount Agung is entering a critical phase," Sutopo Purwo Nugroho, spokesman for the National Disaster Mitigation Agency, said in a statement issued on Sept. 26 after the government raised the status of the 3,031-meter-high volcano on Sept. 22 following an increase in volcanic activity.

"Tremors are being becoming more frequent."

Still, there is no guarantee that the volcano will erupt, he said.

According to the national volcanology center more than 560 volcanic tremors were detected on Sept 25.

Tarsisia Ni Nyoman Juliarti told ucanews.com that she and her family fled their home in Padangkerta, in Karangasem district on Sept. 23 "because we fear an eruption."

"The volcano can be seen from where I live," said the 39-year-old mother of four.

Ignatius Budi, coordinator of church aid efforts, said his mission station along with Denpasar Diocese and the Holy Spirit Cathedral were distributing food and drink as well as masks, medicine, and bedding to the evacuees.

"We can meet their daily needs for the next few days," he said.

In the case of a disaster the church can provide logistics for 3-4 months.