Protesters hold candles during a demonstration against Myanmar's military coup at dawn in Dawei on April 28. (Photo: Dawei Watch/AFP)

Myanmar’s military has stepped up its offensive in Karen and Kachin ethnic areas with airstrikes and ground attacks that have displaced thousands of people.

On April 27, the military resumed airstrikes, dropping five bombs near Bwa Dear and Dagwin villages in Butho township of Papun district in Karen state, according to Free Burma Rangers, a Christian humanitarian group.

It said the latest offensive has increased the numbers of internally displaced persons (IDPs) from 24,000 to 25,000.

The group said there were three airstrikes between Dagwin and Ei Htu Hta IDP camps on April 28 morning and more than 100 IDPs at Ei Tu Hta camp crossed to Thailand, mostly pregnant women, elderly people, children and the sick.

Five bombs were also dropped in Karen state on April 27 but they all landed outside villages and there were no casualties.

The airstrikes came after an army base was captured by Karen guerrillas near the border with Thailand.

The state with a large Christian population has seen more than 60 years of conflict between the military and the Karen National Union (KNU) that has left over 100,000 refugees, mostly ethnic Karen, in camps along the Thai border.

In the Christian stronghold of Kachin state in northern Myanmar, fighting has been intensifying this week between the military and the Kachin Independence Army (KIA) as the military has used fighter jets and heavy machinery, according to local media reports.

Clashes have escalated since mid-March with at least 50 armed confrontations and both sides have used mortar shelling, according to a UN Office for the Coordination of Humanitarian Affairs report on April 27.

It said more than 5,000 people in Kachin state have been displaced due to renewed fighting and at least 4,000 remain in various sites including churches and monasteries. 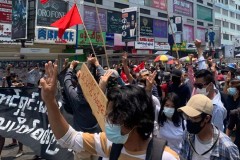 More than 100,000 people have taken refuge at IDP camps in Kachin and Shan states due to renewed conflict since June 2011 and they remain there with little prospect of going back to their homes.

Around 116,000 Catholics are among Kachin state’s population of 1.7 million, most of whom are Christians.

Kachin and Karen guerrillas who have supported anti-coup protests in the conflict-torn nation have engaged in intense conflict with the military since March.

The junta that led the coup on Feb. 1 has conducted a deadly crackdown against pro-democracy protesters in cities and towns.

At least 756 have been killed by the military and more than 3,440 are detained, according to a rights group that tracks casualties and arrests.

The UN rights chief has warned the repression by Myanmar’s military against protesters could be heading into “full-blown conflict” similar to Syria’s.