Burial, not cremation, to give impression that he continues to address devotees 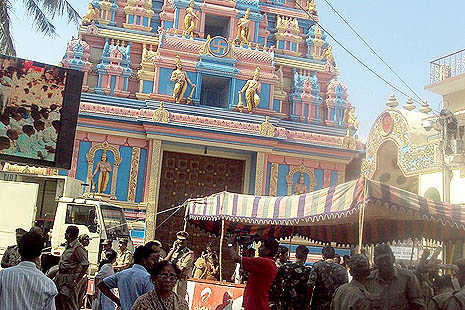 More than 600,000 people, including Christians, today attended the funeral of Sri Satya Sai Baba, a Hindu spiritual leader who died on Easter Day. He was buried with state honors at the same place in Puttaparthi, a village in the Anantapur district of Andhra Pradesh state, where he used to address devotees for many years. The last rites were conducted according to Hindu rites and caste rituals. R. J. Ratnakar, Baba's nephew and a trustee, sprinkled the holy water on the remains of the spiritual leader before burial. The ornate burial place, Kulwanth Hall, is located inside Prashanthi Nilayam (abode of divine peace), a temple built during 1948-50. Hindu temple towers surround the hall’s four parts. A giant statue of Baba in a sitting position has been kept in the hall to give the impression that he continues to address devotees, said a statement issued by the Satya Sai Central Trust that looks after the spiritual leader’s assets, worth billions of rupees. The same reason was given for preferring burial to cremation. The trustees have vowed to carry on the deceased leader’s legacy of welfare activities, the April 26 statement said. Hindu priests sprinkled waters from the Ganges and other sacred rivers in the hall before the burial. Kalavathi, a teacher, said she stood 10 hours in the queue yesterday to have glimpse of the spiritual leader. She expressed happiness that he is buried in the same place where she used to get his blessings. Father J. Sandanasamy, who heads the Jesuits working in Anantapur district, joined the crowd at Puttaparthi. According to him, the burial would give the devotees certain attachment to the place. The priest said the deceased Hindu leader’s motto, “Help ever and hurt never,” echoed Christian teaching. The administration has allowed people to give their last respects to the leader until April 29. Baba was born to Eswaramma and Peddavenkama Raju Ratnakaram in Puttaparthi on November 23, 1926. Many consider him a selfless philanthropist who helped millions of poor people in a backward region. Some dismiss him as a trickster who used magic tricks. Related reports Christians grieve at death of guruChristians pray for Hindu ‘godman’ IB14000