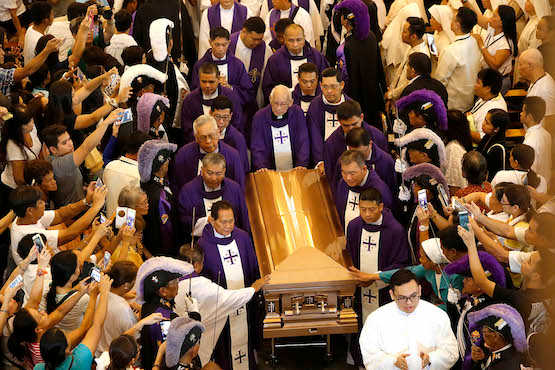 Thousands of Catholics in the Archdiocese of Cebu attend the funeral rites for Cardinal Ricardo Vidal on Oct. 26. (Photo by Charlie Saceda)

Thousands of Filipino Catholics attended the Mass and funeral rites on Oct. 26 for the late Cardinal Ricardo Vidal of Cebu who played a historic role in the country's 1986 peaceful revolution.

Authorities estimated the crowd who attended the Mass and joined the funeral procession at about 55,000. At least 800 police officers were deployed to ensure order during the ceremony, which was also attended by members of the clergy from across the country.

Cardinal Vidal, who played peacemaker during the bloodless People Power uprisings in 1986 and 2001 that resulted in changes in the country's leadership, died on Oct. 18 at the age of 86.

Auxiliary Bishop Dennis Villarojo of Cebu, former secretary to Cardinal Vidal, said the late prelate had a "gift for peacemaking," and always advised people, especially priests, not to allow prejudices to cloud their judgment.

"What we do not understand, we fear, what we fear, we considered our enemies. What you told us then is a formula for peace," said Bishop Villarojo. He said the late cardinal always reminded people that "those who disagree with us are not necessarily our enemies" but could be "our most vital collaborators."

The late bishop of Cebu always stood his ground and "remained neutral even to the point of being misunderstood," said Bishop Villarojo.

"The moral high ground you took, enabled you to broker a peace among worrying factions knowing that some of our quarrels are not really based on principles but on personalities," he said of Cardinal Vidal.

Bishop Ruperto Santos of Balanga said he would remember the late prelate as a "selfless and thoughtful shepherd" who was a "courageous prophet during the martial law years."

In a message read by a representative from the Vatican during the Mass, Pope Francis recognized Cardinal Vidal's "constant advocacy of dialogue and peace."

The country's three cardinals – Luis Antonio Tagle of Manila, retired Manila prelate Gaudencio Rosales, and Orlando Quevedo of Cotabato – attended the funeral rites with at least 24 other bishops and about 500 priests.

Cardinal Vidal's casket was placed on top of a century-old carriage, which was bedecked with flowers and candles, and covered with red velvet, during the funeral procession around the city. He was later buried in a mausoleum inside the Cebu cathedral compound. 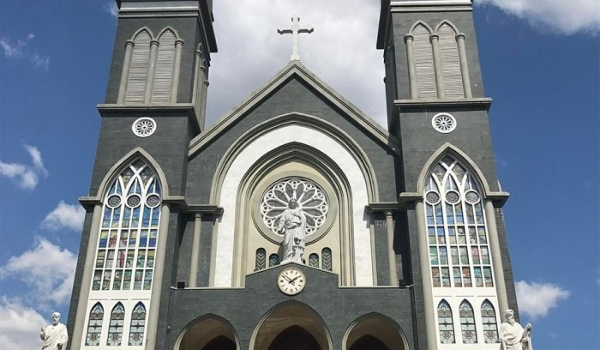