Firefighters work at the site of an explosion and fire at a plastics factory on the outskirts of Bangkok on July 5. (Photo: AFP)

Days after a massive fire destroyed a chemical factory, sending billowing black plumes of toxic smoke into the air far and wide, tens of thousands of people in a central Thai province remain affected by the disaster.

The blaze that started with a loud explosion in the early hours of July 5 engulfed a chemical factory complex in Samut Prakan province, near Bangkok’s Suvarnabhumi airport, where some 50 tons of chemicals had been stored in six warehouses.

The raging inferno was brought under control by the afternoon of July 6 after a day of heroic efforts by firefighters, one of whom died in the fire.

Some 40 people were injured in the blaze, which consumed the entire factory complex.

However, the toxic plumes of smoke have affected some 80,000 people living in the vicinity of the chemical plant, with many of their homes suffering various forms of damage.

Nearly 2,000 people living within a 5-kilometer radius of the burned-out factory have been forced to evacuate their homes and seek refuge at eight emergency shelters.

It remains uncertain when they will be allowed to return home as there are fears that the quality of air around the site remains unhealthy.

Among the chemicals stored at the facility was styrene monomer, a hazardous liquid chemical used to make disposable foam plates, cups and other products.

When burned, it can release toxic fumes, including styrene gas, a neurotoxin that can cause people to go numb minutes after inhaling the gas, which can also result in death if inhaled in larger amounts.

“People who breathe it in can get dizzy and vomit and [the gas] might cause cancer in the long term,” said Thalerngsak Petchsuwan, an official of the Pollution Control Department. 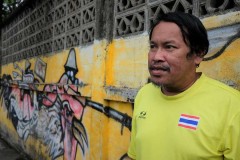 Last year a dozen people died and more than 1,000 others fell ill in the Indian city of Visakhapatnam after a leak of styrene gas from a chemical factory.

Thai experts remain concerned that much of the environs of the plant might have been badly contaminated with toxic chemicals, which may seep into water sources in the area.

The blast from an explosion in Samut Prakan that triggered the fire could be heard kilometers away.

“I heard a big bang. It sounded very close and I thought it was a huge lightning bolt,” Aree Thongboonrawd, a resident who lives nearby, told the Bangkok Post. “Then I heard sirens and thought a plane had crashed.”

“At first it felt like lightning,” said another resident, Baitong Nisarat. “After that, I heard something drop loudly, and for a while the house started shaking like there was an earthquake.”

Several locals said they had not known that dangerous chemicals had been stored at the factory right beside their houses or near them until after the explosion.

“I didn’t realize that it would be such a dangerous chemical that I have to evacuate,” said Jaruwan Chamsopa, a woman who lives about 3km from the site,  adding that the roof of her house had been damaged by the loud explosion and parts of the ceiling had fallen down.

“I am worried because the black smoke reached my house,” she added.

The massive fire near Bangkok came just as the ongoing third wave of a coronavirus outbreak has been taking a turn for worse in the capital with around 6,000 new infections and 50 deaths a day.

Officials have warned that unless the outbreak of Covid-19 is brought under control soon, the country might face a catastrophe as infections and deaths could spiral out of control.