Protestors of all religions stand united against Hindu extremists Hundreds of civil society members gathered at New Delhi's Jantar Mantar, June 28, to protest against the recent incidents of mob lynching across the country. (ucanews.com photo)

Thousands of people, including church groups, gathered across India to protest against mounting religious intolerance and express solidarity with the victims of violence.

Secular groups across India organized the June 28 protest titled "Not in My Name" to bring together thousands of Indians who are against violence conducted in the name of Hinduism and patriotism.

"A small group in India believe that every Indian should follow a particular culture and lifestyle dictated by them" which they project as Indian culture, Michael Williams, president of the United Christian Forum, told ucanews.com.

"It cannot exist. Not in my name and not in my constitution. Do not fight this war in the name of India and Indians. You are not protecting the constitution of India by killing innocents," he said explaining the message of the protest.

Holding placards and the national flag, students, artists, politicians and religious leaders gathered in New Delhi to take part in a silent protest. Facing the protesters was a billboard — called the Lynch Map of India — illustrating where incidents of mob lynching happened in the country since 2015.

The protest took place six days after a 17-year-old Muslim was killed by a mob on a train during a dispute over seat sharing June 23. The youth and his three brothers were traveling back to their village from New Delhi after a shopping trip for the festival of Eid.

According to a police report, the four brothers received religious abuse, were called meat eaters and attacked. They were thrown off the train some 20 kilometers from the national capital.

Shergill said all Indians should "challenge and stand against these atrocities." 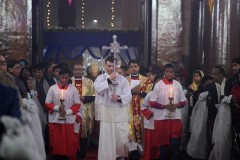 Since 2015, many people across the country have fallen victim to incidents of mob lynching related to religious intolerance, that commonly results over petty issues.

On April 4, a Muslim man was beaten to death by a mob in Alwar district in the northern Indian state of Rajasthan on suspicion of smuggling cows. Since May 2015, at least 12 people have been killed due to differences over the cow that orthodox Hindus regard as a holy animal.

Four men were lynched by a mob of 20 youths May 18 in Jharkhand state in response to rumors that the group was involved in child trafficking. Several incidents of mob violence against Muslims and Christians were also reported in 2015 and 2016.

Secular leaders say Hindu extremist groups that are working to create a Hindu-only nation have become emboldened since the pro-Hindu Bharatiya Janata Party came to power in 2014 with a landslide majority. Many Hindu groups have interpreted this political success as a mandate to advance their cause.

Mohammed Aamir, a Delhi-based Muslim student, told ucaenws.com that "unrest is growing in the country and protests like these should take place more where everyone from every nook and corner of the country gathers to deliver a message that we are united."

Similar protests were held in the cities of Mumbai, Kolkata, Hyderabad, Bangalore, Thiruvananthapuram, Kochi, Patna and Lucknow. More protests are scheduled to be held in other parts of the country in the coming days.