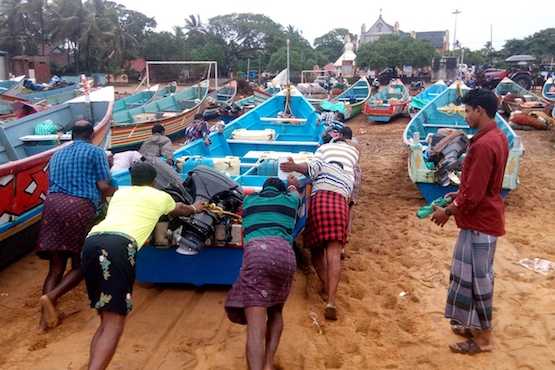 Fishermen move a boat to a safer place in Valiathura in southern Kerala in the wake of cyclone Ockhi which hit the coasts of Kerala and Tamil Nadu states Dec. 1-2. (photo courtesy IANS)

A cyclone on the southern Indian coast over the weekend claimed the lives of at least 32 poor Catholic fishermen who were at sea and 200 more were missing.

Thousands of other coastal residents had shifted into relief camps.

Gusty winds and heavy rains began to lash the coast near the southern tip of India on Thursday after a depression near Sri Lanka developed into a cyclone.

The confirmed deaths were in Kerala and Tamil Nadu states, according to government sources.

All the dead are Catholic men who had gone out to sea, said Father V. Wilfred, priest of Vizhinjam parish, a fishing village near Kerala's capital, Thiruvananthapuram.

The cyclone was unexpected as fishermen were still on the sea, Father Wilfred explained.

Antony Silvaster, a Catholic fisherman in the fishing village of Vizhinjam, said there was no warning.

He added that the fact that 200 fishermen are still missing suggested the death toll would rise.

Worst affected was the coastal area near India's southern tip, a Catholic stronghold which comes under the Latin rite.

The Kerala state government had opened a total of 29 relief camps to house some 3,000 people of some 500 families.

The government should provide adequate compensation to help them begin life anew, he said.

The priest added that it was rare for cyclones to hit India's west coast, unlike the cyclone-prone eastern Indian coast.

The last major cyclone on Kerala's coast was in 1941, which killed 62 people and destroyed some 50,000 homes, local media reported.