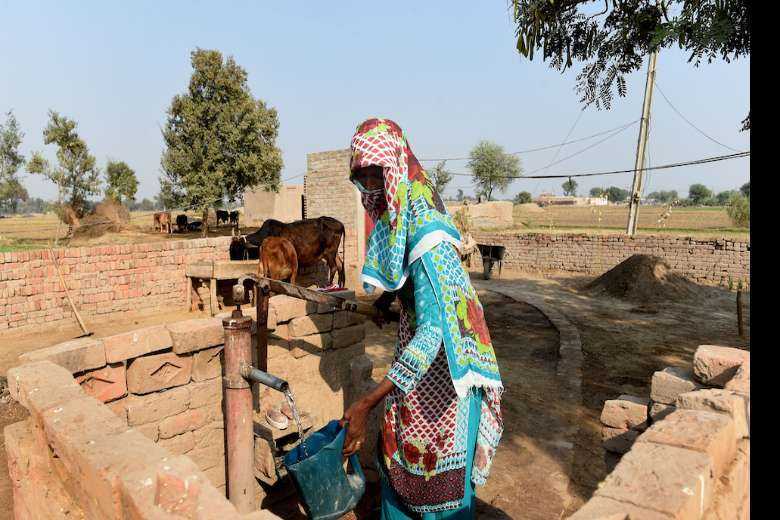 A Pakistani woman pumps water from a hand pump next to a toilet in Basti Ameerwala village in central Punjab province. Religious fundamentalism is worsening the country's water shortage. (Photo: AFP)

Aalim Ram and his family were attacked for drinking water from a tap outside a mosque in his village in Pakistan’s Punjab province.

“I was stopped from filling my bottle and warned against passing near the mosque. Despite the abuse, I agreed to their demand but argued that the state-owned road is free for everyone. They started beating me and my family including the female members. We are poor people; we can’t do much,” said the Hindu laborer.

In a first information report registered at the local police station on Sept. 11, Ram accused 10 Muslims of slapping and punching his family as well as 15 females who were picking cotton in Kahor Khan village in Rahim Yar Khan district. The Muslim-majority village is home to about 500 Hindus.

“Give us the right to drink water” and “Stop hooliganism,” chanted more than 50 Hindus in a Sept. 14 protest at the bridge of a canal.

Peter John, a Christian member of the district peace committee, led the demonstration.

“We protested late because the Hindu family were silenced by force. They were threatened to leave the country. The culprits are still at large. There has been no action. The police are reluctant as Ghuffar has political influence. We demand justice from the government,” he told UCA News.

“The local Muslims set up several sabeels [refreshment stalls] for Muharram mourners last month. They never questioned the faith of whoever stood in line for a glass of squash. Poor families from surrounding villages use the mosque tap because their tap water is unpleasant.

“A ban on Hindus will make them travel about three kilometers to collect water. The poor cannot afford to buy mineral water.”

Mosques and their ablution points are a common source of water for both local people and travelers. Clerics allow travelers to wash their faces and hands at mosque taps after removing their shoes. They are also allowed to sleep inside mosques even during prayer times. Pakistan has about 300,000 mosques.

“Amid increasing inflation, religious minorities are continually challenged by the extremist mindset. We are witnessing a peak of bigotry. Sometimes we feel our country is not for followers of other religions. They will be either welcomed or forcefully converted,” he told UCA News.

Pakistan's per capita annual water availability has slumped to 1,017 cubic meters from 1,500 in 2009, according to the International Monetary Fund. The Pakistan Council of Research in Water Resources has warned that Pakistan will approach absolute water scarcity by 2025. Researchers blame a rising population, rapid urbanization and climate change for the water shortage.

On Sept. 9, Pakistan’s oldest religio-political party, Jamaat-i-Islami, staged a sit-in outside the offices of the Karachi Water and Sewerage Board in protest at the problem of water shortages in the sea port with a population of 30 million.

“The concept of receiving water through pipes is vanishing and everyone is getting this basic necessity through tankers. Water for residential areas is also being diverted to industrial areas. We remain thirsty,” said Hafiz Naeemur Rahman, Jamaat-i-Islami’s Karachi chief.

In April, Caritas Pakistan Karachi under its "WASH Initiatives in Remote Areas of Pakistan" project restored the water supply of Ahsan Raza Goth village in Gadap of Malir district in Karachi.

The village faced a perennial shortage of water for drinking and cooking as well as for agricultural purposes after the breakdown of a submersible solar pump — the only source of water for the entire community.

However, religious fundamentalism adds to the challenge. Some Muslims consider Christians dirty and do not drink water using the same container. Asia BIbi spent eight years on death row after being convicted of blasphemy in 2010 following an argument with her fellow farmhands over sharing water.

Last year Christian farm laborer Saleem Masih was tortured for two hours for washing himself in a tube well owned by a Muslim farmer. According to a medical report, he died from total organ failure.

In 2017, ninth grader Sheron Masih was beaten to death by his classmates because he drank water from a cup meant for Muslim students at a government-run school in Punjab province.