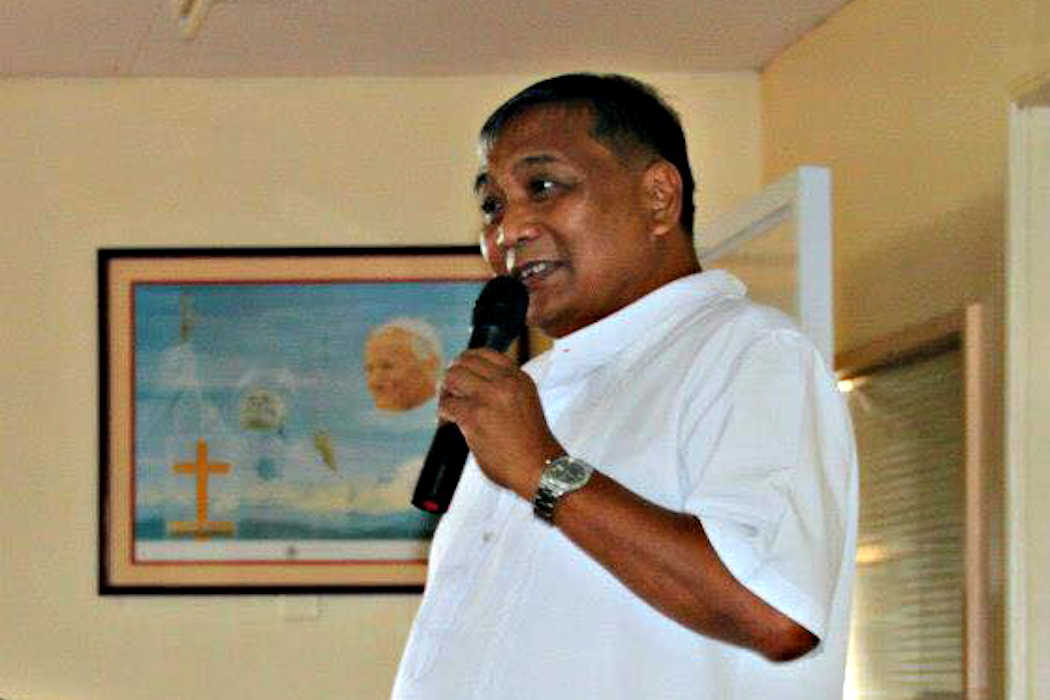 Father Rey Urmeneta, 64, a priest at St. Michael the Archangel parish in Calamba City, 60 kilometers south of Manila, was on his way to a church meeting when he was shot by two unidentified gunmen on June 6. (Photo by R.A. Maico)

A Catholic priest who used to serve as chaplain of the Philippine National Police was wounded after a gun attack in Calamba City, about 60 kilometers from Manila, on June 6.

Father Rey Urmeneta, 64, a priest at St. Michael the Archangel parish in the city, was on his way to a church meeting when two gunmen shot him.

A police report obtained by ucanews.com said the priest was in his car with secretary Remedios de Belen when the shooting occurred about 9.40 a.m.

Father Urmeneta suffered wounds to his left upper back and left arm. He was rushed to hospital where he was reported to be in stable condition.

An investigation was ongoing to determine the motive for the attack, although the priest has already told police that the incident might have something to do with people who owed him money.

In April, Father Mark Ventura from Gattaran town in the northern Philippines died after being shot by a lone gunman shortly after celebrating Sunday Mass.

On Dec. 4, 2017, Father Marcelito Paez was also shot and killed in the town of Jaen, Nueva Ecija province.

Faith-based social development network Philippine Misereor Partnership Inc. (PMPI) has expressed "lament" over the death of the priests who were known to be human rights defenders.

Yoly Esguerra, coordinator of PMPI, described the killing of Father Ventura as "senseless."

"To kill a priest who has chosen to live a life with simple people in distant and forgotten places to make up for the lack of government presence in the area is preposterous," said Esguerra in a statement.

Father Paez, meanwhile, was shot after visiting a jail to help free a political prisoner.

Human rights groups said the killings of the priests and the attacks on human rights defenders in the country have become "a source of our deep concern."

"We can't help but ask, is this the way to silence critical voices of a sector that can potentially challenge and oppose the rules and policies of those in power?" read a PMPI statement released in May.

The group said the church, "despite many internal odds and challenges," has been a "consistent moral compass" for past leaders and governments.

According to Global Witness, a London-based non-government group, the Philippines was the second deadliest country for activists in 2017.