Officials promise to relocate destroyed church after protest by 70 Catholics 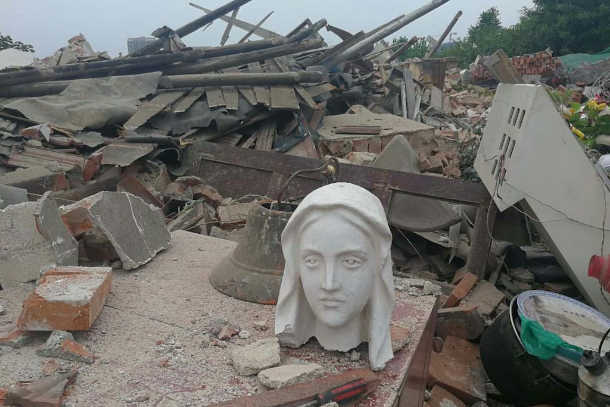 The head of a Marian statue stands among the ruins of Qianwang Catholic Church after it was demolished on Aug. 13. (Photo supplied)

Qianwang Catholic Church in China's Shandong province has become the third church in Jinan Diocese to be demolished by local authorities this year.

Liangwang Catholic Church was bulldozed on July 17 following the demolition of Shilihe Catholic Church, but a Catholic source told ucanews.com that the latter church would be rebuilt in another place.

More than 170 officials demolished Qianwang Church in Huashan town of Jinan city's Licheng district on Aug. 13, according to a source.

He said authorities "had no explanation or solution and then forcibly demolished it." A Marian statue and a statue of Jesus were destroyed, while the church's alms box disappeared.

The source accused officials of ignoring the law, regulations on religious beliefs and the basic demands of the faithful. Such a barbaric demolition of the church had seriously hurt the trust of the faithful in the local authority, he said.

On the day after the demolition, more than 70 Catholics including two priests and a nun braved heavy rain to launch a protest in front of the local government's offices.

They held banners asking for the return of the church and "the home of our soul" and requesting a reasonable explanation for the demolition.

The source said parish priests were later called to meet Licheng officials, who promised to relocate the Liangwang and Qianwang churches. "It may take a long time but they emphasized it will be arranged," he added.

Qianwang Church was built in 1750 and reconstructed by the cathedral of Jinan Diocese in 1938 after a flood had destroyed it.