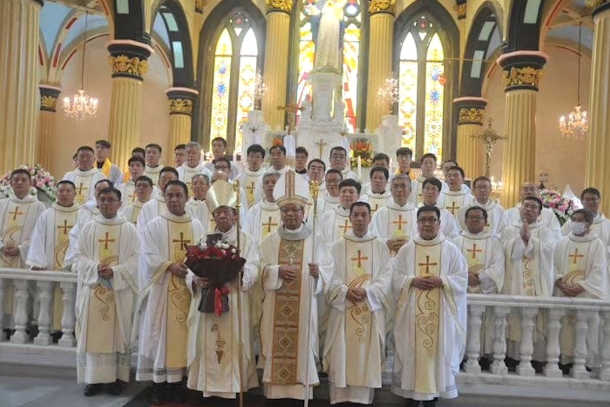 An image released by Fujian province’s Ethnic and Religious Affairs Department after the installation of Bishop Peter Lin Jiashan, the third underground bishop recognized since 2018.

An 83-year-old Chinese underground bishop was installed at a state-sanctioned church ceremony on June 9, just three months before the expiry of a Vatican-China pact on the appointment of bishops in the communist country.

Bishop Peter Lin Jiashan, the underground bishop of Fuzhou in Fujian province, was installed at Fanchuanpu Holy Rosary Church in Fuzhou. Bishop Lin had been leading the underground church loyal to the Vatican since 1997. The ceremony was attended by only 40 priests and 80 Catholics from Fuzhou Diocese, reportedly following restrictions against gathering because of the coronavirus pandemic.

Bishop Lin is the third bishop to be recognized by the communist regime after Vatican and China signed an agreement in September 2018 on the appointment of bishops. The details of the pact are still under wraps and it is reported to be valid only for two years unless renewed before September 2020. Bishop Joseph Cai Bingrui of Xiamen in Fujian province, a Vatican-recognized bishop, presided the ceremony. Since 1951, when the Vatican and China ended diplomatic relations, the communist government in China has not accepted any of the bishops appointed by the Vatican. In 1957, the state established the Chinese Catholic Patriotic Association (CCPA) and appointed its own bishops. The state-run church came to be known as the open church, while the Vatican loyalists were called the underground church. Decades of Vatican efforts to regularize relations and appoint bishops in China resulted in the Vatican-China agreement in 2018. The first underground bishop to be recognized by China following the agreement was Bishop Zhuang Jianjian of Shantou on Jan. 22, 2019. He retired immediately. The second was Bishop Jin Lugang of Nanyang on Jan. 30, 2019. Fujian province’s Ethnic and Religious Affairs Department said Bishop Cai delivered a congratulatory speech on behalf of the CCPA and the Chinese Catholic educational administration committee of the province after the ceremony for Bishop Lin. Father Wang Yuliang, an official of the state-approved bishops’ conference in China, read a letter of approval from the bishops’ conference. Bishop Lin, 83, pledged to obey God, fulfill the pastoral duties of a bishop and proclaim the Gospel to lead Fuzhou Diocese. He also vowed to be an active member of the Chinese Catholic Church. The bishop’s statement also said priests and Catholics should abide by the constitution of the country, uphold national unity and social harmony and love the country and the Church. The statement also insisted on following the directions to “sinicize the Church in our country” and contribute to the realization of the “dream of a great rejuvenation of the Chinese nation.” A Fuzhou priest who requested anonymity told UCA News that the diocese has more than 100 priests but only some 40 could attend the ceremony because the Covid-19 pandemic is “not yet over in the area." "The number of people who could attend the ceremony was limited,” he said, adding that attendees were selected after discussion among priests. However, some sources told UCA News that the entire diocese had not accepted Bishop Lin’s public installation, including both open and underground groups. The local Church was divided into at least three factions — the open and underground groups and a third group looking for their unification. “The road to unity and communion with the Vatican is still far and not that easy," the source said. At least one third of diocesan priests have not signed the government document for civil registration of the clergy “because they were worried about the diocese's future,” another local source told UCA News.