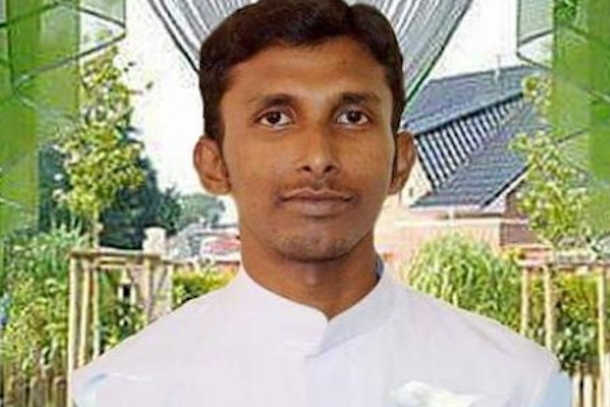 Father Xavier Alwin, 31, was found hanging from a ceiling fan in his room on July 1. (Photo supplied)

In the third such incident in India in 10 days, a Catholic priest was found hanging from the ceiling fan of his residence in Tuticorin Diocese in southern India's Tamil Nadu state.

Father Xavier Alwin, 36, was found in his room within the premises of a diocesan-run school in Thoothukudi district on July 1. He was a teacher in the school. Bishop Stephen Antony Pillai of Tuticorin said police recovered a suicide note saying the priest was "frustrated." The bishop said he was unaware of the cause of "frustration that led him to take the extreme step." Tuticorin is the anglicized name for Thoothukudi."The police are investigating the case. We will know the reasons after that," he told UCA News.When Father Alwin failed to show up for breakfast, the bishop said, others in the house were not concerned. But when he was not seen outside even after 11am, one of the priests knocked on his door."When there was no response, he used a spare key to open the door and found Father Alwin hanging from the ceiling fan," Bishop Pillai said on July 2. He said police recovered the suicide note and seized the priest's cellphone. They have also sealed off the room."It is unfortunate. The priest was very active, kind-hearted and mingled with everyone. People loved him so much," the prelate said."It is unbelievable that he took such a step. People who know him wonder what has happened to him." The funeral of Father Alwin, after a post mortem, is scheduled for his native parish in Amalinagar on July 2.On June 20, the body of 50-year-old Father Yeruva Bala Shoury Reddy was found hanging from the ceiling fan of his bedroom in Kolakalur parish in Guntur Diocese of Andhra Pradesh state.Before hanging himself, the priest had tried to kill himself by stabbing himself in his stomach. A suicide note said he was depressed and took the extreme step.On June 22, the body of another priest, 51-year-old Father George Ettupara, was fished out of a well near his parish in Punnathura village in Kerala state. He is also suspected of committing suicide following depression.A 21-year-old student nun's body was found in the well of her convent on May 7. The nun belonged to the convent of the Basilian congregation in Kerala's Pathanamthitta district.Last year on Oct. 11, Father Mahesh D'Souza, 36, of Udupi Diocese in Karnataka state, was found hanging from a ceiling fan in his room. He was a parish priest and principal of a diocese-run school.