The Twenty-Six Martyrs of Japan were executed by crucifixion in 1597 in Nagasaki.

That is true whether we modern believers are Japanese or not, Catholic Christians or not. The Church within which we live and worship endured persecution so recent that I know a woman whose grandfather died a martyr. The rest of her family — parents, siblings, aunts, uncles, cousins, nieces and nephews — was wiped out on Aug. 9, 1945, when the atomic bomb exploded over the Catholic neighborhood of Nagasaki. She was the only member of the family out of town that day.

During the centuries of persecution, Christians in Japan had no church buildings, no clergy, no religious, no Masses, no religious institutions, no diocesan structures, and no contact with the rest of the Church in the country or outside.

What they did have was each other and a commitment to maintain as well as they could the faith that was passed on to them and to pass it on to the next generations even at the risk of their lives. They were poor, oppressed and lived in perpetual danger, but they prayed and shared their ability to help one another in need. In many ways, it was the Golden Age of Christianity in Japan.

The coronavirus pandemic is an opportunity to learn or relearn that today. We have had to be faithful without much of what we thought essential, symbolized by a building and what goes on inside it. But God is still with us whether we are in a cross-decorated building or not. The real issue is, are we with God?

Around the world, there are Christians who clamor to have their buildings reopen so that they might exercise their Christianity. They ignore the fact that confronted with a highly contagious disease, the most Christian thing to do is to protect others by following the advice of disease experts.

Jesus never told his followers to gather in a particular place each week. He did say that our lives will be judged on whether or not we respond to him in our needy sisters and brothers. He did say that when we pray, we should go apart to a private place and pray in secret to the Father who sees what happens in secret.

When he spoke with the Samaritan woman at the well, Jesus said that places are not important, that what matters is worship “in spirit and truth.” The woman had asked him where proper worship should be done, at the temple on Mt. Gerizim or at the temple in Jerusalem. His answer was basically, “Neither.”

In that case, do we need buildings at all if we can and should pray anywhere and everywhere? We do not and we do. 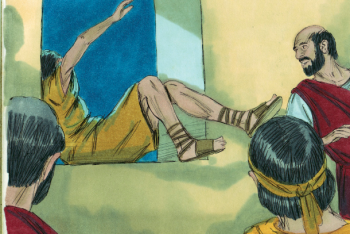 Originally, Christians gathered in homes. Besides being persecuted, Christian communities were small enough to not need special buildings and were too poor to erect them. Eventually, as numbers increased, homes were modified to allow larger gatherings. The remains of the oldest known one are in Dura-Europos in Syria. Its frescos, the earliest surviving Christian art, are in a museum at Yale University in the United States.

Over time as Christian communities grew, buildings were adapted or erected for liturgical use. The three-aisle layout that is so common in churches comes from basilicas (public halls) that were repurposed into churches or were the architectural model for them.

So, we have buildings in which we gather in the name of Jesus so that our discipleship can be confirmed, nurtured, confronted, affirmed and comforted.

Buildings, Sunday gatherings, public prayers and hymns are the accompaniments of religion, but not the essence of Christianity. Christianity is not a religion. It has religious trimmings, but its most basic reality is a relationship with God through Jesus Christ. The “religious” trappings aid our commitment to and celebration of that relationship but are not the relationship.

Now that the danger of contagion makes the buildings and large gatherings unavailable, we are invited to concentrate on what our faith really is. It is prayer, service and trust that we celebrate with others when we can, but which we must live regardless of circumstances.

We can gather few by few to break open the Word, break the Bread, and share our faith. We can be church, as were the persecuted Christians of Japan.