The words 'God' and 'Bible' banned in Chinese textbooks 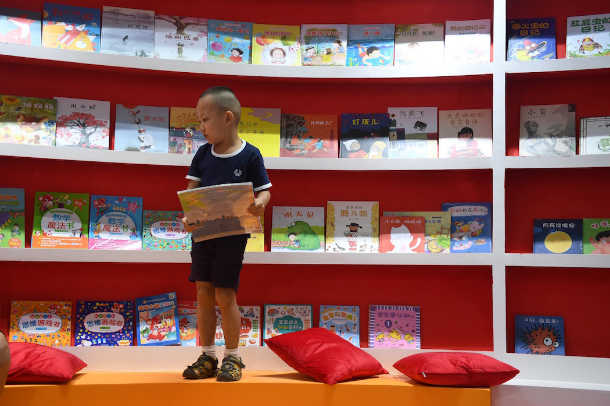 A file image of a boy holding a book at the 2017 Beijing International Book Fair. The Chinese government has censored the words "Bible," "God" and "Christ" from classic children’s stories. (Photo by Greg Baker/AFP)

Foreign textbooks translated into Mandarin for sixth-grade students have expunged religious references, according to media reports. The removal of any mention of “God” and “Bible” have especially horrified Christians in the country.

The concern for the impact on children’s beliefs and thoughts follows news that four classic stories published by the People’s Education Press have had words offensive to the authorities changed or deleted. They include “The Little Match Girl” by Hans Christian Andersen, “Robinson Crusoe” by Daniel Defoe and “Vanka” by Anton Chekhov.

Peter Gao, a Catholic who was concerned enough to speak publicly, told ucanews.com that previously, when Chinese authorities demolished churches and crosses, and banned minors from entering churches, they “hypocritically used the so-called law to suppress the Church. Now they simply remove religious vocabulary from world literature masterpieces.”

Gao went further, claiming that the latest move represented a persecution by the authorities against the freedom of religious belief.

“No matter which law or regulation it refers to, I am afraid that its shamefulness cannot be justified,” Gao added.

The Ministry of Education says its inclusion of foreign literary masterpieces in schools’ curricula is aimed at facilitating students’ understanding of other countries’ culture.

However, whereas “The Little Match Girl” originally reads “When a star falls, a soul ascends to God,” it has been changed to “When a star falls, this person leaves this world.” In “Robinson Crusoe,” the three Bibles in the shipwreck are changed into “several books” while in Vanka, the word “Christ” is deleted entirely.

The decision of the Chinese Communist Party (CCP) to change the original text has not only angered Christians but also caused discontent in the education sector.

Kelly, an elementary school teacher, told ucanews.com that she was very surprised at the revisions and had never heard of a country revising the world’s classics.

“If I’m the one teaching this lesson, I really don’t know what to tell the children,” she said. “If in the future they come to know that what I’m teaching today is different from the original, how will I face their questions?”

She also suggested that such a move would strangle children’s quest for knowledge and understanding. “I really don’t know what kinds of textbooks children will encounter in the future and how they will be educated. It’s too horrible,” she added.

Censorship ‘is not persecution’

But another, Christian teacher called Paul was not shocked by the development. “I’m no longer surprised at any improper behavior by the CCP,” he said.

“The CCP was well known for lying when the country was newly founded. Its promise to give people human rights, freedom, equality, the rule of law, etc. at that time has not been realized so far, nor even has the constitution been implemented. The revision of textbooks is relatively slight compared with the previous behavior of the CCP.”

Continuing to play down the significance of the latest censorship, Paul said that revising literary masterpieces fell far short of the persecution and suppression of Christians and dissidents during the Land Reform and Cultural Revolution. “We can also see through the [Tiananmen Square Massacre] tragedy of 1989 that the CCP is completely cruel and absurd.”

A Chinese scholar of Christianity, who asked not to be named, expressed his shock at the textbook revisions, calling them the CCP’s “biggest ignorance”, saying they seriously infringed upon the rights of the authors and made the rest of the world worry about such interference by the Chinese government.

“Today the CCP revises the world’s classics; no one knows what else will be revised tomorrow,” he told ucanews.com.

The scholar said that religious suppression by the CCP and its attempt at cleaning through the elimination of Christian words from classic literature has breached a fundamental freedom of religious belief. “If even Christian words are not allowed in literature, I fear there is going to be another rise of Christian literary inquisition in China.”