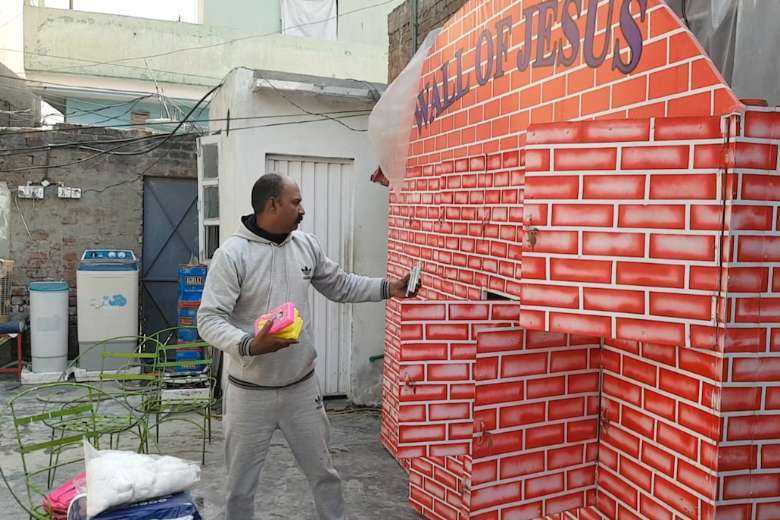 Once a week, the locals of the Youhanabad neighborhood in Lahore head to the Wall of Jesus to collect food, warm clothes and other items.

These include 35-year-old Mumtaz Bibi, who lives in a street near St. John's Catholic Church.

“My husband earns up to 1,000 rupees (US$6) a day for whitewashing buildings. Increasing inflation has made it difficult to eat fresh meals,” she told UCA News.

The mother of three took a dress from one of the 16 drawers of the 3-meter-tall wall with a white cross atop. The drawers are filled with items including bridal dresses, warm clothes, school uniforms, shoes, groceries, diapers and school bags.

“I plan to wear the new dress for the next Sunday Mass. Word on the street helped me to locate the Wall of Jesus. I will drop the books of my children at the wall after the annual exams. I hope they help others,” she said.

Catholic philanthropist Raja Walter initiated the project last December at his house in Youhanabad. The low-income area of Lahore is home to more than 50 registered churches and about 150,000 Christians including more than 7,000 Catholics.

“Door-to-door visits were conducted for three months to collect leftover items. The wall serves as a direct connection between the donor and the needy beneficiary. Someone’s waste can serve the need of another,” said Walter.

The burger shop owner has been running a food point offering free evening meals to daily wagers and widows since last March when Pakistan’s government imposed a national lockdown to contain coronavirus cases.

“The wall was erected in my premises to protect the dignity of the beneficiaries. Most of them are selected from the queues at the food point. Thirty percent of them are Muslims. Some even asked for prayer caps and burqas,” Walter said.

“The purpose was to make it a common point for blood donation as well as a resource center for those seeking jobs. Educated Christians are being convinced to submit their CVs while a database of office workers is being developed.”

According to the Pakistan Partnership Initiative (PPI), a Christian organization based in Islamabad, 70 percent of Christians, particularly daily wagers and laborers, lost their jobs or reported reduced income during Pakistan’s nationwide lockdown last year.

In 2009, the national government reserved a 5 percent job quota for minorities. However, human rights organizations claimed that most people from religious minorities were doing menial jobs.

Meanwhile, weekly inflation has reached a nine-week high of 9.17 percent year on year as prices of essential items witnessed a double-digit hike, according to the Pakistan Bureau of Statistics.

The walls of kindness

According to Father Francis Gulzar, parish priest of St. John's Catholic Church in Youhanabad, the idea of the Wall of Jesus was inspired by Deewar-e-Mehrubani (the wall of kindness), a charitable phenomenon introduced by an anonymous Iranian in 2015.

"If you don't need it, leave it. If you need it, take it,” stated the inscription next to some hooks and hangers on a wall in Iran’s northeastern city of Mashhad. The idea quickly spread on social media.

In Pakistan, the first wall of kindness was started by two female teachers in the southern port city of Karachi in 2016. Similar walls were set up in other cities but few survived.

Last year baskets of kindness sprouted on tandoors (clay ovens) in various parts of Peshawar, capital of the northern province of Khyber Pakhtunkhwa.

“The Wall of Jesus is another good initiative by a lay Catholic of Youhanabad. The poor are especially benefiting from the project. It can improve interfaith harmony in our area with a sad history,” said Father Gulzar.

The vicar general of Lahore Archdiocese was referring to a suicide bombing he witnessed at two churches in Youhanabad in 2015 that killed 15 Christians and left more than 70 injured during Sunday Mass.

“A media campaign backed by provincial governments can help in creating awareness among the public and revive the lost walls,” said Father Gulzar.

The World Giving Index ranked Pakistan as the 69th most generous country out of 126 nations between 2009 and 2018.

However, human rights groups say religious minorities were given state food supplies during the Covid-19 lockdown in the Islamic republic where 60 percent of Christians live below the poverty line.