The Vatican: Inalienable human rights must be defended 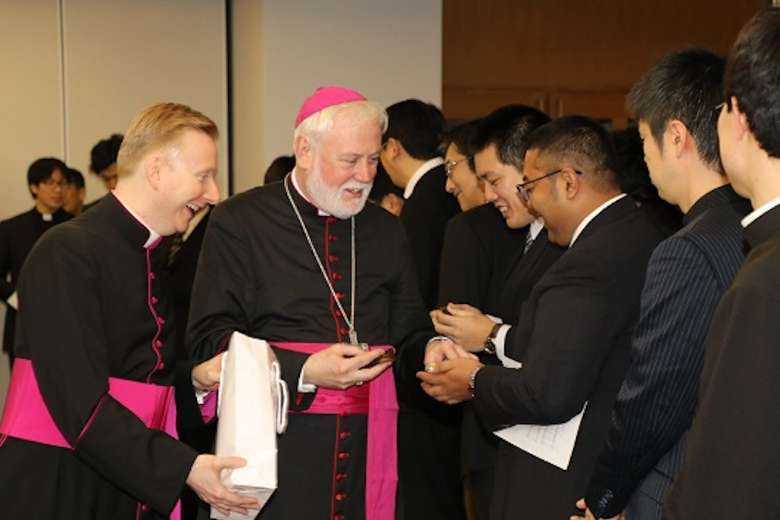 Archbishop Paul Gallagher, the Vatican’s secretary for relations with states, delivered a strong message on human rights to the 46th session of the UN Human Rights Council being held virtually in Geneva.

He called on the United Nations to “rediscover the foundation of human rights in order to implement them in an authentic fashion.”

In the context of Covid-19, he said, the commitment to the protection and promotion of universal human rights faces new challenges while asserting its relevance.

“As a global community, we need to rediscover the foundation of human rights in order to evaluate how to implement them in an authentic fashion to the current context,” Archbishop Gallagher said.

He reflected on human dignity as the foundation of human rights, the risk of their deterioration and the authentic promotion of fundamental human rights in light of the pandemic.

“The Preamble to the Universal Declaration of Human Rights (UDHR) unequivocally declares that ‘the recognition of the inherent dignity of all the members of the human family, and of their equal and inalienable rights, constitutes the foundation of freedom, justice, and peace.’ It was this same conviction that brought the family of nations to proclaim boldly in the UN Charter its ‘faith in fundamental human rights, in the dignity and worth of the human person, in the equal rights of men and women and of nations large and small,’” Archbishop Gallagher said.

“These two documents, which serve as the cornerstone for the UN system and for the human rights mechanisms therein, recognize an objective truth, one that is independent of the need for consensus and is not conditioned by time, place, culture or context, namely, that every human person is innately and universally endowed with equal dignity, which is the basis for authentic human interaction. The vast system of UN mechanisms for promoting and protecting human rights stems from this fundamental conviction. They represent a concrete method by which the global community strives to uphold these essential ideals.

“Unfortunately, this solemn commitment is easier to pronounce than to achieve in practice. The UDHR affirms that the ‘recognition of the inherent dignity and of the equal and inalienable rights of all members of the human family is the foundation of freedom, justice, and peace in the world.’ Therefore, when we witness a world that is fractured by divisions, suffering from injustice and the scourge of war, we must admit that the above-mentioned auspicious objectives are still far from being ‘recognized, respected, protected and promoted in every situation’ despite the good will and efforts of the UN system.”

Archbishop Gallagher said the true promotion of fundamental human rights depends on the sincere commitment not just of states but of each individual on the basis of their freedom of conscience and with the awareness of their own moral responsibility.

Nonetheless, even on an institutional and multilateral level, there are risks that threaten the authentic promotion and protection of human rights. Indeed, human rights may be considered as a moral imperative only insofar as they truly promote the underlying foundation from which they derive. Any practice or system that would treat rights in an abstract fashion, separated from pre-existing and universal values, risks undermining their raison d’être, he added.

Challenging prevailing ideologies, he pointed out: “In such a context of rights devoid of values, the same human rights institutions that were created to promote human dignity become susceptible to prevailing visions or ideologies, and may impose obligations or penalties that were never envisioned by the state parties thereto, which may actually, in some cases, contradict the values they were supposed to promote. They may even presume to create so-called new rights that lack an objective foundation, thus, drifting away from their fundamental purpose of serving humanity and human dignity.”

He criticized the Human Rights Council's General Comment Number 36 Article 6, published in October 2018, on the right to life, which, he said, twists the meaning of the right to life to imply the right to assisted suicide and the right to end the lives of unborn children. Since life “before being a right, is first and foremost a value, a good to be cherished and protected,” such created new rights end up “undermining the values that they were intended to uphold.”

Noting that the right to freedom of thought, conscience and religion is the “most fundamental right,” Archbishop Gallagher expressed concern that the "global response to the Covid-19 pandemic reveals that this robust understanding of religious freedom is being eroded.” He lamented that many Covid-19 restrictions apply stricter limitations to places of worship than for other activities, dismissing the religious dimension of the human person as non-essential.

“Amid the current Covid-19 pandemic, many issues of human rights have taken on even greater relevance. While acknowledging the value and the necessity of certain measures imposed by local, national and regional authorities to ensure public health, my delegation would like to note how some such measures also impinge on the free exercise of numerous human rights,” he said.

“A number of persons finding themselves in situations of vulnerability — such as the elderly, migrants, refugees, indigenous people, internally displaced persons and children — have been disproportionately affected by the current crisis. Any limitations on the exercise of human rights for the protection of public health must stem from a situation of strict necessity. Such limitations must be proportional to the situation, applied in a non-discriminatory fashion and used only when no other means are available.”

The Holy See, he said, would like to reiterate the urgency of protecting the right to freedom of thought, conscience and religion. As the most fundamental right, its protection, promotion and realization are of the highest priority.

In particular, religious belief lies at the core of human fulfilment and expression, as it touches directly the innermost dimension of the dignity of the human person, in his or her conscience. True religious freedom requires that political authorities engage with religious leaders, with faith-based organizations and those of civil society, which are committed to promoting freedom of religion and conscience, he added.

“While the Covid-19 pandemic has indeed revealed the fragility of our shared human nature, it has also demonstrated our profound interdependence. While this is clear from the global effects of Covid-19, it also applies to our approach to human rights and to multilateralism as a whole,” Archbishop Gallagher said.

“In order to combat effectively the consequences of the various crises, we must be willing to move beyond that which divides us. For this reason, the invitation of Pope Francis, expressed in his most recent encyclical Fratelli tutti, is of the utmost relevance, that ‘in this our time, by acknowledging the dignity of each human person, we can contribute to the rebirth of a universal aspiration to fraternity.’ Only through sincere and constructive dialogue will we be able to overcome the challenges that we face, while strengthening our efforts to promote the authentic protection of human rights.

“The current crisis presents us with a unique opportunity to approach multilateralism as the expression of a renewed sense of global co-responsibility, a solidarity grounded in justice and the attainment of peace and unity within the human family, which is God's plan for our world. The Holy See, renewing its constructive engagement in this Council's work, which represents a fundamental pillar of the multilateral system, will continue to engage collaboratively to this end.”

The values on which the UDHR was agreed in 1948 have been under attack from some academics and radical left-wing political activists who promote human rights as derived from governments and law and being capable of change depending on the prevailing ideologies.

Archbishop Gallagher was born in Liverpool, England, on Jan. 23, 1954. He was educated at St Francis Xavier’s College in Liverpool and ordained as a priest of the Archdiocese of Liverpool on July 31, 1977.

Matt Moran is a writer and author based in Cork in the Republic of Ireland. His forthcoming book, “The Theology of Integral Human Development: the Role of Faith in International Development,” will demonstrate how the foundational values of the Universal Declaration of Human Rights are being challenged and undermined by left-leaning academics and politicians promoting modern ideologies.