From The Guardian, March 7 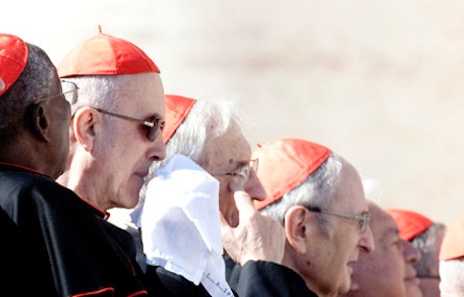 When 117 cardinals gather in Rome to choose the next pope this month, the first thing that will determine their choice is what job they are hiring the man for. Catholicism is in a crisis: the historian Diarmaid MacCullochcompares it to the great changes of the Reformation and the medieval reforms, 400 years earlier, under Pope Innocent VII.

The convulsions that started with the second Vatican council of the 1960s have still not played themselves out. On the other hand, the pope will still be a Catholic. There are not going to be female priests, and only what absolutely has to change will change. The ban on contraception will remain: the best – and the least – that can happen is that it is quietly ignored, even by the hierarchy, and no longer used as the shibboleth of orthodoxy in any priest who wants promotion. Some things can't change, and we shouldn't assume that the new leader will take up the agenda of the Guardian or the New York Times.

But it's clear from the pope's resignation that he knows things can't go on as they are. So what does the crisis look like from Rome?

There is also a strategic problem in that the church must deal with the increasing militancy of Islam in the Middle East, and, beyond that, the rise of China and India. But that doesn't require new thinking, just the application of well-practised principles.

The problems of the laity and clergy are intertwined, and in the developed world their symptom is obvious: there are not enough of either, and both are ageing rapidly and sustained only by immigration from the south.

There is little that a pope can do directly about the problem of the shrinking laity, even in an age of global travel. Wherever he goes, he can draw vast crowds, but the interest and excitement subside when he has gone. The congregations continue to drain away.

The effect has been most marked in places where Catholicism was part of the national or regional identity – Ireland, Quebec, Boston and France come to mind. But it has happened almost everywhere in the developed world. And in the countries where churchgoing has shrunk, the clergy have also got older and – by report – more gay. Seminaries have closed. More and more priests are imported from Africa, from Latin America, and from the Philippines or Vietnam.

That is something the new pope could do something about, but only by relaxing the mandatory celibacy rule. To allow the ordination of already married men on a much wider scale than already happens with Anglican converts would transform the priesthood and bind it much more closely to the laity. From the outside, such a development looks inevitable.

Whether it seems so simple inside the Sistine chapel is another question. But, if it does, the electors will choose accordingly. Paradoxically, they are more likely then to choose a cardinal from Latin America or Asia, where the celibacy rules are already widely ignored, than from Europe or North America, where they are followed in the letter, if not in spirit.

Changing the rules on celibacy would still be a convulsive step that would bring fresh problems of its own. But it may appear to the cardinals a necessary and unavoidable adjustment to a reality that can no longer be denied.

The problem of the curia is different in nature. The central administration of the Vatican is plagued by corruption allegations and obstructionism. It functions too much like the rest of Italy. A pope of enormous energy and willpower and administrative experience would be needed to clean it out. Yet this, too, may be inevitable, as the VatiLeaks scandal showed. The Italian model of politics doesn't even work in Italy. You can't run a global organisation on those principles.

Any loosening of central control would also be fraught with dangers for the church's coherence. A liberal reformer might suffer the fate of a Gorbachev and be swept aside by the forces he unleashed. I suspect that the reform of the curia would be the priority of any non-Italian European, such as Cardinal Christoph Schönborn of Austria. But I doubt the electors have any great enthusiasm for the task.