On World Day of the Poor, Pope Francis hosts and dines with Rome's homeless in the Paul VI Hall Homeless people on the streets of Rome. (Photo: YouTube)

It is more than a year since Pope Francis turned Palazzo Migliori, a palatial 19th-century building close to the papal enclave, into a shelter for homeless people.

This luxurious, four-story building with 16 bedrooms close to St. Peter's Square could have earned revenue for the Vatican as a luxury hotel, but Pope Francis wanted homeless people to live there.

The noble Migliori family, who built the palazzo in 1800, donated it to the Vatican in 1930. The Calasanziane, a women’s religious order, occupied it for 70 years and used it to house young single mothers. After they moved out, the building was renovated and was vacant.

Pope Francis directed Cardinal Konrad Krajewski, his almoner or head of the Vatican's charity services, to convert the building into a homeless shelter, Vatican media reported.

On Nov. 15, 2019, Pope Francis personally blessed and opened this palace for the poor, making the homeless his immediate neighbors.

Under Francis' pontificate, the poor have become a force to reckon with in the Vatican as he works to turn the Church's focus on the poor.

In June 2015, the 84-year-old pope footed the bill for two busloads of poor people to see the Shroud of Turin, a cloth believed to have been wrapped around Jesus after his crucifixion.

He also invited around 150 homeless people to a private visit to the Vatican museums and the Sistine Chapel in the pope's official residence.

At the request of the pontiff, the Holy See has set up showers for homeless people under the colonnade of St. Peter's Square.

The Office of Papal Charities, charged with offering assistance to the poor in the name of the Holy Father, provides haircuts and shaves to homeless people by professional volunteers. 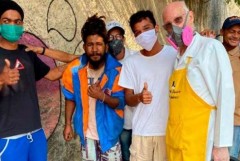 Pope calls Brazilian priest, thanks him for work with homeless

Accompanied by Cardinal Krajewski, Francis paid a 20-minute unplanned visit to a homeless shelter outside Vatican City that surprised the Roman dicasteries.

His visit to the US also took him to a homeless shelter in Washington, where he said there was "no justification whatsoever" for the lack of housing.

During his days in Argentina, Cardinal Jorge Mario Bergoglio was known as the "bishop of the slums" due to his occasional visits to the shantytowns.

Of course, Francis is not the first pope to play a good Samaritan to the poor and the homeless.  Indian saint Mother Teresa persuaded St. John Paul II to start soup kitchens and shelter homes inside the Vatican in the 1980s.

Francis has repeatedly urged the faithful to create a "poor church for the poor people."

"Let us think about Edwin. Let us think of what this man, 46 years old, felt in the cold, ignored by all, abandoned, even by us. Let us pray for him."

After Edwin became the fourth homeless person to die of cold in the city this year and the 10th since November, he urged Romans to lend a helping hand to the poor in Italy.

Italy has some 50,000 homeless people in a population of some 60 million. Rome alone is estimated to have some 8,000 homeless people, mostly Italians, who come to live on begging from tourists. Pope Francis has paid special attention to them.

Just a few steps away from St. Peter's Basilica, in the 1,200-year-old Teutonic Cemetery that is the final resting place of princes, cardinals and artists, also rests a homeless man by the name of Willy Herteleer. He got a "decent burial" at Pope Francis' insistence in 2015 in a highly prized walled burial plot.

The World Day of the Poor, established by the pope in 2016, has become the talk of the town as he hosts and dines with 1,500 homeless in the Paul VI Hall in the Vatican.

The number was reduced to 100 this year due to the coronavirus pandemic and the Italian government's curbs.

Unable to host the homeless, the Holy See sent 5,000 food packages to families in Rome containing pasta, tomato sauce, coffee, cookies, chocolate, face masks and a card with a prayer by the pope.

There are rumors that the pope sneaks out of the Vatican to meet with the homeless, but his staff has not confirmed such nighttime walks.

He instructed his almoner to hand out 300 umbrellas to the homeless. They had been left behind by tourists visiting the Vatican.

The Sant'Egidio Community, a lay Catholic association, is also involved in managing papal charity work. It staffs the Palazzo Migliori, now known as the "Palace of the Poor."

The homeless in the Vatican are getting vaccinated against Covid-19. However, the increase in deaths due to exposure to the cold is viewed as a real issue inside the Vatican.

Many may wonder why the Vatican has not opened more vacant churches and buildings to the poor. The question remains: Are Rome’s poor the sole responsibility of the Vatican?