The US military are back in the Philippines 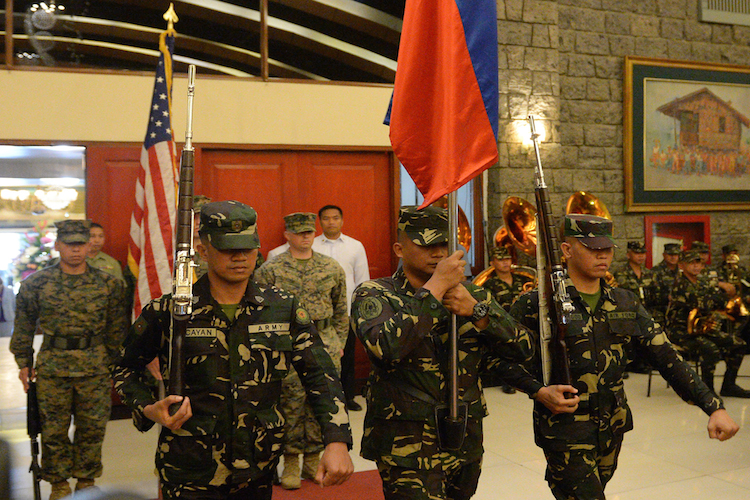 Philippine and U.S. honor guards march with their flags during the opening ceremony of a joint U.S.-Philippines military exercise in Manila on May 7. (Photo by Ted Aljibe/AFP)

On April 17, a groundbreaking ceremony was held for the building of a U.S. military facility at a Philippine Air Force base in the province of Pampanga, north of Manila.

The building of the facility is part of an agreement signed in 2014 known as the Enhanced Defense Cooperation Agreement, or EDCA.

The military deal allows the building of U.S. military facilities inside Philippine military bases. The deal is not a treaty approved by the country's legislators as required by law.

Experts have already questioned the legality of the executive agreement, saying that the approval of foreign bases in the country is the sole prerogative of the Philippine Senate.

Why President Rodrigo Duterte, a staunch critic of the United States and a close friend of China, has allowed the implementation of this agreement is yet to be known.

The ultimate and real purpose of U.S. bases within Philippine bases remains unclear.

The primer explaining the EDCA goes to great lengths to stress that the facilities are to enhance the ability of the Philippine military to defend the county from external threats.

The bases are supposed to promote between the Philippines and its ally the United States interoperability and capacity-building of the Philippine military, maritime security, humanitarian assistance, and disaster response, among others.

Even if China has constructed military facilities on several reefs and islands including airstrips, no U.S. assistance has been called for. The U.N. Arbitration on the Law of the Sea has ruled in favor of the Philippines regarding the disputed territory.

The stated purpose of the EDCA is in part to ensure "maritime security and maritime domain awareness." With China in the picture, that has been rendered moot.

Another stated objective is the "strengthening" of the Philippine military "for external defense." Are the Philippine armed forces facing any external threat, a possible invasion or attack, occupation perhaps?

No, there is none. So the implementation of the bases agreement under EDCA must have another purpose that Dutere, in his wisdom, has allowed but has remained silent about.

The facilities are to enhance training and capacity-building of the Philippine military. But these annual training exercises have continued for the past 25 years without the presence of U.S. bases.

Why so many U.S. bases within Philippine bases? Most Philippine military camps will have U.S. troops and war material stored there.

The only single reason for these facilities is to support humanitarian aid in times of disasters. That alone is insufficient to justify massive expenditure on so many facilities when the Philippine Red Cross has supposedly expanded its capability to deal with disasters.

The only threat that the Philippines is facing is internal: the communist New People’s Army and the threat from Islamist groups.

So 25 years after U.S. military bases in the Philippines were closed down and its facilities converted to civilian commercial. Years after Clark Air Base and Subic Naval Base became boom cities boasting hundreds of factories, hotels and malls, the U.S. bases are back.