The ‘unseen people’ of Tamil Nadu 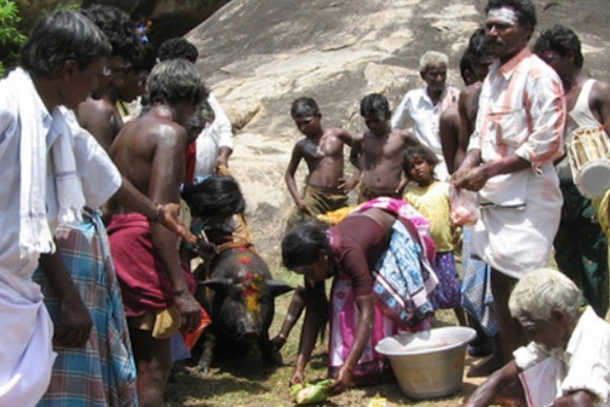 Hindu Puthirai Vannar people, one of the most discriminated lower-caste communities in India, celebrate a traditional feast in Tamil Nadu state. (Photo supplied)

By Robancy A. Helen, Trichy

Santhi Polur was beaten up for bathing regularly, cleaning her children and doing her hair. The attack didn’t come from her enemies — it came from people of her own lower caste because they believed she was offending their lifestyle.

Her community, considered the lowest of the outcastes in India’s Tamil Nadu state, even serves Dalit people — the former untouchables outside the caste system — as their barbers, cleaners and undertakers.

“That makes their social status the worst,” says Salesian Father Arul Valan, who has been working with them in the southern state for the past 17 years. “They are the Dalits of the Dalit people. Until some time back, they were not even allowed to go out and walk in the daylight.”

Indian laws now prohibit the concept of “untouchability” in any form but caste-based discrimination continues. In some interior villages, these people cannot venture onto main streets in daytime even now.

Some outcastes move to big cities to escape the oppression and accept menial jobs like selling vegetables or snacks on sidewalks.  But if they return to their community, officially called Puthirai Vannar, they are forced to once again accept the discriminative system.

That was the case with Shanti. She grew up in Bangalore and went to school there but after getting married she became part of the outcaste life in her village of Pazhyannur in Thiruvannamalai district, 160 kilometers southwest of the state capital Chennai.

The neighbors “even objected to me doing my hair. They said, 'We are lower caste. You should be equal with us,'” she says.

The state has 450,000 such people, of whom about “40 percent are Christians … and they are slowly coming out of discrimination,” says Father Valan. A member of the Puthirai Vannar community washes the clothes of Dalit people in Tamil Nadu. (Photo supplied)

“They are a tiny minority” in Tamil Nadu’s population of 72 million and “therefore, politically and socially, they are neglected. No one bothers about their wretched lives,” the priest says.

They are spread throughout the state but only “two or three families live on the outskirts of each Dalit village,” the priest said. In reality, they are not seen in society at all.

Most of these people, also known as Thurumba, spend their time washing the clothes of Dalit people and live outside the village limits in huts, without owning any land of their own.

When a Dalit villager needs someone to wash their clothes and do other menial tasks, a family from this community is bought and shown a piece of land to build a hut where they start living. Each Dalit village traditionally had at least one such family, known locally as “Oorukku-oru-kudi” (“the one family for the village.”)

They also do traditional commoners’ jobs like washing dead bodies, washing the clothes of Dalit girls when they reach puberty, and carrying torches during the procession of the deities.

Traditionally they were merely remunerated by being given food, mostly leftovers, which they were only given after begging for it at night. Nowadays most are paid, but even now in some villages, some still have to beg at night to be paid in return for their work, the priest said. Father Valan, along with Sister Alphonse of the Franciscan Sisters of St. Aloysius Gonzaga, launched the Thurumbar Liberation Movement (TLM) in 2003 to bring them into the social mainstream.

“The biggest challenge is that the community has no official identity,” he says. “In different parts of the state, they are considered different caste communities.”

In some areas, the government registers them as Adi Dravider (the original Dravidian people), a larger group which includes several lower-caste communities, who together form 18 percent of the state’s population.

“Some would argue that being counted as part of a larger community is better because it will help end their oppressive existence,” Father Valan says. “But that can happen only on paper and not in real life. Caste discrimination is a living reality.”

Social security benefits intended by the state to be paid to lower-caste people are denied to Christians among them because the state government says Christians have no caste system and is not therefore eligible.

“The government fails to understand that changing your religion doesn’t bring about any chance in your social situation,” the priest adds.

His movement demands that each Thurumba family be given a small amount of money to build a home, plus five acres of land to cultivate and earn a living. He also wants the government to fund the education of the community’s children to pave the way for their eventual liberation.

“The government is yet to react positively to the demands,” he admits. “But our fight will go on until the discrimination is ended.”