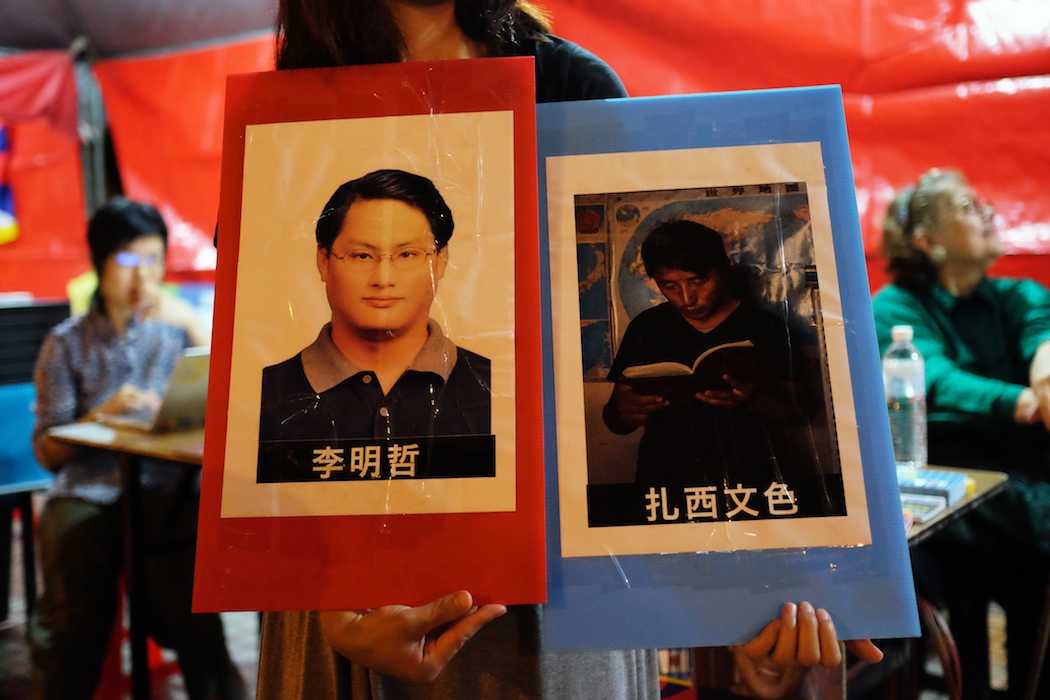 A volunteer holds placards of detained Taiwanese activist Lee Ming-cheh and Tibetan education advocate Tashi Wangchuk (right) in Taipei on June 4, 2017. Last month, Tashi was sentenced to five years in jail for inciting separatism. He had provoked the ire of Chinese authorities by requesting the implementation of education policies that incorporated the Tibetan language and culture. (Photo by Sam Yeh/AFP)

On the morning of May 22, the Yushu Intermediate Court in China's Qinghai province delivered its verdict that Tibetan language advocate Tashi Wangchuk had been sentenced to five years in jail for inciting separatism.

All he did, rights activists argued, was try to promote the cultural and linguistic rights of the Tibetan minority in China by asking the central government to adopt educational policies that incorporated rather than excluded it.

However after spending two years in detention, and well understanding China's fears about any perceived threat to its Han hegemony, he may already have become resigned to his fate.

The case dates back to Jan. 27, 2016, when The New York Times released a documentary about a lawsuit filed by Tashi, who accused the Chinese Tibet local government of failing to protect and promote Tibetan culture.

After the video was broadcast, he was arbitrarily detained.

His case was finally opened for trial on Jan. 4 this year.

Officials from the embassies of the United States, Germany, Canada, the United Kingdom, and the European Union requested authorization to travel from Beijing to Yushu, a county-level city in the Yushu Tibetan Autonomous Prefecture in southern Qinghai, to attend the trial but all such requests were rejected.

"Tashi argues that he has been only expressing his own opinions on the Yushu government's measures and programs in teaching the Tibetan language," said Liang Xiaojun, one of Tashi's defense lawyers, before the trial.

"He has not shown any intention or instigated any action to try and split the country," Liang said.

"As such, we have filed a 'not guilty' plea and I think the court will listen carefully to our argument," he added.

"Tashi is only exercising his rights as a citizen of the People's Republic of China. Tibetans are also Chinese citizens."

The international community was also shocked that such a request by an individual could possibly merit incarceration.

"This action by the Chinese government sends a chilling message meant to silence its critics," said a spokesperson for the NYT.

The U.S. State Department also issued a statement expressing its "deep disappointment" when the verdict against Tashi was read out. It requested he be released immediately.

The Tibetan Centre for Human Rights and Democracy condemned the verdict as being "a great irony and mockery to China's constitution and its law on regional national autonomy, both of which protect ethnic languages and cultures."

"Other Chinese laws and regulations let Tibetans use and learn their own language," it added.

The center also noted there was no basis for Beijing to consider the language rights of "ethnic minorities" as being in some way detrimental to national security or national unity.

So why did an ordinary Tibetan businessman receive a five-year sentence simply for asking the authorities to implement Tibetan language and cultural education policies in education?

Experts say one reason is because of the Chinese people's ingrained notion that those who belong to different ethnicities are of "a different heart." Moreover this is coupled with the Chinese Communist Party (CCP) identifying Tibetan religious culture as a threat to national security under the rule of Chinese President Xi Jinping.

The authorities used this as justification to suppress and further crack down on Tibetan religion, culture and intellectuals.

Some would counter this seems strange given that Beijing invests a considerable sum each year to protect Tibet's religious culture.

But that which it protects is a "Sinicized" version of Tibetan religion and culture. And when it comes to warping reality to better suit the Chinese worldview, or by Sinicizing Tibetan Buddhism and assimilating Tibetans, the government has shown it has no issue with shelling out Renminbi.

The problem is that this is no longer authentic Tibetan Buddhism, but an amended version that has been politicized or imbued with a different ideology.

However, the Tibetan language does not exist merely to serve the whims of the CCP; it is designed to allow Tibetans to express themselves freely.

This expression is not only a reiteration of history and a display of tradition, but more importantly the manifestation of feeling, thinking and having certain desires for one's own country.

Unfortunately, Tashi's case once again proves that Tibetans do not have the right to fully or freely express themselves.

As the CCP continues to enforce what is effectively colonial rule in Tibet, the local culture is starting to serve as a tool for the ruling power, something that can be bent and exploited rather than protected and developed.

Tibetan monasteries, which rank among the chief storehouses of this Chinese province's traditional culture, must be a constant eyesore for the CCP, especially as monks are responsible for inheriting and carrying forward Tibetan culture.

Chinese authorities have expelled monks from monasteries, imposed restrictions on the number and age of monks that can reside in them, and introduced Communist Party organizations to manage temple affairs.

In addition, many young people worry about what tragic fate lies in store for the Tibetan language and culture, with Tashi's case seeming to crystallize all these fears.

But when they voice their concern the government reverts to its default setting by threatening to sue them for "inciting separatism" and then throwing them in jail.

As the CCP's policy appears to be eliminating any notion that Tibet was once a separate nation, successive Chinese governments have continued advancing toward this so-called "magnificent" goal.

This means that people like Tashi, who just want to protect their mother tongue and culture, as seen as obstacles to be removed and severely punished.

Under such circumstances the outcome of any advocacy aimed at protecting Tibet's religious culture can only mirror the fate of Tashi, who now has to spend the next five years locked in a cell for an imagined crime he did not commit.

Such a tragic reality may be beyond the comprehension of many people living in countries that are governed by the rule of law, but for Tibetans, this is not the first case of its kind and it certainly will not be the last.