The tears of Ukrainian refugees 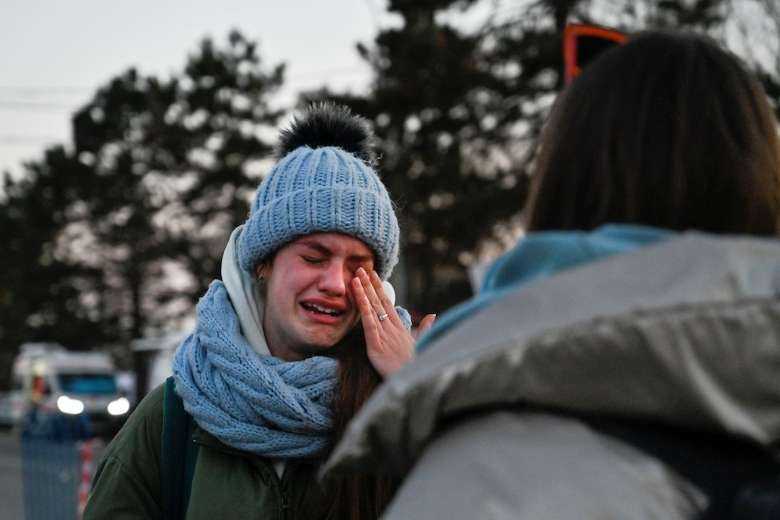 A Ukrainian girl cries after crossing the border to Siret, northern Romania, on March 19. More than 3.3 million refugees have fled Ukraine since the Russian invasion, while nearly 6.5 million are thought to be internally displaced. (Photo: AFP)

I belong to the generation of those who were born in the 1980s in Vietnam and grew up in peace. I was only told about wars having erupted in the country.

When I worked abroad, I heard about nasty stories of Vietnamese people who were evacuated from war zones and those who fled the country by boat.

No matter how vividly those stories were narrated, I hardly felt the pain and suffering people endured during wars as well as on the way to seek asylum abroad. But I could sympathize with them.

These days all people around the world are seeing the serious outbreak of war in Ukraine. A constant massive flow of refugees has been pouring into the neighboring countries of Poland, Hungary, Slovakia and Romania.

European countries are welcoming all Ukrainian refugees with open arms. My community based in Hungary also puts in a great deal of effort to provide refugees with accommodation.

This week two adults and three children were driven to our community. All of them were completely burnt out after long-distance journeys to look for safe places. Moreover, the adults had their tears dried up over the utter desolation of their nation, homeland and families. After greeting them, we brought them into ready-made rooms with food, water and other necessities of life, and we also prayed for them a lot.

We try to create favorable conditions for those who temporarily stay at our community to feel that the community is a real home away from home. Hopefully our services can reduce some of their suffering.

We and they used Google to communicate with each other. They speak Ukrainian while we speak English. I asked them where in Ukraine they were from. A woman who spoke a little English said they were from a city near the capital Kyiv, and then she burst into tears.

I knew she cried for her homeland being devastated by bombs and rockets, her family being torn apart by heavy fighting, and the absurdity of the war ruining the peace and prosperity of her family and the Ukrainian nation. I suddenly realized that I should not ask more about her country since I was afraid that she would not be able to hold back her tears.

I promised to continue praying for her as all other people around the world were praying and accompanying her nation. Then we continued with the necessities and left a quiet space for her and others to sleep.

Only now do I understand the absurdity of war. The war has been devastating countless buildings, systems and services in Ukraine built by succeeding generations, killing numerous civilians and forcing millions of others to lose their homes and leave their homeland. The war has taken away the future of children, the peace of families and communities, and other good things that the Ukrainian people should have enjoyed.

A few days ago, I watched a video clip of a mother bitterly crying for her child who had died from enemy bombing. She wildly shouted, “Why? Why? Why?” No one wants to go to war. "Why?" is always a question that people who are concerned about war often ask.

I am close to the war because I am in Hungary. I do not have a clue if the war will spread to other countries, but I clearly understand its horrors and damage.

"Many people are still on evacuation routes, while innumerable others are trapped in military operation zones because humanitarian corridors to allow civilians to leave have been broken"

Although I am not on the battleground, I learn of the appalling tragedy for countless people through the refugees I meet and follow on the internet. Children, women and the elderly are suffering most terribly. Many people are still on evacuation routes, while innumerable others are trapped in military operation zones because humanitarian corridors to allow civilians to leave have been broken. On the battlefield, many have their fathers, husbands and relatives caught in the crossfire.

Perhaps the above woman's tears partly show the horrific consequences of the war in Ukraine.

People from Vietnam can also feel the suffering of the Ukrainian people through the media, and those who were born in the 1950s, 1960s and 1970s in Vietnam all had direct experience of wars.

With that in mind, we should continue to pray for peace in Ukraine. As Archbishop Sviatoslav Shevchuk of Kyiv-Halych, head of the Ukrainian Catholic Church, said: “We believe that in this historic moment the Lord is with us. He, who holds in his hands the fate of the whole world and of each person in particular, is always on the side of the victims of unjust aggression, the suffering and the enslaved.”

Many people wish the Ukrainian woman's family can find peace and quiet. They will take a few days of rest in our community and then leave for another country where their relatives live. On that journey, may God always be with them and may many people willingly come to their help. I hope cheerful smiles will spread over their faces, and children's fun and frolics will remind us of a peaceful life.

I understand why war and peace cannot exist in the same place at the same time. No one wants war, so we continue to pray for peace. Instead of “if you want peace, prepare for war,” God teaches us another way: “If you want to avoid war, build peace.”

* Joseph Pham Dinh Ngoc is a Vietnamese Jesuit based in Hungary. The views expressed in this article are those of the author and do not necessarily reflect the official editorial position of UCA News. This article was summarized and translated by a UCA News reporter from a Vietnamese article published by dongten.net here.