The tailor who has dressed every pope since 1922

This article is combined with a video from Rome Reports 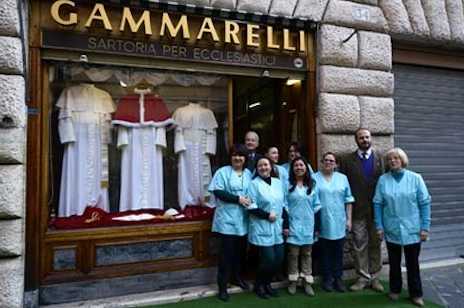 Making bespoke clothes is tricky when you don't know who will wear them. But Gammarelli, the Roman tailor that has dressed every pope since 1922, gets around that by catering for every eventuality.

Unveiled in its window on Monday were three ivory cassocks in small, medium and large – a choice which it hopes will keep it covered no matter who emerges from the Sistine Chapel as the next leader of the Roman Catholic church.

Alongside the robes would go a white skullcap, a red velvet cape and four or five pairs of red shoes, said Lorenzo Gammarelli, one of the business's owners.

"We are providing more than three pairs of shoes because you can adjust a cassock or a suit but you must wear the right size shoes," he said.

Cardinals have yet to fix a date for a conclave to elect Benedict XVI's successor, but once they do, the cassocks and other papal paraphernalia will be dispatched from Gammarelli to the Vatican. They have to arrive before it begins, said Gammarelli, as the new pope will need them for his first appearance before the faithful in St Peter's square and they will not be able to enter once the secretive proceedings kick off.

The business, which has been catering to the Roman curia and papacy since 1798, has supplied every pope since 1922 when it began keeping records, Gammarelli said.

The seven pontiffs ranged in size from the portly John XXIII to his slender successor, Paul VI.

However, Gammarelli, based near the Pantheon, does not have a monopoly: Benedict, who wore Gammarelli for his first appearance as pontiff, provoked some controversy during his eight years as pope when he was reported to also be ordering tunics from rival outfitters Euroclero.

This time, the business has had to work even harder than usual to get the clothes ready on time after Benedict's shock abdication. (continued...)

"We were completely surprised, as everyone else I think," said Gammarelli. The fact that the pope had not died meant that the mourning period usually observed for nine days did not take place.

"We received the order a few days after Benedict declared that he was going to resign and we finished on Friday, so we took quite a while," he said. "To make one cassock we need three and a half days."

Each cassock is made of ivory satin wool with silk cuffs. The large model is thought to be modelled on papabili such as Timothy Dolan, the archbishop of New York, while the small may be orientated more towards his fellow cardinal Luis Antonio Tagle, from the Philippines.