On Nov. 29, 2020, Mount Lewotolok, locally known as Ile Lewotolok or Ile Ape, erupted on the Indonesian island of Lembata. Formerly known as Lomblen, Lembata is a separate regency, part of the province of Nusa Tenggara Timur (NTT). Demographically, it is a relatively small island with a population of just over 145,000.

Indonesian is widely spoken throughout the island, but there is also a regional language, Lamaholot, spoken in a variety of dialects in different villages and districts. Lamaholot is also spoken in the eastern part of the islands of Flores, Adonara, Solor, Alor and Pantar, but with slight variations in terms of stress and intonation. On the eastern part of Lembata, another distinct native language, Kedang, is spoken.

Eruptions of Ile Lewotolok have occurred several times since late November. Some explosions were so loud that they could be heard throughout the island and even as far as neighbouring islands such as Adonara and Pantar. Smoke was visible, cold lava flowed down into the valley, gravel and ash fell in areas around the volcano and even on the nearby island of Adonara.

Most people living around the volcano left their villages, but dozens of village elders decided not to move. These elders, as I was told, were confident that the eruptions wouldn’t hurt or kill them even though their homes are located close to the lava path, which is of course very dangerous. They seemed to have no fear whatsoever. They strongly believe that if we look after nature, then it will look after us; nature won’t destroy us.

Interestingly, according to some villagers, despite the powerful eruptions, the forests near the peak of the mountain were not destroyed. No trees fell, and the grass remained green. There were also no earthquakes, as often occurs before or during eruptions. This was the testimony of at least two elders who climbed the mountain on Dec. 29 to observe the top of Mount Lewotolok. They also claimed that the weather there was rather cold, and there were no signs of destructive impacts of the eruptions.

Apparently the two elders wanted to climb up the mountain to look into the crater while there was no cloud covering it. Is this an act of bravery or stupidity, or a bit of both, when the mountain was then still actively erupting?

The locals believe that the eruptions of Ile Lewotolok occurred because the supernatural beings occupying the mountain were angry with the exploitative behavior of humankind towards nature. Human failure to take care of nature is believed to anger the spirits of the mountain, and their anger is demonstrated through natural disasters such as volcanic eruptions.

So when Mount Lewotolok erupted on Nov. 29, dozens of village elders refused to leave their villages. They said they had to remain in the village to try make peace with the mountain spirits through a peace ritual to stop the eruptions.

Since then a peace ritual has been conducted at a certain place on Mount Lewotolok by those known to have the authority within the social structure and those who have supernatural power, locally called molan. The volcano seemed to stop coughing out gravel, ash and lava, continuing only with smoke and some rumbling. The locals quietly declared that their peace ritual had been accepted by the spirits. Those who left their villages at the end of November began to return home beginning Jan. 4.

This story highlighting the connection between volcanic eruptions and supernatural forces can also be found in other places in Indonesia. The Balinese people, who adhere to the Hindu Bali religion, believe that their gods live on Mount Agung. It is a sacred mountain and is thus believed to be the spiritual epicentre of the Balinese cosmology. 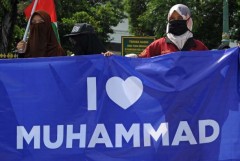 The several eruptions of Mount Agung in the years since 1808 are believed to be a supernatural warning of the loss of cosmological balance or harmony — a philosophy called Tri Hita Karana. Human beings are warned about their destructive behaviour toward the natural-social environment and of their failure to maintain harmony with the gods, and that they must immediately improve their way of life and deeds.

The gods' anger, however, is best managed through ritual prayers and offerings, asking for pardon and requesting the mercy of the gods. In Java, there are also legends about supernatural beings living on mountains such as Merapi. To the locals, volcanoes do not spew things out without reason, and the reason is supernatural in nature.

To someone educated in Western science, the failure of some people to evacuate in the face of an impending eruption seems irrational. The locals often look to shamans for answers to questions such as: Why did the volcano erupt, and what do I do now? The answer to the first question is based on myth, while the answer to the second is always to follow some traditional volcano ritual.

When Mount Merapi in central Java was about to erupt in 2006, both Indonesian and foreign volcanologists were frustrated as the locals refused to immediately leave their villages. At the time, the scientists told the locals to leave, as both the hot lava and ash could be deadly. Instead, in response, at a nearby village, holy men and hundreds of their followers lit incense and placed rice and fruit and other offerings in small, makeshift boats, then sent the miniature flotilla down a river.

Apparently, it was an important ritual believed to prevent their villages from being destroyed by the eruption of Mount Merapi.

Indeed, the locals continue to see volcanic eruptions as a supernatural event, rather than simply a natural phenomenon; this is demonstrated in volcanic myths and rituals that can be observed throughout Indonesia.

Justin Wejak studied philosophy in Indonesia, theology and anthropology in Australia and currently teaches at the University of Melbourne.