As Islamist protesters cause chaos again, Christians should mobilize to oppose the forced conversion of minority girls 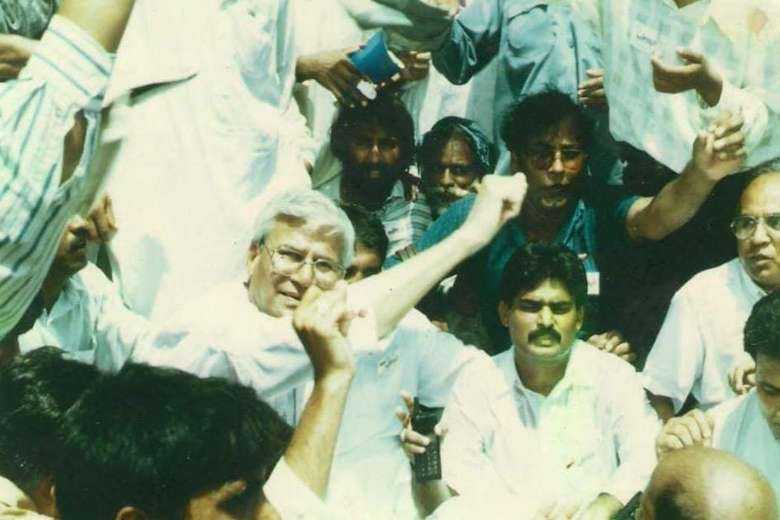 It's that time of the year again when shipping containers block roads, internet services are suspended and the Pakistani state submits to Islamists.

Radical Islamist party Tehreek-e-Labbaik Pakistan (TLP) is once again making headlines as about 7,000 protesters stage a sit-in at Muridke, some 33 kilometers from Lahore. Ten people, including three policemen, have died since clashes erupted last week.

The banned outfit is demanding the release of its 23-year-old leader Saad Hussain Rizvi and the expulsion of the French ambassador over cartoons depicting the Prophet Muhammad. Rizvi was arrested in April when Pakistan's government outlawed TLP in response to violent anti-France protests.

The federal government on Oct. 24 released more than 350 TLP activists while announcing that cases against others would be withdrawn. Authorities have also dug trenches on GT Road to prevent the religiously charged convoy from moving toward capital Islamabad. This is the first time such tactics have been used to stop a protesting religious party.

Six police officers were killed in April when TLP staged days of rallies which paralyzed roads. I was stuck in Rawalpindi for a night amid chaos.

“The killing continues in the name of religion. We have seen it in the past. The influential people run factories of fundamentalists and profit from the produce. But no one cares for the general public,” Catholic lawyer Akmal Bhatti wrote in a Facebook post.

Our people don’t share the same passion. We neither have the leadership nor resources to manage such a large crowd

Bhatti marked National Minorities Day on Aug. 11 with a public rally joined by hundreds in Islamabad against the forced conversion of minor girls. He recently sparked a discussion on Facebook by asking if minorities could react like TLP to ban these conversions.

“We are cowards. Can’t do this,” commented a former member of Pakistan Tehreek-e-Insaf (PTI) minority wing in Attock district of Khyber Pakhtukhwa province.

“Our people don’t share the same passion. We neither have the leadership nor resources to manage such a large crowd,” replied a journalist. Another netizen called for unity.

The last time Christians showed some muscle was in 2015 when thousands rioted in Lahore, smashing property and vehicles as they clashed with police on a second day of protests against twin Taliban suicide bombings of churches that left 17 dead in Youhanabad.

Unlike TLP activists, dozens of Christians spent five years in prison for the murder of two Muslims wrongly suspected of carrying out the church bombings. Two Christian suspects died in prison. Careers were destroyed. Many left the country.

I am not advocating violence but simply hinting at the “otherization” of Pakistani citizens that makes them unequal before the law. Religious minorities believe that the police disproportionately collude with aggressors rather than empathizing with them.

According to the Karachi-based Legal Aid Society, religious minorities in Sindh province lack trust in the justice system, which stems from unfair treatment by government officials such as the police and other judicial and administrative actors.

“Actors in the criminal justice system [police] are often accused of being unresponsive to complaints by religious minorities, especially in criminal cases of blasphemy or forced conversions. Police are generally prejudiced against these vulnerable communities and their cases are not thoroughly investigated and correct procedures provided in the Criminal Procedure Code are not followed,” stated the Legal Needs Assessment Survey published last week.

“A larger percentage of individuals with criminal issues faced issues of ill-health, stress, breaking down of family relationships, harassment, threats, forced relocation, financial loss, lack of confidence and intoxicant addiction, which they directly attributed to their problems.”

Who can forget video clips of Punjab Rangers’ Major General Azhar Naveed handing out envelopes with a token 1,000 rupees (US$5.70) as bus fares to TLP members who were released from detention following a government agreement with protesters in 2017?

TLP is not going anywhere. Not for any foreseeable time. It is being kept intact by the state as a permanent political nuisance to be used for political maneuvering

Since 2017, TLP has been holding annual protests and damaging properties worth millions of rupees while threatening the state. Then opposition leader Imran Khan supported TLP's demands as he was trying to topple Nawaz Sharif’s government. Now he is facing the same dilemma amid surging petrol prices and the depreciating Pakistan rupee. Critics blame the state itself for creating such groups.

“TLP is not going anywhere. Not for any foreseeable time. It is being kept intact by the state as a permanent political nuisance to be used for political maneuvering,” said rights activist Jibran Nasir.

“However, to keep up this political drama, young men whose love for the Prophet Muhammad will be exploited will be sent for violent confrontations and civilian police officers will continue to risk their lives. In short, the poor and weak of society will die for the sick, vile and twisted power games of our country's establishment.”

Despite these challenges, Christians in Pakistan are known for their activism and struggle for human rights. Bishop John Joseph, the first chairman of the Catholic bishops’ National Commission for Justice and Peace, spearheaded a successful nationwide protest in 1992 when the government attempted to make people state their religion on applications for a national identity card.

The commission led another national campaign for the abolition of separate electorates in 2001. The demand was accepted in 2002 and the commission received an international human rights award for its efforts.

To answer Bhatti’s query, we can mobilize a movement against forced conversions and marriages of underage Christian and Hindu girls if a bishop takes charge of affairs. The power of the pulpit can mount local and international pressure. I have seen lambs of Christ roaring like lions when led by a brave bishop. Consecrated press statements, photo sessions with executives of the federation and indoor rallies won’t solve anything.

“Without taking the law into our own hands, we can raise our voices against this gross human rights violation. Sadly, there is no unity among churches at denomination level,” Reverend Riaz Arif Malik, the Church of Pakistan’s former vicar of Lahore Diocese, told me.