The struggle for land and reconciliation in Sri Lanka 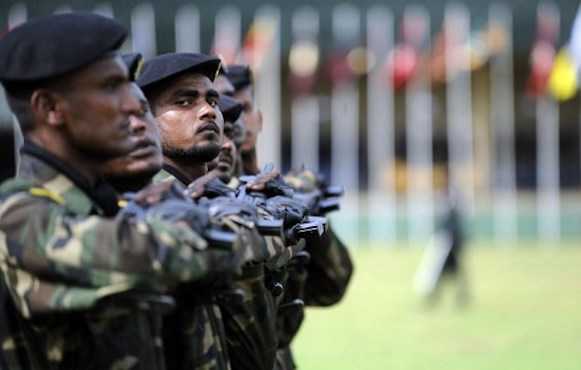 Earlier this month, I was at the historical Catholic church in Mullikulam, in Mannar district, in northern Sri Lanka. Mullikulam is a beautiful village, bordering the sea, a river, forest and many small lakes. For more than nine years, the village had been occupied by the navy, displacing the local people.

After years of protests and negotiations, helped by some church leaders, the navy on April 29 agreed to release some parts of the village and villagers were allowed access to the church, school and some farmlands.

"When we left in 2007, there were about 100 houses in good condition and about 50 other mud and thatched houses. From what we can remember, there was also a church, several school buildings, two hospitals, a library, post-office, 10 wells and nine water tanks," said 88-year-old Francis Vaz.

But now despite the navy agreeing to release some parts of the village they are still not allowed full access to their cultivation lands, small lakes, and the river or to get to the sea through the village. Neither are they allowed access to the traditional cemetery, community buildings and their own houses.

Vaz, who I had got to know during the period of displacement, is among the people unable to go home to his own house. Navy officers were quick to stop us from getting closer to his house or even taking photographs from a distance.

He and the whole village were evicted by the Sri Lankan armed forces in September 2007 who promised to allow them to return in three days. That never happened and the navy occupied their land.

The civil war ended in 2009 and Sri Lanka elected a new government in January 2015 that committed to returning land taken by the armed forces. They have released some land but much more remains occupied. Of course, there are other land issues not limited to military occupation.

Northern Tamils intensified their protests this year. After months of determined action some land in Pilakudiyiruppu and Puthukudiyiruppu in Mullathivu district were released in March. Another small plot of land occupied by the army was released after renewed protests by the Paravipaanchan community in Killinochchi district around the same time.

These successes have led to others launching indefinite protests, such as in Kepapulavu and Vattuvahal in the Mullaithivu district and Iranaithivu in the Killinochchi district. Some protesters say they will not stop until their lands are returned, keeping overnight vigils and braving cold nights and intense heat.

The army and navy have also occupied land belonging to Muslims. A local Muslim friend pointed out occupied lands in Mannar district in the Northern Province where Mullikulam is also situated. Sinhalese lands have also been occupied by the military, such as in Panama in the Eastern Province.

Since March, Muslim communities in Marichikattu have been protesting against their imminent displacement after the president declared their traditional lands a forest reserve. A banner proclaiming "Evicted by the LTTE (Liberation Tigers of Tamil Eelam, also known as Tamil Tigers) in 1990 and thrown out by the Sri Lankan Government in 2017" indicated their frustration.

In Pannankandi in the Kilinochchi district, Tamil villages have demanded permanent titles to land where they have been living and working since 1990. They were resettled there after they were displaced by war but now they face imminent eviction by the original Tamil owners many of whom live overseas.

The struggle for land is beyond ethnicity and militarization. Establishing new military camps, forest reserves and tourist attractions threatens to dispossess and displace more people. Communities who have been landless all their lives have also started agitating for land ownership.

Even the limited release of lands has come with serious problems. When I visited villages that had just been released after about eight years of army and air force occupation, I saw how the military had looted even toilet fittings, doors and windows just before the hand-over. I also saw buildings that had been razed to the ground.

The government has provided no facilities and there have been no reparations. In Mullikulam, people left behind expensive and important assets like fishing boats and nets which were never returned. As protests and negotiations continue, these will also have to be taken into consideration.

The need for support

Land for many rural communities is much more than property with a financial value. It is linked to culture, religious practices and it is part of individual and collective identity. It is critical for their livelihood and important for food security. Several people I have met talked of how they have to buy coconuts, a common ingredient in daily cooking, instead of just plucking them from their own trees.

Alongside protests, negotiations with the military and the government also continue. In the case of Mullikulam, which is 100 percent Catholic and where a significant part of navy-occupied land belongs to the Catholic Church, church leaders have been part of the negotiations and protests. Mass and prayers have also been held at the protest site.

Few priests and nuns, Buddhist monks, activists, politicians, students and media personnel have all supported the people's struggle but overall, in the Catholic Church and Sri Lankan society, support for has been minimal.

Every time I have been with the protesters, government rhetoric and the theories of some intellectuals seems at a disconnect. Until and unless occupied lands are returned to their historical inhabitants and the landless have access to resources and livelihoods, reconciliation and social justice will be elusive. It is impossible to restore dignity and healing without ensuring the right to land, housing and livelihood.

Spontaneous and scattered local protests have helped regain some lands and raised awareness of these long-standing problems. These could become the basis for a stronger and more coordinated movement, driven and led by affected communities, with support from the country and internationally.

Vaz said something that had a strong impression on me. "We had everything now we're living in a jungle. How can we live like this? I have faith that we'll get everything back, at least so our children and grandchildren can see and enjoy the home we grew up in."

Ruki Fernando is a Sri Lankan human rights activist who was detained under the Prevention of Terrorism Act and is still under investigation with restrictions on free expression. He is a member of the Justice, Peace and Integrity of Creation Commission of the Conference of Major Religious Superiors.