The special ties that bind the Vatican with Korea 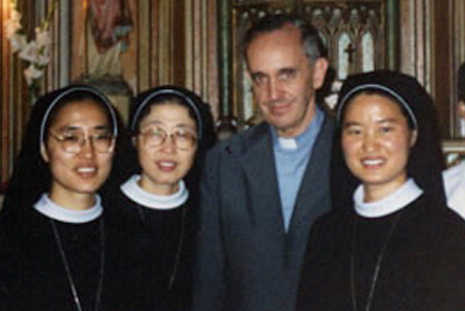 Then auxiliary bishop of Buenos Aires, Jorge Bergoglio, with a group of visiting Korean nuns in 1993. (Photo courtesy of Yonhap News Agency)

By Do Je-hae for The Korea Times, Seoul

The last head of the Catholic Church to visit Korea was Pope John Paul II, who came here in 1984 and 1989.   Older believers in the Catholic faith remember the moment when the late pontiff landed at Gimpo Airport in May 1984.

He kissed the ground, repeating "land of martyrs, land of martyrs," showing respect to those who lost their lives in bringing the religion to Confucian-dominated Korea in the 19th century.

At least 8,000 Catholics were killed during that period, 103 of whom were canonized en masse in May 1984.   Only around 10.5 percent of the nation's population is Catholic, but the religion has a special place in Korea's history.

Korea established its first apostolic vicariate during Pope Gregory XVI's reign in 1831.   As the nation eagerly awaits the August 14-18 visit of Pope Francis, The Korea Times looks back on the special ties the country has had with the Vatican.

The Catholic Church has been a staunch supporter of the nation's democratization and inter-Korean reconciliation.   Why did the Vatican pick Korea as the destination for a first Asian apostolic voyage in more than 10 years?

While not a dominantly Catholic country like the Philippines, Korea is among the few Asian countries that has seen significant growth in the number of believers in recent years.

“Korea is an amazing country,” said Bishop Mario Toso, secretary of the Pontifical Council for Justice and Peace during a recent press conference in Seoul.

“Its church is beautiful and strong, has a lot of martyrs and engages in a lot of activities.”

The late Pope John Paul II travelled to Korea twice in 1984 and 1989. As with Pope Francis’ August 14-18 Korea trip, martyrs, young believers and people in need were the focus of the late pontiff’s visit. He remains the only pope to visit Korea more than once.

Pope John Paul II’s first visit was during the Chun Doo-hwan administration on May 3-7, 1984. Upon arriving, he quoted a line from the first clause of the “Analects of Confucius”: “Is it not a joy to have friends coming from afar?”

During his 1984 visit, he canonized 103 martyrs in a historic ceremony.   Ahead of the canonization, he celebrated mass in Gwangju, a southwestern town devastated by the Gwangju Democratic Uprising that had taken place four years earlier.

He renewed the world’s attention on Korea’s democracy movement by travelling there and praying for peace and reconciliation.

In his prayers, the pontiff often remembered the longstanding political and military confrontation in the Korean Peninsula and showed concern for the humanitarian issues in North Korea.

While his successor Pope Benedict XVI didn’t have a chance to visit Korea, he also prayed for inter-Korean peace.   In his first trip to Asia since succeeding Pope Benedict XVI in March 2013, Pope Francis will undertake a string of historic programs.

The first Jesuit pope will beautify 124 Korean martyrs who were among 10,000 mostly lay Catholics killed in persecution in 19th-century Korea still dominated by Confucianism.

His ties to Korea started in the early 1990s, at his hometown of Buenos Aires.  As Auxiliary Bishop of Buenos Aires, he had encountered nuns from Korea who had moved him deeply with their service to patients at local hospitals.

“We Argentineans see the Virgin Mary in the Korean nuns,” he wrote in a letter to the Missionary Sisters of Korea in 1993. The letter was recently released to the press by a committee organizing his visit.

“Although they don’t speak Spanish very well, they communicate with the patients in the universal language of love and care.”