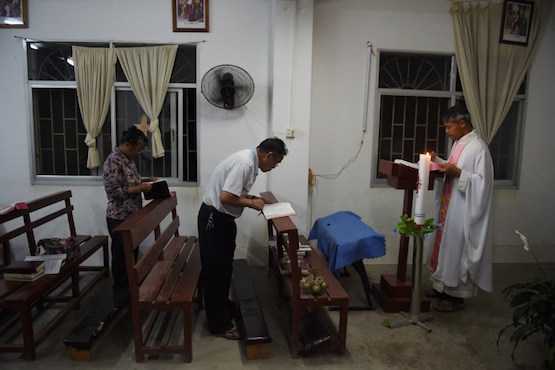 This photo taken on May 11, shows parishioners during a Mass at a Catholic Church in the county of Dingan, in China's southern Guangxi region. The county also has a "patriotic" museum that features the execution of St. Father Auguste Chapdelaine (1814-56) as part of its main theme of condemning the "spiritual opium" of religion. (Photo by AFP)

After the expulsion of the Apostolic Internuncio of the Holy See to China in 1951, it can be said that the Catholic Church in China lost its communion with the universal church in an external sense, but in an essential sense, is not a schismatic church. On the contrary, it is a church that actively seeks to resume its communion with the universal church.

Communion with the universal church should not just be a spiritual connection, it should also be expressed through the concrete action of the Roman Pontiff appointing local bishops. But over the last 60 years this has not been understood by the Chinese government, so it has been difficult for the pope to formally appoint Chinese bishops and the communion between the church in China and the universal church has not been manifest.

After working for many years on this issue, the Catholic Church has gradually gained the reconsideration of the Chinese government, which is now willing to reach an understanding with the Holy See and seek a mutually acceptable plan.

However, many people in and outside China who are concerned about the China church are worried. They wonder if Vatican officials or the pope himself may go against the church principles and aim their criticism and strong reproaches at certain Vatican officials. They even directly pinpoint their attack on the current pope, claiming that Pope Francis has violated church principles upheld by Pope John Paul II and Pope Benedict XVI.

Since there are many Chinese priests who are concerned about this, I think we ought to give them a clear and comprehensible explanation of these issues of concern.

Pope Francis said during his interview with Asia Times on Jan. 28 that it is the responsibility of the Roman Catholic Church to respect all civilizations and this is true also to the Chinese civilization. Yet the gospel does not enter into a country, ethnic group or culture in an abstract way, but concretely through the person of Christians.

People will more easily experience, understand and accept the gospel if Christians themselves live out its spirit and values — charity, peace and mercy. Yet if Christians themselves, due to some constraints that they are facing, have caused the expression of the gospel to become a kind of  "threat," or due to their identity as "outsiders" are suspected of having "conspired," then, the spread of the gospel will be hindered.

The reasons the transmission of the Christian gospel into the society and culture of China have met stumbling blocks and several-times been prohibited from developing are none other than these. The evangelical mission of the Catholic Church to the people in China urges us to act pro-actively. Therefore, the way to help certain people to let go of their misunderstanding and skepticism about the Catholic Church is through proactive dialogue and communication.

Since the reopening of mainland China in the 1980s, the Catholic Church has countless times, through Pope John Paul, Pope Benedict and the current Pope Francis, actively extended olive branches to China, to communicate her goodwill for dialogue. Both sides have also sent delegations for mutual visits to carry out face-to-face meetings. In its two-decade-long goodwill and patient communication, the Holy See has responded with persistent humility and patience rather than hostile words when being misunderstood.

The purpose of dialogue

In sum, the goal of the dialogue between the Holy See and Beijing is to strive for and protect the rightful religious freedom and rights of the China church that are written in the Chinese Constitution. The Holy See hopes to point out that the Catholic Church respects the legal sovereignty of the country, the legitimate power and responsibility of its rulers and its laws.

The mission of the church is not to change the institution or administrative agency of nations. It cannot and should not intervene in political struggles. Therefore, the Catholic Church should also dialogue with Beijing with an attitude of "respect and charity." It is of course not to sacrifice its principles. If it were not for the purpose of protecting the truth and the principles of the church, why would the church repeatedly try to dialogue with Beijing?

The above principles are applicable to the way the Holy See deals with the China church. But because inside China there are people who are skeptical and worried about the pope having the final decision-making power on bishop’s appointment, this has become the most sensitive issue in this mutual relationship.

The Holy See is willing to reach a mutually acceptable consensus under the premises that the principles of the Catholic faith and of ecclesial communion are not violated, for dialogue does not run counter to the hierarchical communion of the church.

There are mainly two ways the pope appoints local bishops. First, the pope himself freely appoints. Second, the pope approves as bishop the person elected in accordance with legal provisions. If there is no legal provision on which the candidates for the episcopacy ought to be based, then the pope will use his own judgment to appoint bishops, without being restricted by any civil or religious power.

In concrete practice, they may be adjusted according to what is feasible in the local situation. On the election of bishops by the Apostolic See and the Chinese government, the Apostolic See should not be criticized over the way it decides on the appointment of bishops in China, so long as the above principles are not violated. The Apostolic See also has the right to set up special provisions to target the specific circumstances faced by the China church.

Currently, there is still no bishops’ conference accepted by the Apostolic See in China. If the Bishops’ Conference of the Catholic Church in China, after fulfilling the basic requirements of the church, is in the future accepted by the Apostolic See as legitimate, it, or the bishops in the provinces under it, would have the right and responsibility to recommend episcopal candidates they consider as suitable to the pope. Certainly, it would only have the power of recommendation, while the power of final decision would still be reserved to the Apostolic See.

On bishops' conference in China

In mainland China, there are also some bishops of the clandestine churches not yet recognized by the government. Some may still be living in situations deprived of freedom and are unable to exercise their episcopal ministry. Consequently, a future bishops’ conference in China would have to include all the legitimate bishops of the open Church as well as the clandestine bishops.

To strive for and protect the legitimate authority of the bishops of the clandestine churches in China, Rome should also conduct a dialogue in order that these bishops be recognized by the government as legitimate. Some people are worried that the illegitimate bishops are being treated with excessive leniency in Sino-Vatican negotiations puts the principles of faith and communion of the church in second place. Such worries are unnecessary.

If the Holy See has any intention of forsaking the principles of faith and communion of the church, there would actually be no need for it to dialogue and negotiate with the Chinese government. The unceasing dialogue actually represents the unwavering stance of the Holy See towards this question.

Some people are concerned that the dialogue between the Holy See and the government may sacrifice the legitimate rights of the clandestine churches. Some are worried that the clandestine bishops in prison may be forgotten. I believe that this worry could represent a mistrust of the love of the Holy See towards the church in China. This way of thinking may indeed be an offence against the Holy See and its delegated representatives in the negotiations; it should not come from the hearts of us Catholics.

The sacrifice made by the clandestine churches in their perseverance in the faith of the Church is universally acknowledged. The universal Church also demonstrates its concern for their struggle for survival by trying to lend a helping hand to it in all sorts of ways. The dialogue between the Holy See and Beijing in fact aims to change the clandestine churches’ abnormal condition for survival, so that they may soon practice their religious faith under the protection of the law.

The dialogue and negotiation between the Apostolic See and the Chinese government is a long-term process. We do not expect that the problems accumulated over several decades can be solved in one go. As long as both sides have begun to establish a relationship of mutual trust, there is no reason that we should make a pessimistic forecast or give a premature death sentence to the negotiations.

We dare to positively hope for fruitful results in the dialogue with each other because of our pursuit and perseverance in faith. A Sino-Vatican agreement will certainly be a win-win outcome and not a zero-sum game.

This is an abridged version of Cardinal Tong's article in response to news reports about China-Vatican dialogue. Cardinal Tong is the director of the Holy Spirit Study Center.