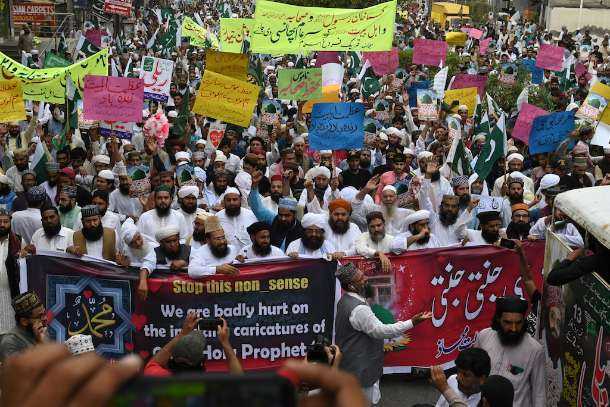 Sunni Muslims gather during an anti-Shia protest in Karachi on Sept. 13. The rallies followed a raft of blasphemy accusations against Shia leaders in Sunni-majority Pakistan after a broadcast of an Ashura procession last month showed clerics and participants allegedly making disparaging remarks about historic Islamic figures. (Photo: AFP)

Despite it being the weekend, shops remained closed on major roads of Karachi where thousands rallied against Shia Muslims and demanded the arrest of blasphemers.

Mainstream religious right-wing parties, allied with banned outfits, held mass rallies on Sept. 11 and 12 to demand stricter blasphemy laws and for the Islam Protection Bill recently passed by the Punjab Assembly to be replicated across Pakistan.

The outcry followed the detention of a Shia cleric in Karachi under blasphemy laws for leading Ziyarat-e-Ashura, a prayer that salutes the martyrs of the Battle of Karbala in 680 AD, on Channel 24 News on Sept. 13. Pakistan Electronic Media Regulatory Authority issued a notice to the news channel and suspended its license for 15 days. Its owner, Mohsin Naqvi, was arrested.

Shias, who make up 15 percent of Pakistan’s 220 million population, commemorate the massacre of the Prophet Muhammad’s grandson Imam Husayn and his family and friends at the Battle of Karbala in Iraq for refusing to pledge allegiance to then Muslim ruler Yazid ibn Muawiya.

Shias blame certain Islamic figures for events that led to the Karbala tragedy but the same people are revered by Sunni Muslims for being the companions of Prophet Muhammad.

The Sunni-Shia divide is nothing new in Pakistan.

Last year social media users reported apartment buildings displaying signs saying that the sale or rental of any apartment to non-Muslims was prohibited. Some shopkeepers refused to serve Ahmadiyas and Shias.

In June, the Ministry of Human Rights, Minority Affairs and Interfaith Harmony in Punjab launched a billboard campaign against hate and discrimination after the World Health Organization reported that 46 percent of Pakistanis who had tested positive for Covid-19 had a travel history to Iran.

Pakistan and Iran share a 900-kilometer border that is frequently used for trade and by pilgrims belonging to the Hazara community who travel to Iran for religious pilgrimages, often crossing the border town of Taftan in Balochistan province.

The ethnic group, which is predominantly Shia Muslim, has been targeted for more than a decade, with many shootings and bomb attacks claimed by armed sectarian groups such as Lashkar-e-Jhangvi.

More than 500 Hazara Shias have been killed and 627 injured in the last five years in Balochistan, according to official figures.

More than 160 people on Sept. 14 signed a petition calling for the Shia community’s security and right to worship.

The petition warned of “the weaponizing" of blasphemy laws for persecuting religious minorities and minority sects and even individuals to settle personal disagreements.

It continued: “The Anti-Terrorism Act [is being misused] to curb the fundamental rights of all citizens and minority sects and religions to worship. [There is] an attempt to impose by threat and force a mono-culture on the diverse and multicultural nature of Pakistani society via forced conversions, faith-based laws and majoritarian bullying.

“As concerned citizens, we find this situation very alarming because it is an early-warning signal of the resurgence of sectarian violence and hatred. These are all symptoms that are observed in the persecution of Muslim minorities in India under Narendra Modi, which our state otherwise denounces.”

The petition urged the government to immediately withdraw all cases registered against members of the Shia community, take action against clerics engaged in hate speech and ensure neutral law enforcement.

“The PTI [Pakistan Tehreek-e-Insaf political party] leadership must probe the matter of grave concern where the leaders of banned militant outfits find the easy way out to rename their parties and organizations and rebrand themselves amongst the general public and restart operating without any legal action and accountability with full freedom [and are] even granted security protocols by the police,” it concluded.

“SAFMA and myself fully endorse the statement of genuine concern and warn that sectarian warfare will drown every sect of Islam into an internecine conflict. This is a direct consequence of theocratization of the state as in India, Iraq. It must end now,” he tweeted on Sept. 14.

Taimur Rahman, a professor of political science at Lahore University of Management Sciences, requested the public not to support anti-Shia rallies.

“We are deeply saddened. We have seen in the 80s and 90s that a nation is destroyed whenever sectarianism strengthens. It doesn’t serve Islam, Pakistan or the public,” he said.

“The result of maintaining the dignity of the disciples [of Prophet Muhammad] has always been the opposite, leading to murders becoming a common practice. A kafir is not considered even a minority with associated rights. People demand their expulsion from government and army jobs as well as important positions. Some only demand their assassination. We have seen it all.

“Shias are a powerful minority in Pakistan. They will retaliate in any war against them. The resulting massacre will result in migration of the literate. There is no progress and education in a civil war. The government is not controlling this and the state doesn’t care about it.”

The Human Rights Commission of Pakistan (HRCP), another signatory of the petition, claims Karachi is the most affected city by sectarianism.  Five Shias, including a senior doctor, were gunned down in the seaport city last year, it said in its annual report.