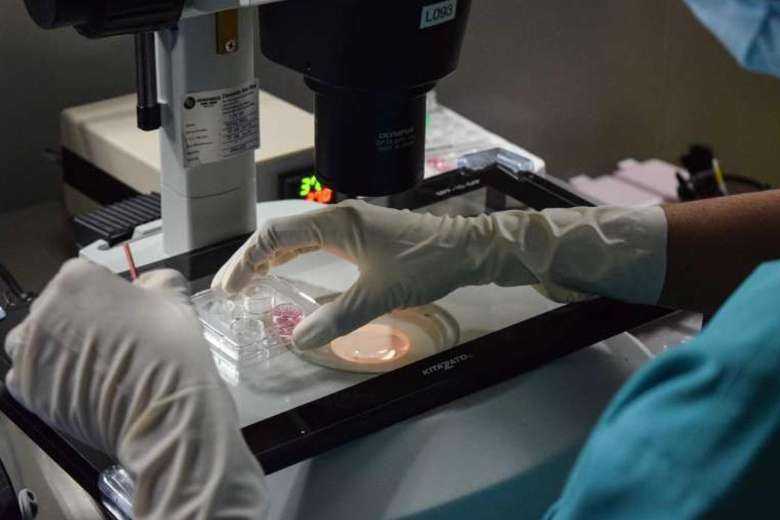 A staff member shows a mock-up of work being done on women's eggs in the laboratory at the KL Fertility Centre in Kuala Lumpur. (Photo: AFP)

The drastic slide in Singapore’s fertility rate over the past few years, further aggravated by the Covid-19 pandemic, has raised deep concerns over the country’s future economic prospects and social stability.

To address this problem, there has been much debate on lifting the current ban on social egg freezing in Singapore, a procedure whereby an unmarried woman freezes her eggs for future use to counteract the steep decline in female fertility after her mid-30s.

Proponents often point to the increasing societal trend of late marriages and delayed childbearing within the country as necessitating the use of this elective medical procedure by single women. Indeed, both the Youth and Women’s wing of Singapore’s ruling People’s Action Party have called on the government to lift its longstanding ban on social egg freezing.

Nevertheless, the high costs of this procedure would be rather challenging to the personal finances of many single women. If social egg freezing is eventually permitted in Singapore, it is very unlikely that the government will subsidize this elective procedure, given that it is not essential for sustenance of life or health but is instead attributed to personal life choices.

However, it is possible that some local companies may follow the example of US tech firms such as Apple, Google and Facebook in sponsoring elective egg freezing for female employees. This has aroused much media hype as a step towards gender equality in the corporate workplace.

There are three major objectives for a company to sponsor egg freezing. Firstly, to attract and retain talented female professionals and executives. Secondly, to enhance the corporate image of the company as having pro-family policies, as well as being supportive of women’s rights and gender equality. Lastly, to covertly encourage or even subtly coerce talented female employees to delay childbearing so that they can devote more of their youth and time to the company.

How about married female employees in similar positions who already have children and no longer have any need for egg freezing?

There may be an unwritten rule that if egg freezing benefits are available, then it should be utilized by female employees to delay having children, or else if they fall pregnant and take maternity leave, then they should expect to be skipped for promotion and be the first to be retrenched when the opportunity arises.

Nevertheless, there are a number of compelling arguments on why company sponsorship of egg freezing could be a bad human resources management practice.

First and foremost, this may contravene the much-cherished maxim of equal pay for equal work (or equal job performance), which is the underlying linchpin of corporate meritocracy. If a high-value or high-performing female employee within a company can be granted sponsorship for this expensive medical procedure, how about male employees of similar rank and equal job performance record? Don’t they deserve to be given other benefits in lieu that are of equivalent monetary value? How about married female employees in similar positions who already have children and no longer have any need for egg freezing?

At the end of the day, corporations are beholden to shareholders and obliged to focus on profitability. They should strictly evaluate and pay for work done by employees, rather than getting involved in personal decisions and broader gender-based social issues.

Second, corporate perks and fringe benefits are being subjected to increasing scrutiny by tax authorities and auditors worldwide due to the rising numbers of corruption and tax evasion cases associated with lavish corporate perks.

As a result of increasingly stringent tax laws and requirement for good accounting standards, there is a growing trend for companies to cut down on employee perks and fringe benefits while placing greater emphasis on direct monetary remuneration in the form of salaries and bonuses to ensure greater fiscal transparency and  better corporate governance.

Third, company sponsorship of egg freezing can potentially damage camaraderie and collegiality within the company. As mentioned earlier, male colleagues of similar rank and job performance may resent not being granted other benefits in lieu of egg freezing. Moreover, because companies are likely to restrict egg freezing benefits to only a few selected high-value female employees, this could provoke strong resentment from lower-level female employees who are being denied such benefits.

A clerk or receptionist can easily accept that her female superior is being paid more than her due to simple market economics, but can she also readily accept being denied egg freezing benefits given to her superior which she herself may so desperately want? Certainly, this could cause much resentment and demoralization, thereby disrupting collegiality and camaraderie within the company. According to a proverb: “One eats, another watches; that breeds resentment.”

Last but not least, corporate sponsorship of egg freezing may be sending the wrong signal to both the public and company staff by giving the impression (whether true or not) that the company workplace is not conducive for pregnancy, motherhood and work-life balance, which is why such benefits are being offered to selected female employees in the first place. Hence, this may inadvertently be damaging to the corporate image of the company itself.

In conclusion, corporate sponsorship of egg freezing should be seen as a bad human resources management practice. Companies should think twice before offering egg freezing benefits to selected female employees, given the various potential problems that it might cause.

Dr. Alexis Heng Boon Chin is an associate professor of biomedical science at Peking University, China. He had previously worked in the field of human clinical assisted reproduction research in Singapore and has authored 50 international journal publications on ethical and legal issues relating to new reproductive technologies in addition to publishing more than 250 scientific journal articles. The views in this article are those of the author and do not necessarily reflect the official editorial position of UCA News.