The return of Indonesia's prodigal radical Muhammad Rizieq Syihab (with microphone) is seen at a protest in Jakarta in October 2106. Syihab returned to Indonesia on Nov. 10 after more than three years living in exile in Saudi Arabia. (Photo: Ryan Dagur/UCA News)

He fled to Saudi Arabia more than three years ago because of charges filed against him by numerous civil society groups, particularly sex charges where he was accused of exchanging obscene messages and images with a woman.  Pornography is punishable under Indonesian criminal and internet laws, so the charges were particularly damaging to him since he was supposed to be a guardian of morality. Hence, he chose to leave the country.
Donate to UCA News with a small contribution of your choice
His return on Nov. 10 was cause for celebration among his followers, who came out in their thousands to welcome him home, raising fears about the spread of Covid-19.This fear didn’t seem to apply to him because unlike other people who return from overseas who have to go into quarantine under health protocols, Syihab freely met supporters and several public figures including politicians.The situation was exacerbated by the lack of a police presence, with many people accusing the government of pandering to radical groups.The most important issue here, though, is whether his return will have a significant impact on Indonesian politics or the Islamist movement in the country.His return had been expected by his supporters and will surely rekindle their desire to pursue a more radical form of Islam in Indonesia.Syihab has a huge following and this should not be underestimated just because he was absent for several years.

His supporters are from his own Islamic Defenders Front (FPI), which claims to have about 7 million members, plus many other conservative Muslims. 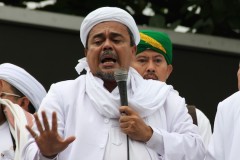 Thank you. You are now signed up to Daily newsletter
Since it was founded in 1998, the FPI has been known for its persecution of religious minorities and intolerance of freedom of expression.

Its members have been at the forefront in opposing the building of new churches and in some cases even the reconstruction of old ones. They have also often clashed with moderate Muslims who support secularism.

During his absence, the FPI was like a clawless tiger, but he could still direct his supporters via video messages, encouraging them to continue the fight against moves that he thought undermined Islam.

The cleric is known for his provocative speeches and stirring up mass protests to pressure the government, lawmakers and minority groups, but too often they involve intimidation and violence.

Syihab has been jailed twice but has never stayed behind bars for long thanks to his strong ties with members of the country’s elite.

To his supporters, he is a hero. For secularists, he is a troublemaker and provocateur, while for politicians who like to exploit religion, he is a vote getter.During the 2017 Jakarta governor election, Syihab played a pivotal role in defeating former Christian governor Basuki Tjahaja Purnama by organizing a series of mass protests after the governor was accused of blasphemy.The largest protest on Dec. 2, 2016, gave birth to a new Islamic movement called the 212 Alumni Brotherhood. It’s an alliance of several radical groups, including FPI, which continues to encourage hardline Muslims to protest for whatever cause on city streets.Islamic ShariaIn a speech at FPI headquarters soon after his return, Syihab called on Muslims to carry out a “moral revolution” according to Islamic teachings.To him, Indonesia’s government is “unjust and corrupt” and he believes the charges brought against him were politically motivated and aimed at weakening Islam."We will crush all injustice and fight against corruption," he said, which sounds good but sent a strong message to the government not to underestimate him or his followers.Some politicians see his homecoming as an opportunity to seek reconciliation. However, for Syihab, reconciliation can only come if the government agrees to and implements whatever the Islamic Defenders Front wants."If the government makes rules that harm the people, destroys religion or morals, we have to fight," he said.It’s how the FPI goes about fighting that worries the public. The FPI and Syihab are two sides of the same coin. Will he change this group’s objectives? Most probably not, because the heart and soul of the group is Islamic Sharia, which would be catastrophic for the country.While he was away, the 212 Alumni Brotherhood became popular and its core members are his colleagues in the FPI and from other Muslim organizations. This Islamist group helped defeated candidates Prabowo Subianto and Sandiaga Uno during the 2019 presidential race in the hope that if they won they could introduce Sharia more easily.Fortunately, Joko Widodo was re-elected and the hopes of the hardliners were dashed. This means their aims will likely be kept in check for the time being.

However, Widodo cannot run for another term and Subianto, who had wanted Syihab to be his running mate in the last election before he fled, is tipped to run again in 2024.

Present Jakarta governor Anies Baswedan is also tipped to run and may also court Syihab since they were allies in the race to govern the capital and both support an Islamic agenda.But in politics Syihab is also a liability. Whoever chooses him as running mate will face a public backlash, particularly from pro-democracy movements and minority groups.It remains to be seen whether he takes the political path or resumes his career as an agitator. But whatever happens, Syihab will not remain silent in his quest to end secularism in Indonesia.