The price of good health is eternal vigilance

Letting down our guard means no one will be safe from a virus that does not respect borders, race, religion or ideology 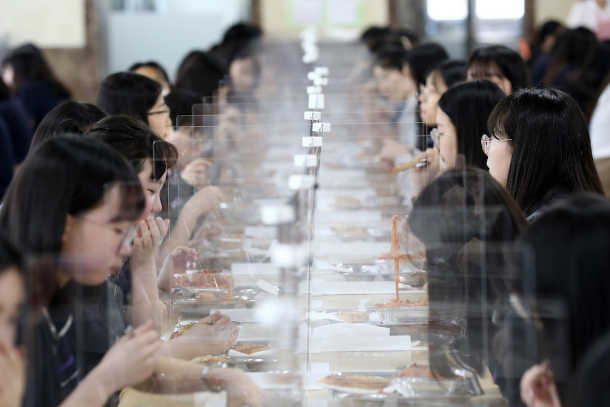 South Korean students sit behind protective screens as a preventative measure against Covid-19 as they eat lunch at a high school in Daejeon on May 20. (Photo: AFP)

Second waves of the Covid-19 pandemic are beginning to emerge across the Asia-Pacific region, even though other nations have barely felt (at least officially) the impact of the disease’s first surge.

With predictions of a vaccine not being available until 2021 at the earliest, these new surges will not be the last.

A corollary of this is that the disease, like all viruses, is also random in the way that it spreads, but contagion is usually denser in urban areas where close human contact is nearly unavoidable.

This means that outbreaks have been patchy. In India, for instance, Mumbai is in all sorts of trouble while Kerala seems largely safe, at least for now.

Similarly, in Indonesia, Jakarta is the epicenter of the virus but far-flung islands like Flores and Bali have been relatively unscathed so far.

Of course, a lack of testing accounts for some of this, but not all. Yet it is a major mistake to think that any particular town, city or region will escape the coronavirus. Its contagion is such that one infected person can infect many.

In Singapore, authorities were forced to ramp up lockdowns after infections surged in the dormitories of migrant workers, the city’s largely "out of sight, out of mind" underclass.

In South Korea, bars and nightclubs were shuttered almost as quickly as they were reopened — a matter of days — when nightspots turned out to be the center of fresh clusters on infections.

And let’s not forget China where a growing number of towns and cities are being locked down as infections spike, especially in the northeast near Russia and North Korea. Chinese experts have openly spoken about future waves of the coronavirus.

"The majority of Chinese at the moment are still susceptible to Covid-19 infection because of a lack of immunity," Dr. Zhong Nanshan, a senior medic involved in China’s top-level response, was reported as saying. "We are facing a big challenge; it's not better than other countries, I think, at the moment."

He also tacitly admitted that China’s infection numbers may be under-reported, a widespread problem in the region according to experts.

The message from these countries, all of whom have been held up as having responded best to the virus in terms of containment, is that this disease requires constant vigilance in the absence of any vaccine or cure.

Second waves of outbreaks are also emphasizing the discrimination through Covid-19 shaming that has emerged during the still-early stages of this pandemic and which is fast become a toxic byproduct of the virus.

In Singapore, foreign workers are being blamed for spreading the virus — a reaction that is unfortunately commonplace in the region.

In Malaysia, migrant workers from Indonesia and Myanmar have been blamed for carrying and spreading it when in fact the first recorded hotspot was at a middle-class Muslim summit.

In South Korea, many LGBTQ people are in hiding because a gay nightclub was named as a recent hotspot.

Chinese people were racially targeted initially in the region and around the globe. Then in Asia, it was the turn of Europeans who were accused of bringing the disease back to Asia after outbreaks in southern Europe.

Over time, there will be second, third and fourth waves of the virus simply because this slippery disease is so highly contagious. It is therefore imperative that we find sustainable new ways to interact, to work, to socialize and to worship.

As we do this, we must keep in mind that this disease knows no borders and does not respect race, class or ideology. Fighting and protecting ourselves against this virus should be something that brings us together, not something which tears us further apart.