The two-day papal visit has been eagerly awaited by 25,000 Catholics in the country of one million 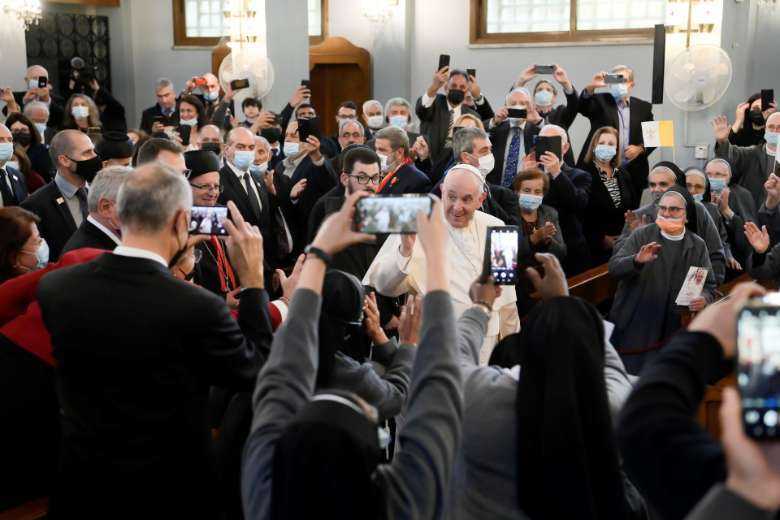 People take pictures of Pope Francis as he enters the Maronite Lady of Grace Cathedral in Nicosia's walled Old City to meet with priests and members of the Maronite Christian community in Cyprus on Dec. 2. (Photo: AFP)

Pope Francis' first prayers in Cyprus might have been invitation-only, but that didn't stop the faithful from gathering near Nicosia's Maronite Cathedral of Our Lady of Grace on Dec. 2 to catch a glimpse of the pontiff.

Joseph Diolas, 52, was among dozens waiting along the street next to the church, in front of the Kormakitis Maronite cafe. "I am here with my friends to welcome the pope," he said.

Kormakitis, his home village, was once a hub of Cyprus's Catholic Maronite minority, whose ancestors first came to Cyprus centuries ago from Syria and Lebanon.

After Turkey invaded the island's north in 1974 in response to a Greek-sponsored coup following years of ethnic tensions and bloodshed, the village found itself in the occupied area.

Many Maronites left their traditional homes in the north, and assimilated into Greek Cypriot communities where they sought shelter.

Josephina Skoullou, also originally from Kormakitis, was waiting with two friends from her village.

As police corralled people to the side of the road and the pontiff's motorcade turned into the small street, those waiting excitedly whipped out their phones, taking videos and photos as the pope drove past.

Clapping and cheering as he waved from the car just a few meters away, a few yelled "Papa!" as Francis entered the church.

Some watched the event from television screens inside the cafe, while others were determined to wait outside.

Among those following the gathering was Avril Fortuin, 57, from Cape Town in South Africa.

A Charismatic Christian rather than a Catholic, Fortuin praised the pope's focus on human rights and migrants. His visit "is extraordinary, especially for foreigners in this country", she said.

Aside from the Maronites and a small but ancient Latin community, the remainder of Cyprus's Catholic minority is made up largely of workers from the Philippines and South Asia, as well as African migrants.

Filipina Erlyn Rio, 42, was with a group of her fellow countrywomen. Clutching two large Philippines flags and a Cypriot one, they had their eyes glued to the church as the event came to an end.

"We just want to welcome the pope here in Cyprus," Rio said with excitement.

As the prayers wound up and people started to leave, one of those lingering was Sister Myriam Salameh.

She said she had travelled from Lebanon hours earlier but arrived too late for the gathering. But she was upbeat and said she was going to the pontiff's open-air Mass today.

"We are so happy to be part of this," the woman in her thirties said, a cross around her neck. "We really need the pope to come to Lebanon. We need his encouragement, we need his wisdom, we need his blessings.

"He is bringing life to the Church and we need life back in our country, Lebanon, and in our Church."