The pioneering prelate of Timor-Leste

Taking over a diocese can be a daunting task, but Bishop Basilio do Nascimento of Baucau had to start from scratch 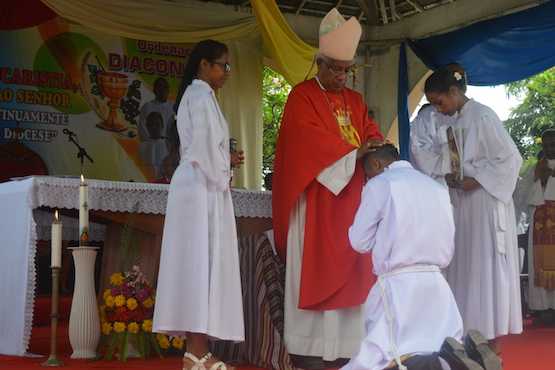 Timor-Leste Bishop Basilio do Nascimento of Baucau celebrated 21 years of his Episcopal ordination in January this year, which is almost as long as the diocese he leads is old.

The 67-year-old prelate is the first and current bishop of Baucau, about 120 kilometers east of the capital Dili.

The diocese was officially established on Nov. 30 1996, seven years after Pope John Paul II — now St. John Paul — visited the country in October 1989 and envisioned another diocese to tap the growing number of Catholics.

Timor-Leste has a population of 1.2 million, about 97 percent of whom are Catholics.

They live in three dioceses; with Baucau being the second after Dili — set up in 1940 — and Maliana is the third, established in January 2010.

Bishop Nascimento said there are many things to thank God for as his diocese has developed over the past two decades.

"First is that the dream of Pope John Paul II has become a reality, even though there are many things that need improving," the bishop told ucanews.com.

Baucau Diocese was erected to lighten the burden on Bishop Carlos Filipe Ximenes Belo of Dili at the time, as the number of Catholics was growing significantly. The pope wanted the church to provide a better service to the people of Timor-Leste.

St. Pope John Paul II's message to local church leaders was to expand and make God's presence felt among his people, and to strengthen their faith in God. After Timor-Leste's independence, the pope's message became more and more important.

"It's continuous work, though" the prelate said.

Bishop Nascimento was born on June 14, 1950 in Suai in what is now the south west of the country and ordained priest in 1977 in Evora, Portugal.

Before returning to Timor-Leste in 1994 — when it was still under Indonesian occupation — he served as parish priest and lecturer at major seminaries in Portugal and France.

He also served as Apostolic Administrator of Dili following the resignation of Bishop Belo on Nov. 26, 2002 until the ordination of Bishop Alberto Ricardo da Silva on March 6, 2004. The latter died on April 2, 2015

In 2011, he was appointed and still remains chairman of the Timor-Leste Bishops' Conference. He was 46 years old when he was appointed bishop of Baucau and he described the early days after his appointment as ground zero.

There was practically nothing in place, particularly in terms of infrastructure, human resources and management.

"There was no bishop's house, no office. Nothing," he said.

However, it was an opportunity for Bishop Nascimento and a small team of priests and religious men and women to plan for the new diocese's future.

When he started there were only 21 priests — nine diocesan priests and 12 religious priests from the Society of the Divine Word (SVD) and the Salesians of Don Bosco, as well as nuns from several religious congregations.

"It was tough because we had to serve about 200,000 Catholics at that time," Bishop Nascimento said.

"But I just surrendered everything to God's will," he said.

Building the diocese required lots of work, ranging from preparing diocesan priests, building structures, and much more, he said, adding that it has not all been plain sailing.

Structures that began in 1996 were halted in 1999 because of the independence referendum. Construction resumed after independence but things ran slowly as the country was struggling with poverty and reconstruction following the widespread violence that broke out when Timor-Leste voted to split from Indonesia.

However, in 2001, he managed to send several priests to study philosophy, theology, liturgy, and canon law in Rome.

Upon their return, they help seminarians at Sts Peter and Paul Major Seminary in Dili, which he and Bishop Belo jointly established in 2000.

Before the seminary was built those wanting to enter the priesthood had to study in Indonesia. Now, the seminary has gradually responded to the country's needs for priests, including two each year for Baucau Diocese.

"Yes, the number is small but I don't mind that. The most important thing is the quality of our priests," Bishop Nascimento said.

As of now, about 150 young men from Baucau Diocese are studying in minor and major seminaries. The prelate is concerned about making sure their formation as priests is done correctly.

"We need priests who can mingle with people and be part of their flock," he said.

With this in mind, Bishop Nascimento is optimistic about the growth of the Timor-Leste Church particularly in Baucau Diocese, just as St. Pope John Paul II wished for it "to be the salt of the world."

One thing on his mind is to continue encouraging young people to work for the church, not only by becoming priests but also through many other endeavors, including politics.

"For that purpose, we need to start with priestly formation," he said, adding that Pope Francis has also expressed hope that more priests will comes from Timor-Leste as it is Asia's most Catholic nation.

One of Bishop Nascimento's ambitions is for a new cathedral church, which has yet to be realized because of a land dispute that awaits a court decision.

Instead, the diocese uses St. Anthony Church built by the Portuguese in 1973 as its main church.

"The church is old and to small to accommodate an increasing number of Catholics," Bishop Nascimento said.

"It's frustrating particularly during Easter, Christmas and other feasts days. On rainy days, many people standing outside the church during Mass get wet," he said.

After 21 years of hard work the diocese now has more than 351,000 Catholics living in 21 parishes covering the districts of Baucau, Lospalos, Viqueque and Manatuto.

It also has 71 priests — 41 diocesan priests and 30 religious ones.

About 23 women's religious congregations and six men's assist its work.