The pilgrimage: a brief guide for young people 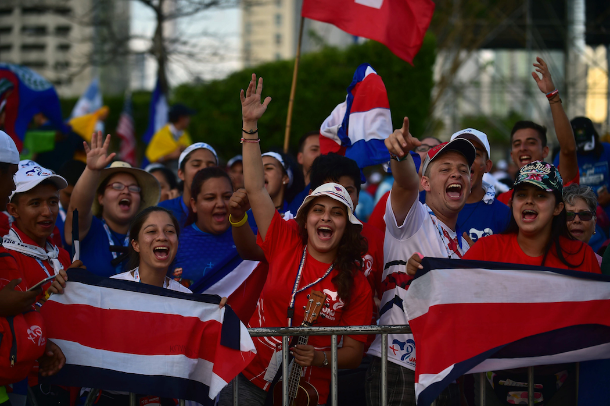 Pilgrims from all over the world crowd the historic center of Panama City on the eve of the arrival of Pope Francis for the World Youth Days, on Jan. 22. (Photo by Johan Ordonez/AFP)

As a young person from Asia, how do you go about choosing and organizing your maiden religious pilgrimage, and with what expectations?

Let's start by talking about the destination.

It may not be your first choice, but the hottest pick nowadays seems to be Europe. Obviously, there are a thousand reasons to visit Rome and the Vatican, not to mention the Camino de Santiago in neighboring Spain.

Or what about Panama? World Youth Day (WYD) in January took thousands of pilgrims to this Central American country.

Meanwhile, Martin Scorsese's 2016 movie Silence, about two Portuguese missionaries searching for their mentor, introduced us to the heroic virtues of the Japanese martyrs, and made Nagasaki a popular new pilgrimage site.

READ MORE: On the set with Martin Scorsese

And who hasn't dreamed of one day visiting the Holy Land?

Apart from the stories we hear, our desire to visit any particular pilgrimage site might relate to the people we know, for example, the nationality of a missionary priest we have met or befriended, in addition to the cultural and economic attractions of a specific country.

A friend of mine attended the recent WYD in Panama. He contrasted the enthusiasm of the Hong Kong volunteers, who took time off from their studies to attend, with the attitude of the mainland Chinese, who were more concerned about the time and money involved in organizing the trip to this far-flung destination.

He noticed there was far fewer pilgrims from mainland China compared to those who showed up at previous WYDs in Europe, which he attributed mostly to the higher cost. An open letter to young Catholics It is far more common to see people from Hong Kong making organized pilgrimages to India, as there are more missionary priests coming from this Asian country. The participants are mostly retirees and senior persons.

Maybe if a future WYD, or Asian Youth Day (AYD), were to be held in this ancient civilization, it would attract more young people from China, Hong Kong and Taiwan.

At the end of the day, however, it doesn't matter how enthusiastic young Chinese are about attending WYD — the final decision will almost always rest with their parents and benefactors.

One important thing is to treat a pilgrimage as quite a different beast from a packaged tour for tourists. A pilgrim should avoid the influence of consumerism, especially when considering where to go, who to go with, what to do, and who else would be there.

Clearly, expectations may vary as the plan is organized and implemented. In fact, they can keep on changing right until the end of the journey and beyond: some of the pilgrims' experiences, for example conversions, may not even begin until after the pilgrimage is over.

Advertisements for organized pilgrimages are shown posted in weekly Church newspapers in Hong Kong and Taiwan. Included is a copy of Taiwan's Catholic Weekly published on March 3 (right), and pages from the March 3 (bottom) and March 10 (left) editions of Hong Kong's Kung Kao Po. (ucanews.com photo)

Despite fears of commercialization, there is little doubt pilgrimages are a growing business. Travel agencies are slipping more such advertisements into church weeklies in Taiwan and in Hong Kong, in stark contrast to the traditional way of having parishes plan pilgrimages for their parishioners.

But it is worth asking these agencies, as a tour organizer, what do they expect to gain? And what can those who sign up expect?

Making sure these expectations are fulfilled depends on how well the program is organized.

It is important that all of the tour members get along harmoniously during their journey. They must be safe. Their time should be well spent. Spiritual exercises and liturgies should be woven into the itinerary, to draw them deeper into the experience. They should become familiar with the history and people surrounding the pilgrim sites.

These are all key goals that extend beyond the normal considerations of a tour, namely, eating good food, shopping for souvenirs, visiting tourist spots, taking photos and tagging others on Facebook and Instagram.

Better they get to engage in charity services in their new locality, and learn more about the characteristics and pastoral challenges of the local church community.

World Youth Day shows us that interacting with local people is one of the main reasons why young people relish this kind of experience.

Making new friends begins with a greeting and a smile, and is usually followed by a good conversation.

As such, pilgrims should be open-minded, engaging, and ready for dialogue with strangers. That dialogue should be based on mutual respect, equality and openness.

While inter-religious dialogue and debate are encouraged, young Christians should stay within the context of the Catholic Church first.

This enriches both their knowledge and experience of Christianity, giving them a stronger grounding in it before they turn their chat with people of other faiths.

The Pontifical Council for Interreligious Dialogue released a document in 1984 that can be a great reference point for young pilgrims in this regard. It is called, "The Church and other Religions — Dialogue and Mission."

Young pilgrims can carry out three of the four, as most would presumably be too inexperienced to be regarded as "experts."

Such fruitful discussion helps to expand their horizons, and encourages them to consider the Church from different perspectives.

Such exchanges with the people (strangers) they meet during their journey can only enlighten their thoughts and deepen their faith, which is a great argument for organizing that first pilgrimage now.

Lilian Wang is a research student at the Fu Jen Faculty of Theology of St. Robert Bellarmine in Taipei.