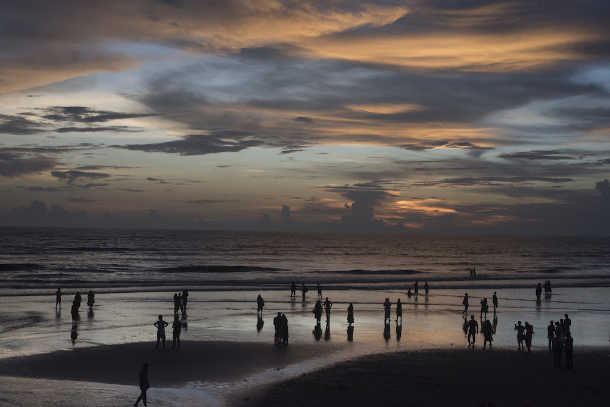 Bangladeshi people gather on the shore to look at the sunset on Inani beach, near Cox's Bazar. Dolphins and beach morning glory have returned to the area since tourists were kept away by the coronavirus lockdown. (Photo: AFP)

In mid-April, a biologist filmed a heartwarming video of a jellyfish gliding through clean waterways with reflections of the grand places of Venice, the Italian city that used to be one of the most popular tourist destinations in the world before the Covid-19 pandemic struck.

Venice has been deserted since pandemic-stricken Italy went into lockdown on March 9. The jellyfish video went viral on social media and some were elated that nature was taking back the city.

Venice, a world heritage site, is fondly called one of the most romantic cities in Europe thanks to its environmental, architectural and cultural attractions. Its heritage has also become a burden given that an estimated 30 million tourists visit every year.

Venice gasped as the water in its canals became turbid through the endless movement of speeding boats and cruise ships. In addition to pollution by tourism, petrochemical discharges from nearby Porto Marghera industrial zone were also blamed for damaging its ecology.

Thousands of miles away, Bangladesh’s beach city of Cox’s Bazar has also experienced a natural revival since the country went into a nationwide Covid-19 shutdown on March 26.

After many years, dolphins were spotted playing in the Bay of Bengal near empty beaches in April. Sagorlota (beach morning glory), a key component of beach ecology, returned and flourished. The herb, also known as railroad vine, was thought to be have become extinct in Cox’s Bazar due to unrestrained movement of tourists, pollution and the construction of buildings along the beaches.

While Cox’s Bazar does not attract many foreign tourists, it is the most popular destination for Bangladeshi tourists, who care too little for the world’s longest unbroken stretch of sandy beaches and leave them covered in litter.

The natural reset in Venice, Cox’s Bazar and other parts of the world might be one of the few positive aspects in this time of great difficulties for the world.

Who do we blame for a crisis that we had not even seen in our worst nightmares?

Fingers have been pointed at China because the virus is believed to have originated from a wet market in Wuhan city of Hubei province.

Maybe one day we will come to know what really caused this international disaster, or it may remain unresolved like the mystery of the Bermuda Triangle.

Even if the Wuhan wet market is to blame, the world cannot deny its role in failing to stop the widespread killing of wild animals and birds for food and medicine for years in China and elsewhere in the world.

For too many years, mankind’s assault has not only been limited to wildlife but has targeted almost every aspect of nature. We continue to pay the price. Extensive pollution of air, land and water is blamed for nine million deaths each year, about 16 percent of total deaths.

But we have not changed and continue to cling to our obsession with a consumerist culture and ruthless economic development at the expense of ecology.

It is hard to disagree with those experts who suggest there might be a direct link between pandemics such as Covid-19 and environmental degradation. For decades, we have destroyed forests and engaged in illegal wildlife trade that brought humans in close contact with wild animals and slowly created conditions for a massive disaster.

In many third world countries like Bangladesh, only a handful of people believe development and natural conservation can go hand in hand. Thus, deforestation, encroachment of rivers and plundering of wildlife are very common.

Brushing aside protests at home and abroad, Bangladesh has moved ahead with two coal-fired plants near the famous Sundarbans mangrove forest, a move that poses enormous threats to the environment and wildlife.

The ghosts of our ecological misdeeds have come back to haunt us. The World Health Organization recently warned that the novel coronavirus may not disappear fully from the world, which means we are not likely to be pardoned for our sins against nature anytime soon.

To be or not to be

In 2015, Pope Francis’ groundbreaking environmental encyclical Laudato si’ called pollution “a sin” and hit out at “irresponsible developments” that cause irreparable damage to the environment.

The pope also reminded us of what we often forget: “When we speak of the environment, what we really mean is a relationship existing between nature and the society which lives in it. Nature cannot be regarded as something separate from ourselves or as a mere setting in which we live” (Chapter 4, Integral Ecology).

Too often we don’t realize we are also part of nature and harming nature means we are destroying ourselves and our relationship with nature.

Even before Covid-19 reared its ugly head, Pope Francis discussed “ecological sins” during the Synod of Bishops for the Amazon last October. He even hinted at updating the catechism of the Catholic Church to include a definition of “ecological sin.”

His strong and passionate calls for an end to the throwaway culture and love for nature have resonated around the world, but a question remains about how much the world has paid heed or changed.

For years, the United Nations has failed to do enough to save our planet from pollution and degradation despite a series of climate change conferences, and it was unable to get on board the two biggest polluters, the United States and China.

Former US vice president Al Gore’s pioneering work on climate change has been appreciated globally. The international community has not adequately addressed the increasing “planetary emergency” he warned about.

Swedish environmental activist Greta Thunberg’s appeal inspired millions around the world to stand up for climate justice, but it remains to be seen how much impact her efforts can yield.

Nothing — no great book, documentary, speech or conference — can suffice to save the environment unless we change our hearts and view ourselves as parts of nature.

One day the coronavirus pandemic will be over. The question is whether we will get back to normal life as changed human beings with love for nature and wildlife. If not, the jellyfish of Venice will die away and the beach morning glory of Cox’s Bazar will disappear again.

History and future generations will not forgive us for leaving behind a worse planet plagued by pandemics and climate change.