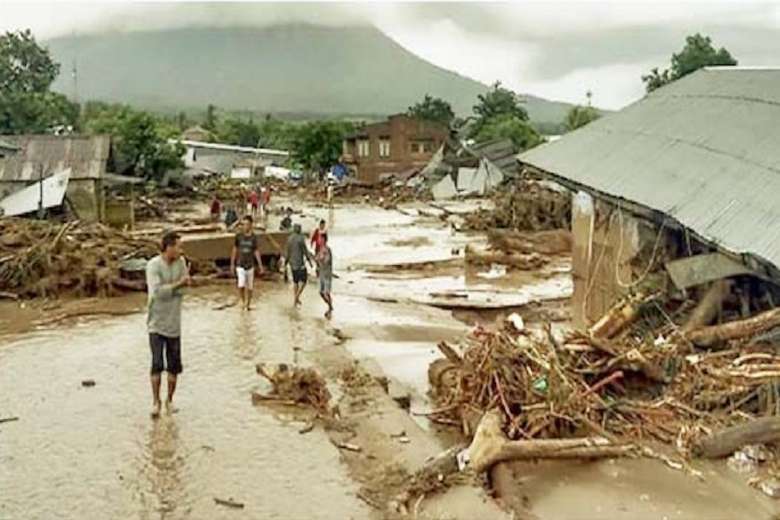 Many survivors of deadly floods that struck Indonesia’s predominantly Catholic East Nusa Tenggara province on Easter Sunday say they cannot believe they are still around to tell the tale.

A tropical cyclone brought two days of heavy rain, triggering flash floods and landslides that struck villages in the early hours of April 4 while many people were sleeping.

At least 170 people died in the floods, with 72 losing their lives on Adonara island — one of the worst-hit areas.

Veronica Masan, 28, who lives on Adonara, put her and her child’s survival down to the fact that she had stayed up late to do some baking.

“I hadn’t gone to bed because I was baking Easter cakes. Someone banged on my door telling us to run to high ground because the village was about to be swamped,” she told UCA News.

I could only pray that Mother Mary and the Lord Jesus would help, protect and save us

She said she didn’t hesitate and picked up her two-year-old child and ran for dear life.

“I could only pray that Mother Mary and the Lord Jesus would help, protect and save us,” she said.

In less than four hours, the flood had swept away dozens of homes and killed 44 people in her village.

“I initially thought thousands of people on the island must have died because it was a terrible flood with mudslides sending big stones crashing into homes while many people were still sleeping,” she said. “I now see it as a miracle because many people were saved from the disaster including my family.”

However, she still cannot believe it happened because the region is in the middle of its dry season and does not receive much rainfall throughout the year anyway.

The problem now is that if it can happen once it can happen again, she said, adding she is reluctant to return to where her home once stood.

Marius Sabon, 40, from Nelelamadike, a village in one of the worst-hit areas on Adonara, said he lost a family member in the flood.

“He was asleep when a wall of mud hit his house,” he said.

Sabon's home was also washed away. “We need blankets and mats,” he said. “We don’t know how long we will have to live in a tent. We don't have anything and have to start from zero again.”

I can’t believe so many of my family are gone

For Maria Magdalena Sura Ola, also from Nelelamadike, her loss was even greater as 11 of her 13 family members, including her husband, were killed in the disaster. At least 56 people died in her village.

She and her two children survived because they happened to be at her parents' house in another village preparing foods to celebrate Easter on Sunday.

“I can’t believe so many of my family are gone,” she said.

She and her children are now forced to live at her parents' house because hers has gone.

Father Moses Atasoge, a priest in Adonara, said it was raining very heavily when he led evening Mass on Easter Saturday.

After the Mass, he said, he couldn’t sleep and had a sense of foreboding that something horrible was about to happen.

When the floods came, church bells rang across the island to warn people to save themselves.

For those that did, their suffering will continue if aid is stopped because they have been left with nothing.

Father Lorens Yatim, head of St. Bernard Abbas Parish in Tokojaeng, one of the worst-hit areas on Lembata island, said a recent eruption at the Ile Lewotolok volcano eruption proved deadly when the rain came.

At least 45 people in his parish died and 22 people are reportedly still missing.

Big rocks and mud from the volcano slammed into the village and his church, he said.

Father Yatim said survivors have been forced to take shelter in schools and government buildings.

The cyclone hit 20 cities and districts in the province, but Lembata and Adonara bore the brunt of its wrath.

On April 9, Indonesian President Joko Widodo visited the survivors on the two islands and told them he plans to relocate them to new areas.

According to the National Disaster Mitigation Agency, at least 179 people died in East Nusa Tenggara and more than 6,000 people were still living in shelters.

Volunteers were continuing to look for 47 people the agency said were still missing.