A new extremist movement is gaining traction quickly among the Buddhist community. 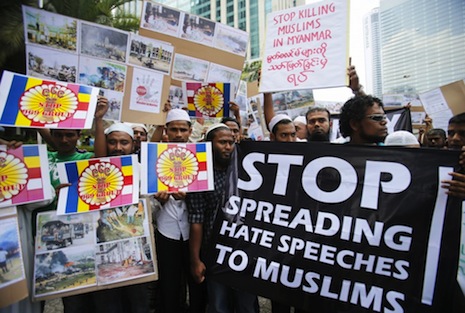 When Dr. Maung Zarni, an outspoken activist academic, labeled the ongoing anti-Rohingya and anti-Muslim movement in Burma as neo-Nazi, some Burmese said Zarni was exaggerating. Western commentators have also avoided the term.   But Zarni has been proven right by emerging photos of an anti-Muslim riot in Meiktila in central Myanmar that broke out on March 20.

The riot, which grew from a quarrel between Muslim gold shop owners and Buddhist customers, has taken more than 30 lives, and more than 10 mosques, Islamic schools and houses have been destroyed. Thousands of local residents, both Buddhist and Muslim, have fled the town, leaving Meiktila with ashes, burnt buildings, flames and dead bodies.

On the evening of March 21, the Yangon-based Eleven News published photos of a long queue of Muslims being forced to leave the town. What is significant in the photos is that the refugees, including women, children and elders, were ordered to keep their hands up as they were escorted out of the town by security guards. Nearby were local Buddhists and monks holding weapons and watching as many hundreds of Muslims left. These photos resemble the depressing images of thousands of Jewish refugees being escorted by German soldiers to Nazi concentration camps during the World War II.

It is not only the photos that make the anti-Muslim movement in Burma a neo-Nazi spectacle. The campaigners' actions and ideologies - especially ethno-religious ideology if not gender and class - resemble what characterized Nazi Germany under Hitler.

First, there is a series of consistent and observable actions. The most crucial element is the new '969 campaign' invented early this year. In a country where numerology has a powerful appeal, it is a mass-based Buddhist movement led by extremist monks including a firebrand named Wirathu. The number, 969, was derived from Buddhist tradition in which the Three Jewels or Tiratana is composed of 24 attributes (9 Buddha, 6 Dhamma, 9 Sangha).   However it is said by the movement to follow the model of the Muslim '786', which is only used in South Asian Muslim tradition, a representation of a Quranic phrase "In the name of Allah, the Most Gracious, the Ever Merciful."

The Burmese have long misinterpreted 786 as a Muslim conspiracy to take over the world in the 21st century, as they see 786 to represent 21 (7+8+6=21). In opposition to 786, the movement invented 969 as a symbol of a religious movement. Stickers are the flags of the movement and can be seen in many cities and towns across the country, as this is a public campaign.

In the past few weeks, more taxis and motorbikes have been seen with the stickers.  To the campaigners, 969 is about protecting race and religion by peaceful means. In practice, it is explicitly an anti-Muslim campaign, not about preaching people the Buddha-nature of all beings, as taught and practiced by Lord Buddha himself.

In many townships across Myanmar, including capital regions, there are local 969 committees that organize events and religious summons and distribute anti-Muslim materials such as CDs, books and leaflets.   The 969 campaign targets economic aspects by alleging that Muslims are dominating the Burmese economy, and that therefore Buddhists must not trade with Muslims. Instead, the campaigners recommend that Buddhists buy and sell at Buddhist shops that display 969 signs and stickers.

In Karen state, Buddhists are even forced to trade only with Buddhists. There are local reports about Buddhists being beaten by members of 969 civilians and monks for trading with Muslims.   As of now, 969 covers a range of shops and stores from medium-size restaurants and teashops to food stalls and street venders.

The mushrooming summons of Buddhist monks across the country these days are much about 969. Audio and video CDs of the summons as well as anti-Muslim stickers and notes are being sold at grocery stores, phone shops, tea shops and so on. Information about where the stickers and 969 materials can be bought are available online as well. The CDs are played in the streets and even at grocery stores in Yangon.

In short, 969 messages are spreading everywhere as the monks and campaigners travel across the country.

Muslims in Myanmar are portrayed as dangerous foreigners who came to the country only to dominate its every aspect. They are accused of dominating the economy, destroying the cultural fabric of society by spreading Islam in every way possible, luring women into Islam, and then monopolizing political power. The prime anxiety is that the Burmese race/nation will become extinct if liars, aliens, ruthless people, and those who bite the hands of their own masters (referring to Muslims as dogs) are not expelled.