Synonymous with national culture, the sacred liquor was once brewed by people chewing and spitting rice 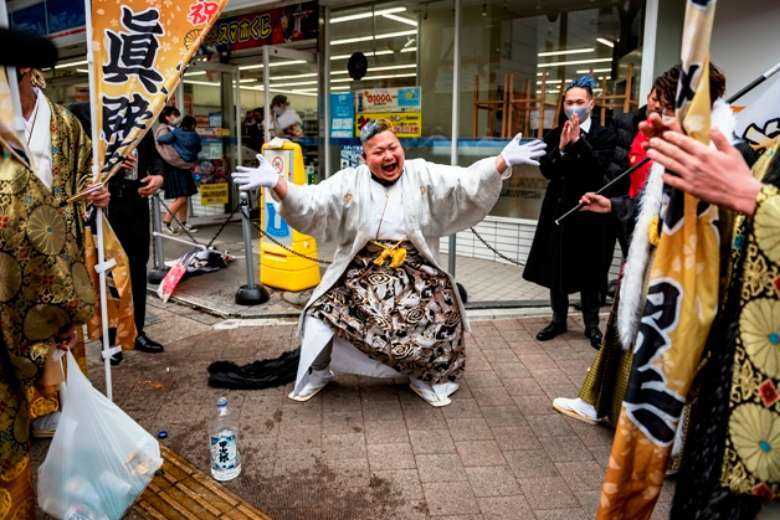 A reveler dances after drinking sake during Coming of Age Day celebrations in Yokohama, Japan, on Jan. 11. (Photo: Philip Fong/AFP)

Quentin Tarantino’s legendary katana and the ruthless yakuza can be counted among the construed myths of American Hollywoodian storytelling surrounding Japanese culture. They both provide a good example of how modern Japan is superficially fantasized, little understood and often misread to this day for entertainment's sake.

You could say that the West was shocked by the sudden modernization of Japan and started idealizing an Eden with its secular traditions and underground culture.

One of the least explored of these myths is sake, the liquor used as a cultural symbol for various religious rituals and far more mythical than the katana.

In the Kojiki, the oldest book of Japan’s history, the outspring for many mythological gods and their stories is set in the remote prefecture of Shimane. Those legendary stories speak of scenes where brewing sake is at its core and so is a shrine dedicated to the god of sake, which is the reason why Shimane to this day is considered the birthplace of the sacred liquor.

Today in Japan it is still illegal to make sake without a license. Only a few Shinto shrines have a license to brew it but they don’t sell sake as their main purpose is to carry forth a custom that is centuries old. In Japan sake is innately bonded with religious tradition.

“In fact, the oldest surviving method to make sake (doburoku) and the product in its sacred form (omiki, which is unfiltered with all the sacred grains) is used in temples as offerings to the shrine deities, and Shinto priests use it in purification ceremonies. Also in Shinto weddings, the bride and groom both drink sake to purify themselves,” says Brian Ashcroft, who with Takashi Umio Eguchi wrote a very intense and interesting book, The Japanese Sake Bible, about the history of the beverage.

However, after World War II there is no record of any shrines making alcohol from rice the old way through chewing and spitting

In Nara during the 700s, a brewing department was established so that refined sake and white sake could be made for ritual celebrations, while later Buddhist priests studying in China brought back more advanced brewing and fermentation techniques so that by the year 1000 about 15 types of sake were recorded.

But actually, the beginning of sake tradition started with a spit (kuchikamizake). According to Osuminokumi Fudoki (the record of customs of Osumi), the people in Kagoshima Prefecture would brew sake by chewing and spitting the rice.

Both in Okinawa and in Hokkaido, among the Ainu people, this type of brewing went on until the seventh century, but there are rumors of kuchikamizake being made in a shrine in the northern province of Akita as late as the 1940s.

However, after World War II there is no record of any shrines making alcohol from rice the old way through chewing and spitting. Although the practice was extinguished, a few years ago it became the central theme of a box office hit anime. So much so that a forged kuchikamizake even went on sale in some shrines as an effort to cash the popularized version.

“Apparently a shrewd professor some year ago recreated the experimental brewing in a laboratory,” says Ashcroft. “There he had four female students chew on steamed rice for four minutes before spitting it, which apparently caused jaw pain and mental sickness.”

How important was the brewing of sake for Japan can be evinced from a law in 1899 that made private brewing illegal. Overnight every sake maker became a criminal. That was due to the military expansionist policies of the Rising Sun as it needed more revenues to keep up with the conquest of the Asian continent.

It is no coincidence that at the time when personal brewing was banned, the country’s coined motto was fukokukyouhei, which translates to “rich country, strong military.” According to studies at the turn of the 20th century, one third of Japan’s national tax income was coming from liquor taxes, compared to only 2 percent today.

In a shrine in Higashi Osaka, villagers reunite to brew the sacred drink. “Everyone has to be at least 60 years old,” says the shrine's head priest Yukichi Takamatsu.

It’s the men’s job to do all the heavy brewing while the women are invested in attaching labels to hundreds of bottles the shrine will produce. They are all wearing ritual clothes including a red towel, a sign that the participant has turned 60 and is permitted to brew the sacred sake.

The guji or the shrine’s head priest explains that if the sake is brewed outside of the shrine, then the liquor has to gain the blessing of a priest in order to become sacred or omiki.

For the making of its own sake that cannot be sold, the shrine has to pay the state a fee of US$750. The century-old law is an old relic of imperial Japanese policies and makes no sense today but still weighs heavily on the shoulders of religious institutions struggling to make ends meet.

About 40 percent of Japanese shrines are on the brink of extinction as the communities that support them are disappearing. But the optimist priest sees only the bright side: “It is still worth to pay it as it keeps a tradition alive."

BRAD SMITH
I really enjoyed this post. However, it's worth noting that sake (seishu) is not a liquor. It's a brewed beverage. Some styles of sake do allow for the addition of liquor. But fundamentally, all sake is brewed, not distilled.
Reply