The monk fighting a tide of hatred in Myanmar 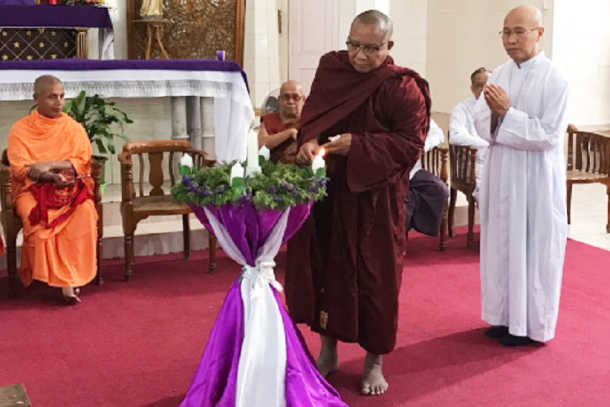 While the world keeps its eye on Myanmar’s firebrand monk U Wirathu and his encouragement of anti-Muslim sentiment, another prominent monk is also making headlines there … for entirely the opposite reason.

Ashin Ariya Wun Tha Bhiwun Sa, a Buddhist monk from Mandalay better known as Myawaddy Sayadaw, is regularly seen with leaders of Christians, Muslims and Hindus in interfaith gatherings at home and overseas, fighting the persecution of minority groups.

Myanmar is a Buddhist-majority country which has always advocated harmony, peaceful coexistence and mutual respect among its religions. Now, however, Ariya Wun Tha acknowledges the greater role of religious leaders in a strife-torn country ruled by the military for more than five decades.

“We, the religious leaders, need to play a greater role in promoting harmony among the various religions instead of sowing hatred against minorities,” said the monk.

He says monks need to guide the people on what is right and wrong and to regard it as their duty to publicly criticize unruly monks and those who spread anti-Muslim sentiment.

“The role of Buddhist monks is now important as the country is in a transition to democracy,” he told ucanews.com. “We need to make our voices louder. Open criticism does not mean a divided community — it is to maintain Theravada Buddhism.”

The country has witnessed several bouts of violence with religious overtones in recent years, much of it targeting Rohingya Muslims in Rakhine State.

Hard-line Buddhist monks from what was formerly called the Committee for the Protection of Race and Religion, or Ma Ba Tha, encouraged anti-Muslim violence in 2012 that left more than 200 people dead and forced tens of thousands to flee their homes.

Known for its anti-Islamic rhetoric, the nationalist monks’ organization has renamed itself the Buddha Dhamma Philanthropy Foundation.

Ariya Wun Tha has strongly condemned both the nationalists’ rhetoric against Muslims under the banner of patriotism and prominent monks who set up the Ma Ba Tha.

He said their acts had tarnished the image of the monkhood and Buddhism in Myanmar, and outsiders had been left with the impression that the monks were fueling hatred for Muslims.

“They [nationalists] do not represent the 89 percent of Myanmar’s Buddhist population but their voices are louder than those most monks who stay calm and choose not to speak out against them,” he says. “Actually they are so-called nationalists, backed up by political opportunists who want to gain power.”

Ma Ba Tha was established in 2013 and was influential in lobbying for a raft of so-called race and religion laws that were passed by President Thein Sein’s military-backed government before the 2015 election.

Ma Ba Tha was a strong supporter of that regime but saw it trounced in the 2015 elections by Aung San Suu Kyi’s National League for Democracy.

Under her new government, the State Sangha (a government-appointed body of high-ranking Buddhist monks) has declared the Ma Ba Tha an illegal organization and ordered it to remove all its signs.

Furthermore, the ultranationalist monk U Wirathu and another nationalist — Hla Swe, a former MP for the military-linked USDP party — have been charged with sedition over their attacks on leaders of the new government. Both remain at large despite arrest warrants being issued by the courts.

The end for the nationalists?

Ariya Wun Tha sees it is the beginning of the end for the nationalist movement and a welcome development, given they have blocked the path to peace and progress in the country.

“They don’t have a clear agenda — they are acting as they are told to do. Their role is now diminishing,” the monk said.

There are concerns, however, that the rhetoric against Muslims could intensify in the lead-up to the next election, scheduled for 2020.

“They [nationalists] might have an agenda for the 2020 election but I have no fear and will continue to fight for it,” said Ariya Wun Tha. “I will not give up my fight against the nationalist movement and their rhetoric against Muslims because it goes against the way of Buddha.”

The monk has been an active participant in interfaith activities across the country in collaboration with Cardinal Charles Maung Bo of Yangon, another vocal supporter of peace, justice and the rights of minorities.

Ariya Wun Tha was also among Buddhist leaders who held an interfaith meeting with Pope Francis in Yangon when the pope made a historic visit to the country in November 2017.