The mission to rectify illicit unions in Bangladesh

About five percent of Catholics in the South Asian country are in illicit marriages, Church says 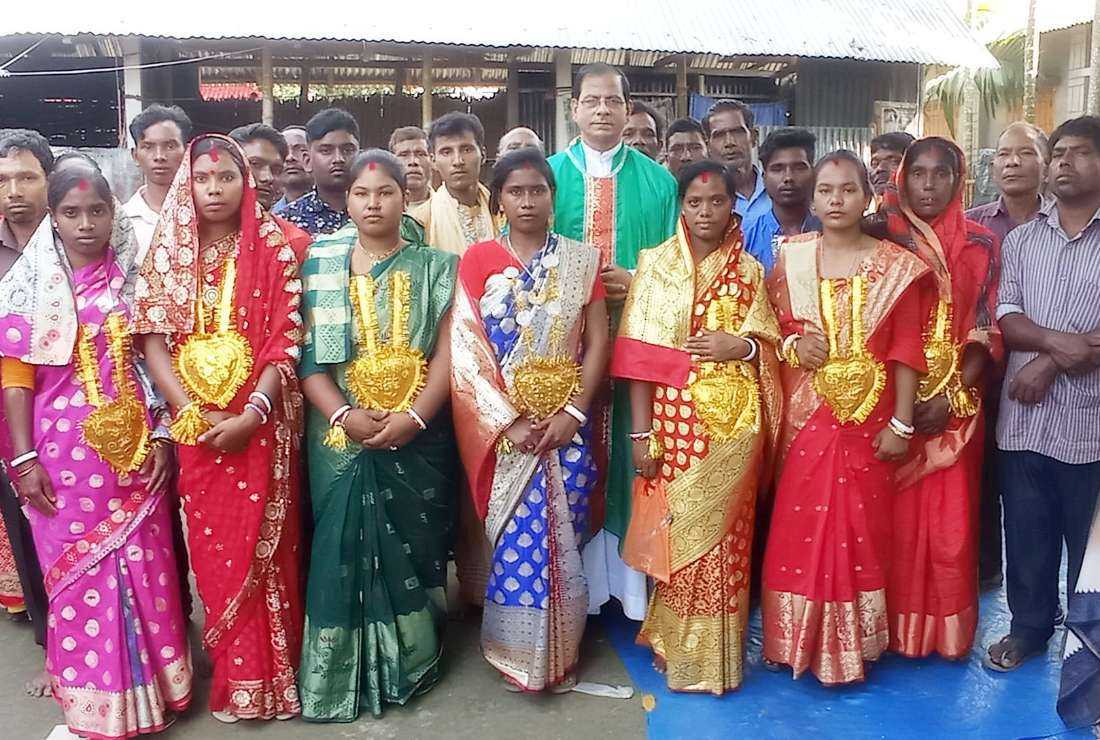 Ten couples who married outside the Church had their marriage rectified at Queen of Fatima Church in Dinajpur diocese in Bangladesh on Nov 7. (Photo supplied)

Twenty-two years ago, Swapan Das fell in love with Sabina Das but their Catholic parish in Bangladesh refused to solemnize their marriage.

That was because the bride was only 14, and solemnizing her marriage would have been a violation of Church laws and a criminal offense under national law. Both laws allow only women of 18 years and above to marry.

Das, then 23, managed to get a fake birth certificate for her and they married in a civil court in the Panchagarh district in northern Bangladesh. That meant the couple being barred from the Sacraments and Catholics in their Sarker Para village excluding them from social programs.

The life of Das and his wife changed for the better on Nov 7, when their marriage was rectified at the Queen of Fatima Church in Thakurgaon district along with their three children.

Each year their Dinajpur diocese rectifies dozens of illicit marriages, following the process of a Church law, to bring Catholics back to sacramental life and build up Catholic communities, officials said.

The Das couple were among ten others who had their marriage rectified by the Church. All of them are Catholics whose ancestors converted to Catholicism from lower-caste Hindu groups.

The tendency of contracting illicit marriages is more common among Catholics in Dinajpur, Rajshahi and Sylhet dioceses, which are dominated by ethnic indigenous communities, says Father Mintu L. Palma, a canon law expert and marriage counselor from the Archdiocese of Dhaka.

“Because tribal customs are still strong among them, many still prefer marriage in their own traditional way rather than following a Church-mandated marriage process. However, this trend is changing and such unions are becoming less,” Father Palma told UCA News.

However, there is no exact data on Catholics in illicit unions, he said.

Father Palma estimated that roughly 5 percent of some 400,000 Catholics still need their marriage rectified. It was 8 percent some ten years ago, the priest noted.

Rectification follows a canonical process for the reconciliation of marriages contracted outside the Church with the norms of the Catholic Church’s teaching on marriage.

Das, a day laborer, said that their reconciliation with the Church was made possible thanks to support and guidance from the parish priest, Father Anthony Sen, who frequently visits the village that has 70 Catholic families.

As part of the canonical process of marriage rectification, the priest prepared the couples through counseling sessions on Church laws on marriage and the responsibilities of Catholic couples after marriage.

“I am now very happy that I can receive Communion and actively participate in Sunday Mass. I have also made my confession to the priest after a long time. The happiness and calm I feel now are indescribable,” Das told UCA News.

Father Sen said that every year the parish church rectifies several illegitimate marriages after due process.

The priest said people marry outside the Church because of ignorance about Church rules and the weakness of the social structure.

“They often don't care about the Church. Many times they don't pay attention to pre-marriage classes or advice, they go to court and get married easily,” he said.

“But we go to them regularly, persuade them by the catechists and sometimes exert some pressure on them through society,” Father Sen said.

In his parish another 15 couples are preparing to have their marriage rectified next January, he said.

Each such couple needs to pay a penalty of 6,500 taka (US$63) for marrying without the approval of the Church and society.

“We fine them because we want to discourage Catholics from getting married outside the Church,” Father Sen told UCA News.

The fine amounts to three weeks’ pay for day laborers like Das, who earns about 450 taka a day.

“I have borrowed this money and now it is time to work hard so we can pay it back,” Das said.

He badly wanted rectification of marriage to get away from social humiliation. “If we continued being excluded from the Church and society, it would have a negative impact on our children,” he said.

Social pressure remains a major reason for some people like Tius Das, 51, who also had his marriage rectification on Nov 7.

He married Parul Das in court 30 years ago as his family refused to allow him to marry at the age of 21.

The couple and their three children were barred from the Sacraments and not allowed to attend social programs since. However, the family went to church on Sundays and at Christmas.

“In my heart, I also regretted and felt the emptiness of Christ's absence because I could not take Communion. Finally, I felt the presence of Christ in my heart when I went to the church after confessing my sins and getting married in the church,” he told UCA News.

“In far-flung villages, priests cannot keep in touch with all Catholics or cannot visit villages regularly,” he said. “Moreover, there is a social tendency among youth to get married before reaching marriageable age,” he said.

Swapan Das is now sure that all Catholics should get married in the Church to escape trouble for their families.

“If someone plans to get married outside the Church I will warn them against it and bring them back on the right path by sharing about my life,” he said.